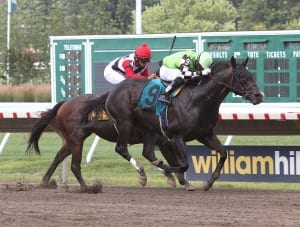 In his last race, Valid made the lead midway through the Grade 3 Salvator Mile before settling for third.

In the race prior to that, he led the Mountainview Handicap at Penn National throughout before getting pipped at the wire by Last Gunfighter.

Today, he made sure the outcome was different.

The four-year-old Medaglia d’Oro gelding hooked up with Bradester rounding the turn for home, dueled with that one for a long time, and finally edged clear to a half-length score in the Grade 2 Monmouth Cup.

It was the first stakes victory of the Virginia-bred’s career, gave him five wins from 17 starts, and lifted his earnings above the $300,000 level.  Valid was bred by Edward P. Evans and is owned by Crossed Sabres Farm.

““He ran really good today,” said winning rider Orlando Bocachica.  “Last time I rode him I went too fast and went head-to-head. This race I just let him go.”

That proved to be the winning strategy.  Valid tracked Bradester through a moderate half in 48 1/5 seconds and then began to ratchet up the pressure.  He put a head in front turning for home but did not put Bradester away until the very late stages of the 1 1/16 mile event.

“I told [Bocachica] to lay close to the pace, not get too far behind the leader, and he did just that,” said Marcus Vitali, who trains the horse at Monmouth Park.  “My horse really showed up today. He ran super.”