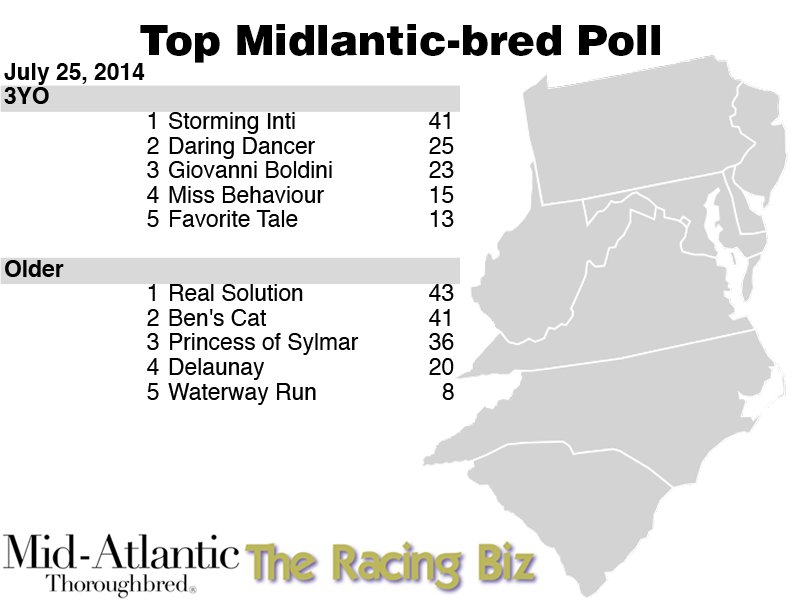 Storming Inti (three-year-old) and Real Solution (older horse) remained atop the Mid-Atlantic Thoroughbred/The Racing Biz Top Midlantic-bred Poll this week.  But the competition is breathing down their necks.

For Storming Inti, his bridesmaid-itis is beginning to give voters pause.  He most recently ran third in the ungraded Sir Cat Stakes at Saratoga — the fourth time this year he ran second or third in a stake.

The Pennsylvania-bred remained atop the list, but that might not have been the case, except for a scheduling oddity.  Maryland-bred Daring Dancer won the Grade 2 Lake George at Saratoga on Wednesday — after some voters had already registered their selections.  As a result, the filly, a daughter of Empire Maker out of Vienna Affair, by Red Ransom, received five first-place votes — more than any other horse in a widely spread vote — but not votes for any other position.

Daring Dancer, a Sagamore Farm homebred trained by Graham Motion, has won four of five career starts, including a pair of graded events.

Fourteen three year-olds received at least one vote.  Storming Inti has held the top spot since the May 9 poll, but the son of Stormy Atlantic has just a single win from six starts in 2014.

Among older horses, Grade 1 Manhattan winner Real Solution, another Pennsylvania-bred, retained the top spot — by the narrowest of margins.

The big mover on the list was Maryland-bred Ben’s Cat, whose from-the-clouds victory in the Grade 3 Parx Dash vaulted him up the list, nearly to the top spot.  Real Solution took down seven first-place votes and held a 43-41 edge over Ben’s Cat in points.  Real Solution has held the top spot since the June 20 poll.

Pennsylvania-bred Princess of Sylmar, second in the prior poll, slipped to third after running second, at odds-on, in the Grade 1 Delaware Handicap.

Six of the 10 listed horses, including both poll-toppers, were bred in Pennsylvania.  Three were bred in Maryland, while one was bred in West Virginia.  Six were males, and four were females.

This marked the ninth semi-monthly edition of the poll.