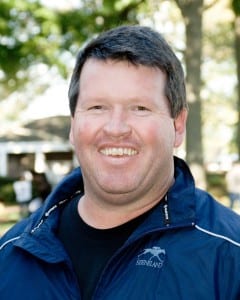 We reported Saturday on delays in analyzing blood and urine samples taken from horses at Delaware Park.  Those delays have led, in some cases, to purse moneys held up for nearly two months.  Another issue involving the new drug policy and the testing process to implement that policy may loom looms even larger.  Part 2 of two.

On July 14, the stewards at Delaware Park reported that three recent equine drug tests had come back positive for Methocarbamol, a muscle relaxant commonly known as Robaxin.

Two of the three positives came from the barn of trainer Jonathan Sheppard, one of the most respected trainers in the game and a man known for using medication lightly, when he uses it at all.

The other came from Scott Peck’s barn.  According to ThoroughbredRulings.com, Peck has not had a single ruling of any sort levied against him.

In the new world of uniform medication rules (at least in most of the mid-Atlantic), high-tech accredited labs, and a multiple medication violation points system, these positives — against two of the trainers widely considered least likely to use medication to take an edge — lay bare the genuine concern of some Delaware horsemen: what of the honest horseman who follows the guidelines and still trips a positive?

Under the new uniform medication policy adopted by Delaware and numerous other states, 26 medications — Methocarbamol among them — are considered acceptable for use on racehorses.  These may appear in post-race tests, as long as they are in only trace amounts falling below prescribed thresholds.  And the policy includes guidelines for when to withdraw the medications.

The goal is simple: to allow horsemen to use genuinely therapeutic medications on their animals while ensuring that those medications don’t impact the outcome of races or the integrity of the sport.

Yet critics say horsemen can follow the proper guidelines and stop administering medications to their charges within the set time guidelines and yet still test positive.

“We had horses racing in Maryland under the new guidelines and didn’t have any problems, but we’re concerned we may have horsemen here (at Delaware Park ) who are following the proper time guidelines regarding cut off time to administer different medications and still coming up with cloudy or positive tests,” said trainer Michael Gorham, president of the Delaware Thoroughbred Horsemen’s Association.  “I talked with Scott Peck and he was certain he had stopped administering the medication before the cutoff time.”

Sheppard, who paid a $1,000 fine for a Robaxin positive last year, said he, too, had stopped administering Robaxin well in advance of the cutoff time.

“We rarely use medications between races but in these cases these were horses that had severe muscle soreness, so we gave them some Robaxin to ease that soreness and help prevent spasms,” he explained.  “The cutoff time for giving this type of medication used to be 48 hours before a race —  then it went to 72 hours — but after our horse tested positive last year after we thought we had followed the rules, we took even greater care to stop this administering this medication long enough out before they raced. If my memory is correct, I believe it was a least a week before these horses ran that we stopped giving them the Robaxin. In any event, I know we were well outside the recommended cutoff timeline.”

Were it some other trainers, one might be inclined to take his claims with a grain of salt.  But Sheppard is a Hall of Famer with more than 3,000 wins and two Breeders’ Cup titles on the flat.  What’s more, he has earned a reputation as a consummate horseman with an abiding concern for the well-being of his horses and a respect for the rules.

Sheppard has one theory.

“Perhaps this new laboratory’s equipment is so sophisticated that it will show the presence of this medication in a horse’s system even though the horse hasn’t been administered that medication for an extended amount of time,” he said.  “I’m very confident that my staff and I haven’t done anything wrong or outside the rules and I’m also confident that will be borne out in time.”

“If it should be found that there is a flaw in the testing process or the timelines, we would hope those in charge would take action that would allow us to have a lab the horsemen as well as the track, commission and betting public could count on to be professional, accurate and correct regarding a matter that is critically important to all of us,” he said.

“When we talk about guidelines they are just that — guidelines — not etched in stone, completely inflexible regulations,” Sams pointed out, “You must remember, this policy just went active in March so it is in its infancy. While the guidelines that are in place were well thought out and researched, there will, I’m sure, be adjustments made as time goes on.”

Sams added that time and experience will help make the guidlines sharper and more beneficial to horsemen.

“The program guidelines were decided after results from a test group of 20 horse were used to simulate horses in training and the administration of different medications to those horses,” he explained.  “One area the study did not address was the interaction between medications as single medications were administered to determine proper time guidelines, so that’s an area we are going to have to look at as time goes on.”

One change Gorham would like to see is more information made available to horsemen.

“One thing I would like to see implemented is that if a test does come back cloudy for a certain substance that they tell the trainer and vet what that substance was,” he said.  “That way they could adjust their time lines on medicating that particular horse and make absolutely sure the medication will clear the system before the horse races. Every horse, like every human, has its own unique body chemistry and metabolism; and while a substance may clear one horse’s system in 48 hours, another horse may not clear that same substance for 72 hours. If a trainer knows one horse metabolizes a substance slower than usual, they can use that knowledge to make sure to err on the side of caution when setting cut off times to administer medication.”

In the meantime, though, Gorham said several private veterinarians he has talked to were “petrified” trying to do their jobs under the new policy and new regulations.

“These are good guys, professionals — not hop artists — who are trying to treat their patients (horses) and follow the rules.  But they are far from confident that even if they follow the rules and the guidelines, one of the horses they treat won’t come up with a positive test,” he claimed.

For all that, Gorham says that the DTHA’s membership backs the new policy and what it aims to accomplish.

And, indeed, there has long been a need for uniformity in medication rules and guidelines for the administration of those policies in Thoroughbred racing.  Fair competition and the integrity of the sport demand leveling the playing field.  And these steps are important to ensure the well-being of the equine athletes that star in the show.

But now that those guidelines are in place, racing has a responsibility not to let horsemen be the guinea pigs while working out the kinks of this massive program.

“While the consortium’s policy is a significant step in the right direction for racing, it is a huge undertaking,” LGC’s Sams said.  “There will be adjustments to be made and all parties concerned need to understand that.”