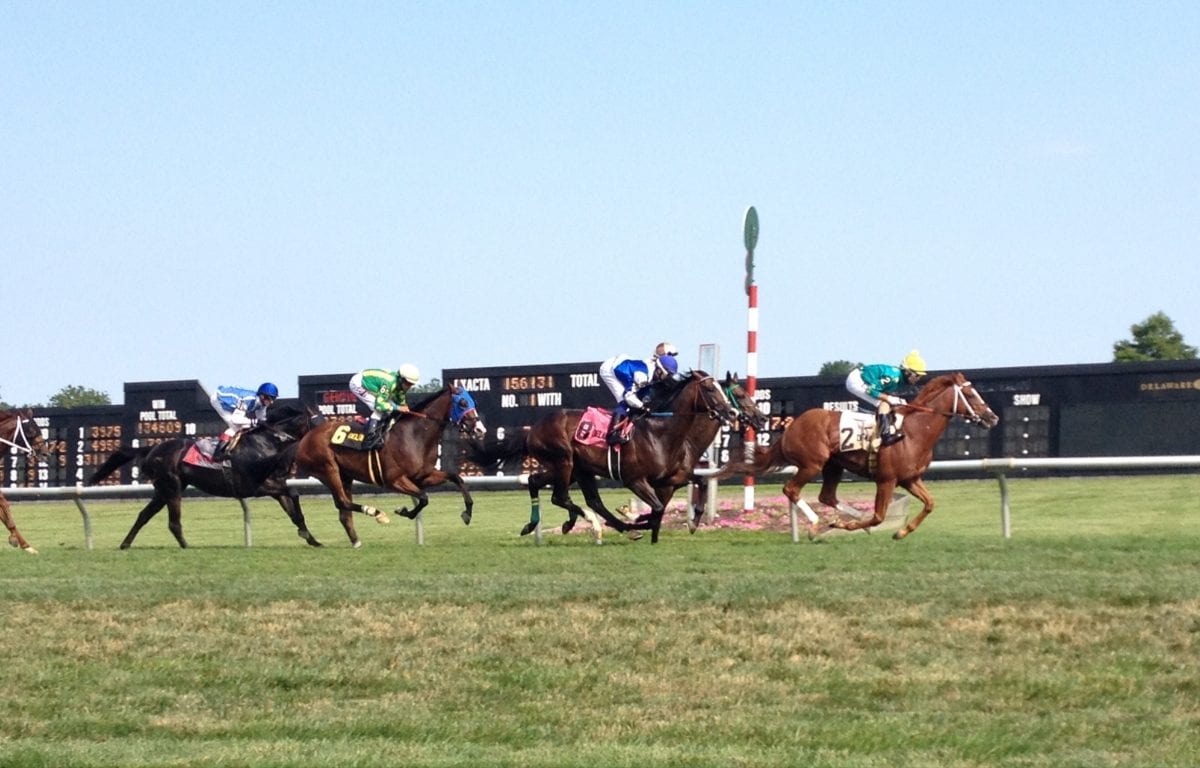 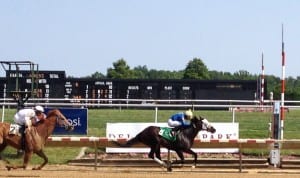 Picko’s Pride wins, but then doesn’t. Avarice (#2) was placed first after disqualification. Photo by The Racing Biz.

Picko’s Pride shot to the lead in the first jumps of this six furlong test for older horses.  Unfortunately for his connections, he also shot towards the rail, cutting off the three horses inside of him.

One stewards’ inquiry, and two jockey objections, later, Picko’s Pride, who had posted a 1 1/2-length score was placed seventh, and last.  That elevated former claiming horse Avarice, a Virginia-bred trained in Maryland by Jerry Robb, to first in his first stakes try.

“You’re never sure what they do up there [in the stewards’ booth],” said Robb of the decision.  “But I thought he should have come down quick.  He cost me the race.”

With the disqualification, Won the War ended up second and Adirondack King, third.

The two other horses Picko’s Pride bothered, King Henry and Dagburnit, finished fifth and seventh, respectively, before moving up one slot.

Avarice — who was on the wrong end of a disqualification earlier this year — has now won six of 25 starts and earned over $188,000 in his career.

Jockey Tony Black was injured in a morning spill and, as a result, taken off his mount, Winning Image, in this afternoon’s Sweet and Sassy Stakes for older fillies and mares going six furlongs.

The speedy Winning Image, the race’s defending champ, did what she does, shooting to the early lead and controlling a sharp early pace.  But in the lane, she didn’t have any answers for the powerful late run of Galiana and had to settle for second.

The Delaware-loving Galiana now has five wins in six tries at Delaware Park and eight in 13 races overall.  She’s also four-for-five at the race’s six furlong distance and owns three stakes wins over the strip.  The winner’s share pushed her career earnings over $280,000.

Winning Image has two wins, a second, and a third in four starts this year and career earnings of more than $680,000.

She’s Ordained was third.  Running time for the six furlongs was 1:08.92, just .11 slower than the Fort Delaware. 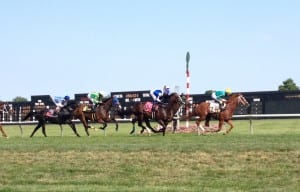 First time by in the Cape Henlopen. Photo by The Racing Biz.

Only one horse in the field for the Cape Henlopen Stakes for three year-olds and up owned a win at the 1 1/2 mile distance of today’s race on the grass.

Still, the bettors were able to suss the race out well enough, settling on Hardest Core as the lukewarm 5-2 favorite, and the gelded son of Hard Spun did not disappoint.  Trained by Edward Graham, who trains both flat and steeplechase horses, the four year-old tracked early leader Xmas Sky from close up, then sprinted clear to a dominant three-length win in 2:27.72.

Talk Show Man earned second, and late-running Holiday Star was along for third.

Hardest Core, under Eriluis Vaz, moved nearing the far turn and was clearly best under what the chart called a “mild drive.”  Xmas Sky faded to fifth.