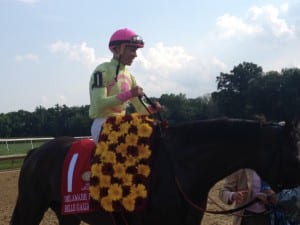 Jose Ortiz is all smiles after Belle Gallantey upset the Delaware Handicap. Photo by The Racing Biz.

With Jose Ortiz aboard, the 5-year-old daughter of After Market notched a 2 ¾ length score over the 1-to-5 favorite, Princess Sylmar with Javier Castellano.  It was another half length further back to Flashy American with Alex Cintron in third.

With no speed in the race, Belle Gallantey, claimed for $35,000 in December, controlled the pace throughout and had plenty in reserve to hold her more accomplished rivals safe.

Belle Gallantey returned $15.60 as the second choice in the field of six.  The Kentucky-bred conditioned by Rudy Rodriguez set fractions of :49.51 for the half mile and 1:13.63 for the three-quarters mile before completing the mile and a quarter in 2:01.15 over a fast main track.  Belle Gallantey improved her career record to eight wins from 40 starts with earnings of $866,270.  Four of those wins, and the lion’s share of her earnings, have come since Rodriguez dropped the claim slip on her.

Having her run in longer races and getting her to relax has been the key to her recent success.

“She was very nervous and she still is a little nervous, but we have tried to make sure she relaxes and gets comfortable,” said winning trainer Rudy Rodriguez.  “I have been galloping and she is doing much better. She had been running short and she got a very good number.  We started her going long and she just kept getting better and better.  Last time, in the Ogden Phipps, she showed she belonged with this kind and that made it easy for us run in the Delaware Handicap.”

“The pace set up very well for us today,” said winning rider Jose Ortiz.  “We just kind of went slow and easy.” 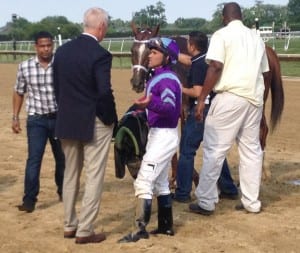 Todd Pletcher, the trainer of Princess Sylmar, did not have an excuse of his filly.  The winner of four Grade 1 events as a three year-old, she has now run second in back-to-back Grade 1 races.

“One of my concerns was not having a true pace scenario developing, which is legitimate, but we have no excuses,” said Pletcher.

“I don’t think the track bothered her and there was no humidity so it was a great day,” said Ed Stanco primary owner of Princess Sylmar. “My own view – and I haven’t talked to Todd [Pletcher] about it – I thought that over on that far turn she had the opportunity to go through and just didn’t, and that happens. That’s the part I was surprised about but what can you do? That’s racing. And then she started to come on again but the race was over at that time.

More than $4 million was wagered on the 10-race program, which included three other stakes.  That was a big jump from last year’s handle of less than $3 million.