RaceBrief for July 14: ‘Cap and Cat 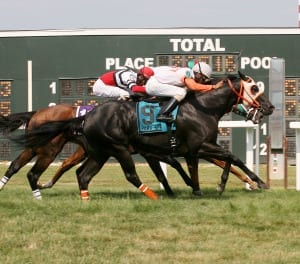 News and notes from the weekend’s mid-Atlantic racing:

[quarter]Belle Gallantey[/quarter][three_quarters]In a paceless edition of the Grade 1 Delaware Handicap, Belle Gallantey took the initiative early and didn’t look back en route to a two-plus length win.  In the process she upset four-time Grade 1 winner Princess of Sylmar, second among older horses on the Mid-Atlantic Thoroughbred/The Racing Biz Top Midlantic-bred Poll.  A $35,000 claim last year, Belle is trained by Rudy Rodriguez for Michael Dubb, Bethlehem Stables LLC, and Gary Aisquith.[/three_quarters] [quarter]Ben’s Cat[/quarter][three_quarters]Ben’s Cat — fourth on the Mid-Atlantic Thoroughbred/The Racing Biz Top Midlantic-bred Poll — posted the 27th victory of his remarkable career when he rallied from a seemingly hopeless position to win the Grade 3 Parx Dash under regular rider Julian Pimentel.  The win, by a nose over both Tightend Touchdown and Marchman, was the third straight in this event for the eight-year-old son of Parker’s Storm Cat-Twofox, by Thirty Eight Paces.  Ben’s Cat has a career record of 41-27-4-3 and earnings of $2,105,990.  He was bred in Maryland by King Leatherbury, who also trains him and, through his The Jim Stable, owns him.[/three_quarters] [quarter]Avarice[/quarter][three_quarters]Avarice, a $15,000 claim by trainer Jerry Robb in December, continued to pay dividends when he rallied from last into second and then was elevated to the top spot in the Fort Delaware Stakes.  Picko’s Pride, who crossed the wire first, was disqualified and placed last after impeding three horses, including the winner.  Avarice, a son of Not for Love-Senate Caucus, by Siphon, won his first stake and now has six wins from 25 career starts and earnings of more than $188,000.  He was bred in Virginia by Corner Farm and John Behrendt and is owned by Robb in partnership with Herman Braude.[/three_quarters] [quarter]Galiana[/quarter][three_quarters]Delaware-loving Galiana improved to 6-5-1-0 at Delaware Park when she ran down Winning Image to take the Sweet and Sassy Stakes.  The daughter of Stonesider-Baby Jess, by Interprete now has four wins from five starts at the race’s six-furlong distance and completed the distance just .11 seconds slower than the boys in the Fort Delaware.  She has won eight of 13 career starts and now has earnings of more than $280,000.  She is owned and trained by Rodolfo Romero.[/three_quarters] [quarter]Hardest Core[/quarter][three_quarters]Hardest Core, a gelded son of Hard Spun, posted the fifth win of his career in trouncing 10 rivals to win Delaware Park’s Cape Henlopen Stakes.  He rated close to the pace in the 12-furlong grass race before sprinting off to a three-length score, his first in stakes company.  He’s trained by Edward Graham for Andrew Bentley Stables LLC. [/three_quarters] [quarter]Ju Ju Eyeballs[/quarter][three_quarters]Away since October, Ju Ju Eyeballs made her return to the races a winning one when she scored by nearly two in Monmouth’s Klassy Briefcase Stakes.  At the same time, she snapped the three-race winning streak of Aquinnah, who finished third.  It was the third career stakes win for the four year-old daughter of Gators N Bears-Savvy Lady, by Smarten.  She was bred in Maryland by Don Litz.  She was claimed for $15,000 as a two-year-old by her current connections, trainer Jason Servis and owner Mr. Amore Stable.[/three_quarters]