Tom Chuckas looks back, and ahead

Tom Chuckas is the president and chief operating officer of the Maryland Jockey Club, which owns Pimlico and Laurel Park.  We spoke with him in late June to look back at the recently completed Pimlico meet and to look ahead.

QUESTION: Let’s start with a look back.  What was your assessment of Preakness weekend and the Pimlico meet as a whole?

TOM CHUCKAS: Overall I was very, very happy [with the Pimlico meet].  We seemed to be doing fairly well on the live and extremely well on the export. I think the meet was a real solid meet. We had a lot of support from the horsemen with entries. Our entries were up a little bit.

Preakness, I was happy – we had a record crowd. I think the euphoria created by California Chrome helped.  The racing was good on Preakness day.

Black-Eyed Susan day, I had hoped for more.  Unfortunately, through no fault of ours – we had the weather issue, and the card fell apart.  I considered Friday’s card one of the best cards the racing office had put together.  Unfortunately, we had a lot of turf racing scheduled for Friday that had to come off.  If you look at Friday, in the early seven  races or so, we were down a couple million dollars.  Races nine through 12, we got it all back, and then we took a hit in the last race because we had three horses [after scratches].  We had high hopes. We had a little less than 35,000 on Friday; we were anticpating 45-50.  I think we handled about 11.5 [million] roughly – I could have seen that being much closer to 15 if the card didn’t fall apart.

On the other hand though, we pulled Friday off, with all of the rain. Most of the people were happy. So I think it’s a good baseline – the brand is solid for the Pimlico meet, and Preakness and Black-Eyed Susan we’re going to continue to work on for ’15 and improve it. 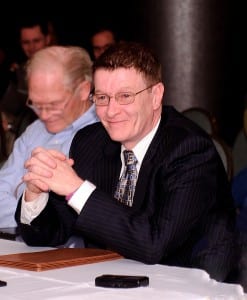 Q. One of the things you’ve spoken about before is the notion of using Preakness weekend as the foundation to build the brand and to build the meet.  How do you see the progress on that front?

CHUCKAS: If you take a look after the Preakness, our handle remained solid, didn’t fall off.  The business remained solid.  Obviously, it’s not a scientific method, but we saw more young people — you know, first-timers who had come during the Preakness or Preakness week.  A few of them stopped me along the way and said, “We had a great time, we’re back. This is a pretty good day, its not very expensive.”

I think part of the key with Pimlico specifically, we’ve become known not only for first class racing with the Preakness and some other things, but we’ve become kind of an event place. We did [a] Skrillex [concert] in June; we’re doing Moonrise [a dance music festival] in August, so we’re going to continue to try to use the facility for non-racing functions to try to get people acclimated to coming to Pimlico and see if we can’t do kind of a blend.

Some of this is trial and error, and we learn. We try to learn from [our mistakes] and adjust accoridingly. I think overall, at Pimlico we’ve worked really, really hard to upscale the brand, the experience and we continue to do that day in and day out.

Q. One of the sort of secondary story lines during the spring was the boycott of Churchill Downs by some bettors upset by a takeout increase there.  Is that something that concerns you and your team or that you monitored?

CHUCKAS: Every year we look at the takeout.  At different times over the past years we’ve tried to change and modify. We try to do a balance between what’s fair and equitable for the horseplayer and still allow us to proceed forward. You take a look at our Pick 5 – it’s at 18 percent.  We’re very sensitive to it. I would never recommend raising the takeout rates here at all. The balancing act is to provide the best service and be sensitive to the players’ issues — but we still got to make a buck.  In a perfect world, if money wasn’t an object, you would lower and lower the takeout rate, but I still have to pay the bills, I still have to pay the salaries, and find money to do that.  But I mean, Churchill has taken a hit on a couple fronts.  Is it solely the takeout rate?  I don’t know.  Field size has got to come into play; their fields have been very short… that’s something all tracks face with the quality in the fields.

Q. Looking forward a bit, one issue that has concerned horsemen locally is the status of the Bowie training center and, more generally, the 10-year deal among the horsemen, the tracks, and the breeders.  What is the status of those things?

CHUCKAS: The 10-year agreement is still in place.  The relationship between the parties is very good right now.  We all have come to the conclusion that we are much stronger and much better served if we work together for a common goal.  I think all the parties understand that to be successful, we all have to be successful.  It can’t be one or two of the groups.

Pretty much from the MTHA [Maryland Thoroughbred Horsemen’s Association] and from the breeders, that’s been the philosophy. At this time I don’t see any chinks in the armor. Do I see modifications moving forward? Possibly. We’re going to have to react to conditions and enviroment and so on like that…  There’s nothing right on the table now, but common sense would dictate to you in a 10-year agreement, conditions will be modified or changed, and hopefully the relationship is strong enough that we all continue to work together.  And the Commission’s been a big part of it, being very proactive and helping to kind of guide what’s best for the industry, as opposed to one particular group.

Q. What about the building of the new stables?  There’s been some concern among horsemen that people have been, or will be, forced out of Bowie.

CHUCKAS: That’s still proceeding forward. We’re going to build the barns [at Laurel]. There are a couple of impediments; we obviously had some issues with Anne Arundel County on the water and tax issues — it’s now all resolved — but that kind of derailed the process.  But I met with the horsemen the other day. I showed them some basic barn designs that we had, and they weren’t opposed to it. I told them when it gets a little further along that I would be happy to come back to them and show them what we think. The plan is still to build the stalls.

I was over [at Bowie] yesterday morning to go through some of the barns that are still active and get my crew to make some modifications, fix some water issues, to fix some of the shedrow issues, some of the tack room issues.

When Bowie closes you have Pimlico and Laurel. We’re going to try to do our absolute best to accommodate where everybody wants to go, but realistically speaking, someone may be sent to Laurel that wanted to go to Pimlico… so some of that is maybe some people moved that didn’t want to but wanted to be at a certain location.

I’ve told my people, and I’ve told the horsemen, that there’s no pressure on my part.  I’m not pushing anybody out.  If there has been confusion with this, I’ve apologized. You’ve got 130, 140, 150 over there now, I’ve assured the horsemen that they’re free to stay there [until Bowie closes].

In a perfect world, do I want to get these stalls built and get them out [of Bowie]?  Sure.  And it’s not because I have anything against them, but from a financial structure and everything else, consolidating is in our best interest. But I’ve told them: no one’s going to be forced to leave until the other stalls are built.

Q. It’s an election season, which also raises questions about racing’s future share of slots money in Annapolis.  Given that other states obtained slots money for racing before Maryland did, and have subsequently had fights to retain their share of it, are there lessons Maryland’s racing interests can take from those experiences?

CHUCKAS: Absolutely. If you take a look at all the surrounding states, there have been attempts both successful and unsuccessful to take some of the money back.  The best thing we can do is to get our business in order, and what I mean by that is make best efforts to become more self-sufficient, to become more profitable, to increase the brand, the quality of racing and so on.

And if you do that, you have some arguments that will improve the economics of the industry for the state and also the employment.  Then you can make an argument to maintain a greater share of the slot money.  If your’e not doing that, then you’re at total risk that you’re just taking the money and not doing anything with it. And that’s why some of the things that we’ve done — the owner-breeder bonus, the uniform medication is huge in the sense that you’re taking a proactive effort to clean up the industry and do what you’re supposed to.  The facilities are going to be an issue pretty shortly.  Internally we’re working on some plans; hopefully they’ll be ready in the next month or two to roll out.  That would be a big deal to show the state we’re serious about what we’re doing.  We – the industry participants – just have to try to be very, very proactive to try to get our business back on the right track to be self-sufficient. If you can accomplish that, I won’t say that you make it so that they can’t take the money away, but you make it more difficult.

The money that comes to the racing industry from gaming is basically a state grant.  And the purpose is to get our industry back in line and to get it back where it should be.  Anybody that looks at it that this is free money or will be here until the end of time, I think they’re making a serious mistake.  The state recognizes the value of the industry, from the farms to the racetrack.  They’re willing to support that – they recognize the economics, they recognizes the employment.  But we have to take active steps to ensure that that employment, the economics, and the business stay together. We should be using that money to build our business and put us in a position that if it lessens or even goes away, that we can survive.