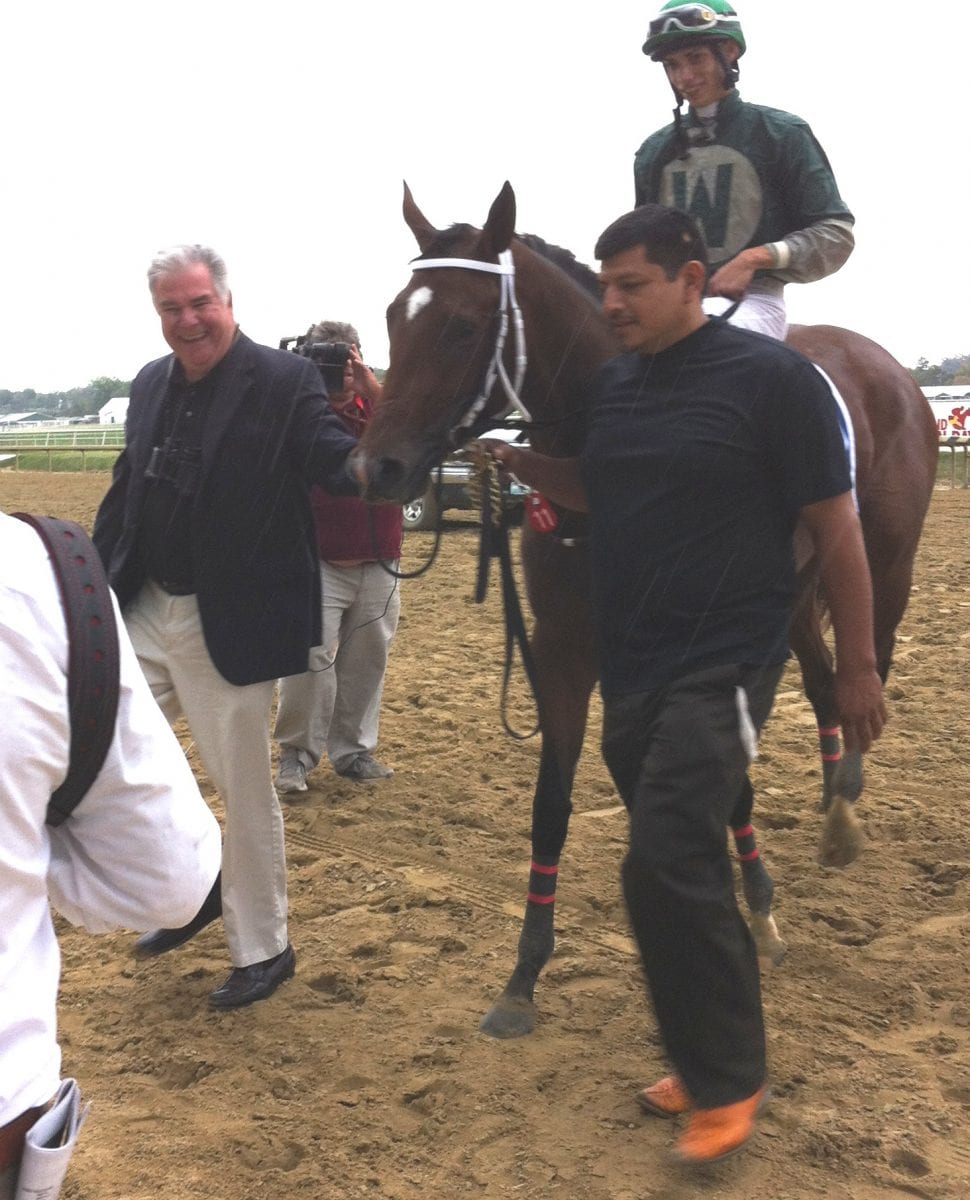 In her most recent, the daughter of Include, notched a 1 ¼-length score in the one mile $50,000 Our Mims Stakes at Delaware Park on June 4.  The Our Mims Stakes was a key Delaware Oaks prep for the Kentucky-bred.

Previously, Joint Return had a troubled trip in the Grade II Black-Eyed Susan Stakes at Pimlico on May 16.  Shortly after the start, her jockey Kendrick Carmouche lost an iron after the start and lagged behind early before finishing fourth beaten by 4 ¾-lengths.

“He lost his stirrup and she made up nine or ten lengths down the back side, so her second quarter was extremely fast and it just took a little finish out of her,” Servis said.  “She just hung a little bit late.”

Servis always looks forward to having a chance to win a big local race.

“It is a great opportunity,” he said.  “Everybody wants to win on their home court.  I spent so much time at Delaware, I enjoy Delaware and I like the people, so it means a lot to me to have this chance.  You can never win to many of these big races especially the races in the area.”

Joint Return has a career record of five wins and a third from eight starts with earnings of $228,154.  This year, she has a record of four wins from six starts including victories in the Calder Oaks and Busher Stakes.

Another who might be peaking just at the right time is Zanim Meahjohn’s Fortune Pearl.  In her most recent, the daughter of Mineshaft finished third in the Grade II Black-Eyed Susan at Pimlico on May 16.  Previously, the Kentucky-bred conditioned by H. Graham Motion won a mile and a sixteenth allowance by 2 ¼-lengths at Pimlico on May 2.  She has a career record of two wins, two seconds and a third from six starts with earnings of $92,547.

“The Delaware Oaks has been the target race since the Black-Eyed Susan,” said trainer H. Graham Motion, who won the Delaware Oaks in 2000 with Sincerely.  “She ran a big race in the Black-Eyed Susan and she has trained at Delaware with this race in mind.  I thought it was important for her to be there training on the surface every day.  I think that could help her chances.  She has been a little bit of a surprise and she has been working well, so we are pretty excited about her.”

H. Graham Motion always looks forward to having a filly in the Delaware Oaks and/or Delaware Handicap.

“The Oaks has really become a prestigious race again,” Motion said, who also won the Delaware Handicap in 1997 with Power Play.  “It has really become a race that people point for and mark on the calendar.  It is a great stepping stone race as it falls on the calendar right before the Saratoga meet.  When you have really good horses, you begin to really appreciate even more when you do not have a filly in the race.  It makes you realize how difficult it is to be competing at this level and how special the race is, so in that respect, I feel very fortunate to have had opportunities and to have this one.  The Delaware Oaks and the Delaware Handicap are both important races to me.   When I won the Delaware Handicap in 1997 with Power Play, I think it really made a difference in my career.  These are special races.”

At One Mile and One Sixteenth

(Featured image, of Aibhilin, by The Racing Biz.)