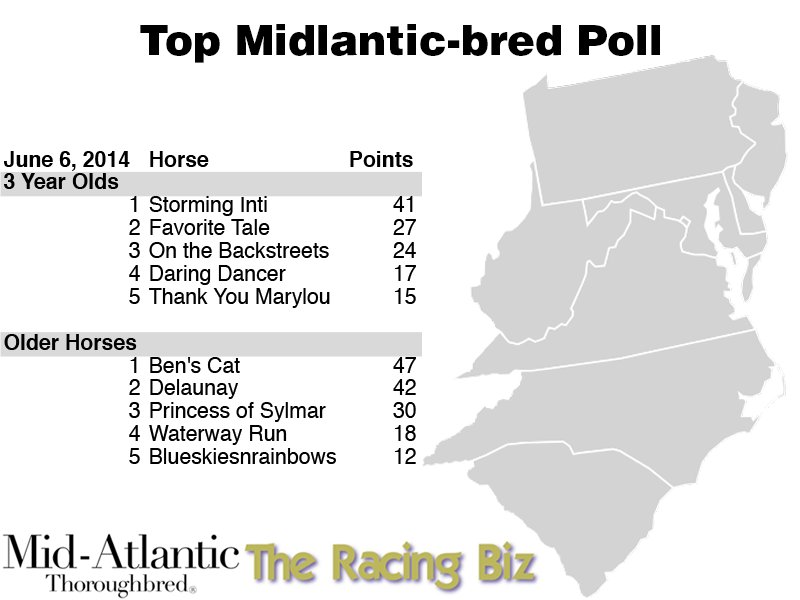 The latest Mid-Atlantic Thoroughbred/The Racing Biz Top Midlantic-Bred Poll, announced today, looks substantially similar to that of last week.  But, with a monster weekend of racing upcoming, that’s likely to change for the next poll.

Ben’s Cat remained atop the Older Horse poll, while Storming Inti — the only poll member in action last weekend — held down the top slot among sophomores.

Pennsylvania-bred Storming Inti did enough to maintain a clear lead over second-place Favorite Tale in the poll.  Storming Inti ran third in Saturday’s $500,000 Penn Mile, finishing behind favorite Bobby’s Kitten and Global View, who had bested him earlier this year in the American Turf at Churchill.

Among older horses, the week’s big mover was Maryland-bred Delaunay, who flew from the “others receiving votes” category all the way up to second-place.  He earned his second win of 2014 with an easy score in the Grade 3 Aristides at Churchill Downs.

For his career, the gelded son of Smoke Glacken out of the stakes-winning Coronado’s Quest mare Perilous Night has a record of 45-16-10-3 and earnings of just shy of $1 million — a mark he will likely hit in his next start.

For all that, perhaps the big story isn’t in the voting, it’s in what lies ahead.  Particularly among older horses, three of the top five in the poll — and another runner just outside the top five — are expected to line up in races at Belmont Park.  All four appear to have legitimate shots, with #1 Ben’s Cat and #3 Princess of Sylmar the favorite and second favorite in their respective races.

This marked the sixth semi-monthly edition of the poll.