“The Ice Box Syndrome” and other Belmont Stakes notes


Call it the “Ice Box Syndrome.”

That made Ice Box the Belmont buzz horse because, the logic went, if he could close 20 lengths in the 1 1/4 mile Derby, just think what’ he’d do in the longer Belmont!

As it turned out, what he could do in the Belmont was pretty much nothing at all.  Sent off as the 1.85-1 favorite, Ice Box was never involved and finished ninth of 12 in a race won by 13-1 Drosselmeyer.

The lesson: be wary of closers in the Belmont.

In recent years, the Kentucky Derby has largely belonged to closers.  With full fields, often partially populated by sprinters and middle distance types whose limitations are about to be revealed, fast internal fractions are the order of the day.  In Ice Box’s Derby, for example, the quarter-, half-, and three quarter-mile splits were 22.63 seconds, 46.16 seconds, and 1:10.58 — plenty of early lick for a closer to come rolling late.  In the Belmont that year, by contrast, the same splits were 24.15, 49.19, and 1:14.94, the last of which was more than four seconds slower than the Derby time.

In fact, since 2000, five horses have been at least 15 lengths back at some point in the Kentucky Derby and rallied to win.  Not one horse has rallied from so far back to attain Belmont glory.  The greatest Belmont rally in that period is that of Jazil, who won the 2006 renewal after trailing by 11 3/4 lengths after a quarter-mile.  No other Belmont winner has trailed by more than the six that Summer Bird made up in 2009.

Their combined record in the Belmont: 13-0-2-3, with five of those runners failing as the favorite.

Commanding Curve — 12 back after a quarter-mile in the Derby, second at the end — meets those criteria.

First post at Belmont on Saturday is scheduled for 11:35 a.m.

I love racing.  I understand the tracks are trying to make as much money as they can on those days when they actually attract a big crowd.  I realize Belmont is by no means the only offender in this regard.

But for the love of Pete — if it takes eight hours , it’s work, not pleasure. 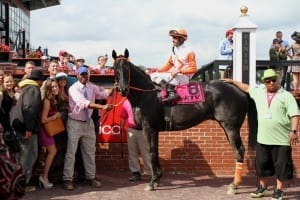 Ben’s Cat has made a habit of visiting the winner’s circle in the mid-Atlantic. But he’s never been to Belmont before. Photo by Laurie Asseo.

King Leatherbury has made, according to the DRF Formulator, zero starts at Belmont Park in the last five years.

That’s slated to change on Saturday when Ben’s Cat travels north to tackle the Grade 3 Jaipur, six furlongs on the lawn.  Ben’s Cat, the top rated horse in the Mid-Atlantic Thoroughbred/The Racing Biz Top Midlantic-bred Poll, is the mild 5-2 favorite in a tough field that includes Marchman, who’s won back-to-back graded events, and Positive Side, who was just behind Marchman in both.

Ben’s Cat has won 26 of 39 career starts, and finishing first or second here would push his earnings beyond $2 million.

One of the big debates in recent weeks has been whether there should be more time between the Triple Crown races.

Maryland Jockey Club president Tom Chuckas is on record that his ideal configuration would be a month from Derby to Preakness and another month from Preakness to Belmont.  Not surprisingly, some support it and some — not so much (here).  In addition to presenting a more congenial schedule for the Triple Crown runners, Chuckas has floated the idea of promoting new series, such as one for three year-old fillies and one for older turf runners.

Here’s some data on it:

But honestly, looking at the field for Saturday’s Grade 2 Brooklyn drives the point home.  It’s a sparse field of eight, and the group is showing just one US graded win on the page.  That belongs to Micromanage, who won the Grade 3 Skip Away at Gulfstream in March before running third — behind two of his rivals here — in the Drosselmeyer.

The favorite is Drosselmeyer winner Ground Transport, who also owns a win, in his prior start, in the Harrison Johnson at Laurel — not exactly a Grade 2 resume.

We’ve seen this movie — you know, the “win the Derby, win the Preakness, head to the Belmont” movie — a bunch of times before, and it always seems to end the same: in disappointment.

We’ve seen stumbles (War Emblem) and bumbles (Big Brown).  Funny Cide went too fast before the Belmont, and Smarty Jones went too fast in the middle of the Belmont.  Real Quiet was pipped at the wire, and Spectacular Bid stepped on a pin.

We’ve seen a racing career’s worth of heartache since the last time a horse tripled, when Steve Cauthen hit Affirmed left-handed for the first time and the two surged past Aldyar.

It seemed then that Triple Crowns were practically a birth right — three of them in six years (after the schedule was lengthened in 1969… shh.)

Nothing since, though, and the meme is that racing “needs” a Triple Crown winner.  Whatever that means.

In truth, a Triple Crown won’t solve racing’s myriad troubles.  The day after the Belmont, Belmont Park will be open for business and largely empty again.  The drug issues will the drug issues; the takeout will be too high.  PETA will still hate racing.  And so on.

Still, in sports, greatness is always good for business, and a Triple Crown — which immediately stamps its owner thusly — will certainly give a boost to the game.

And even though handicappers are, by nature, contrarians, the California Chrome story is a hard one to dislike.  From modest breeding to salt-of-the-earth connections, he’s an easy horse to like, and it’s an easy outcome to root for.

So, don’t expect a miraculous change in the game if California Chrome wins the Triple Crown, because racing doesn’t really need one in the same way it needs creative thought and improved marketing and better facilities and tougher rules enforcement.

But feel free to wake up the next morning with a smile on your face if he does it, because greatness isn’t just good for business — it’s good for the soul.