For Tonalist, little goes to plan – but it all works out 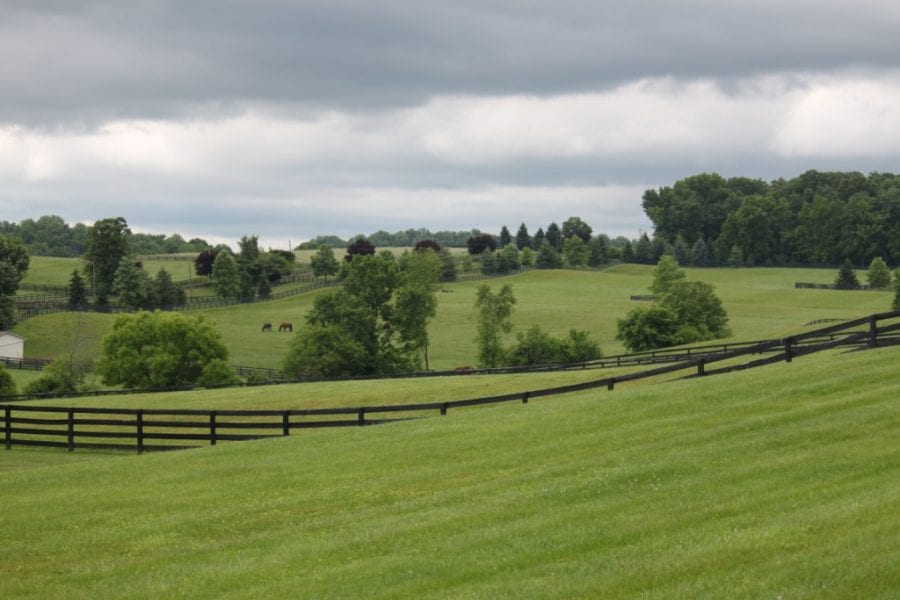 If Tonalist ever got a break, he might not have wound up in Saturday’s Belmont starting gate.  In the end, it may be that a little nostalgia and a big effort in the Peter Pan led Tonalist to try to deny California Chrome’s crack at history.

Tonalist lived as “Tap Tap” in The Plains, VA, for 14 months of his life, roaming the paddocks of Woodslane Farm, owned by Rene and Lauren Woolcott.  The Woolcotts were active in the steeplechase circuit when they decided to enter the Thoroughbred game in the midst of an economic downturn half a decade ago.

In fact, Tonalist’s story to date is one of missed chances becoming better opportunities.

The Woolcott’s mare, Settling Mist, couldn’t get into Speightstown’s book, so she was sent to Tapit for $50,000.  Settling Mist was offered at a 2012 sale, while in foal to Tapit.  But, despite a sharp rise in Tapit’s stud fee, to as much as  $125,000 in following seasons, Settling Mist was overlooked, practically ignored. 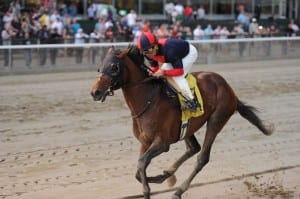 So the Woolcotts kept the mare and, for the time being, the foal that she bore.  That foal would be named Tonalist.

The next twist of fate occurred in the August 2012 Fasig-Tipton Saratoga Selected Yearlings Sale.  Despite being the latest of a distinguished family — his catalog page only goes down to the second dam and includes names like Havre de Grace, Plugged Nickle, and Riskaverse — Tonalist did not meet his $195,000 reserve.

That’s where Robert “Shel” Evans came in, with an opportunity perhaps created more by a soft spot in his heart than by a hard-headed logical approach.  Evans is the son of the late Thomas Mellon Evans, the owner the 1981 Kentucky Derby and Preakness winner Pleasant Colony, who ran third in the Belmont Stakes.  Thomas Mellon Evans never did win the Belmont.

It wasn’t, however, the physique or running style of Tonalist that caught the eye of Evans.  It was his napping, which he does after eating, after showing, after nearly any activity.

“Which is apparently exactly what Pleasant Colony use to do,” relates Lauren Woolcott, also hoping to play the role of spoiler.

Tonalist looks to crash the Triple Crown party in a venue where he just ran the best race of his young career, winning the Peter Pan Stakes by four lengths over a sloppy racetrack in May.

Trainer Christophe Clement will give a leg up to Joel Rosario, who appears to be playing musical chairs with his Triple Crown assignments. Rosario rode General a Rod in the Kentucky Derby and second place finisher Ride On Curlin in the Preakness.

The Woolcotts did finally get Settling Mist into Speightown’s book prior to selling the mare, and they now have a two-year old filly named Settle ‘N Speight.  Another broodmare, homebred Cup O’ Luck, is in foal to Proud Citizen while Oh What a Windfall has a Distorted Humor foal named Distorted Windfall.

Tonalist is not the only Belmont Stakes starter to spend a very extended summer in Virginia.  General a Rod (20-1), bred by Hare Forest in Orange County, finished eleventh in the Kentucky Derby in a troubled trip and ran an improving fourth in the Preakness.  He may be built best for Belmont Park off all the Triple Crown races, especially with his breeding. 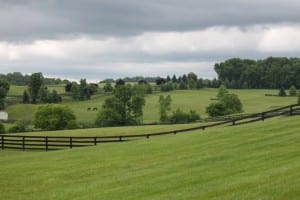 “His breeding with Dynaformer on the bottom line, should infuse stamina for the mile and a half,” noted Anne Poulson of Hare Forest.

The upswing by Woodslane and Hare Forest’s General A Rod continues a streak of Virginia breeders playing prominent Triple Crown roles despite a downturn in the breeding numbers.

There’s Quality Road, a multiple Grade one winner that would have been the Kentucky Derby favorite if not for a quarter crack discovered in his hoof the week of the race.  Another Virginia-bred, Bodemeister, ran second to I’ll Have Another in the 2012 Kentucky Derby and Preakness.

According to The Jockey Club, the number of registered Virginia-breds has dropped from 652 in 1992 to 184 in 2012.  The number of mares bred to Virginia stallions has declined from 796 to 52 over the same period.  Hare Forest and Woodslane aren’t large operations, stabling between six and eight broodmares each.

While economies of scale and logistical reasons force many Virginia breeders to have their mares deliver foals out of state — both General a Rod and Tonalist are Kentucky-breds despite their lengthy Old Dominion sojourns — Virginia breeders continue to produce quality horses even in recent years.

“To me, it’s quite logical to expect that this happens because we have beautiful, beautiful rolling countryside that has for generations been horse country,” explains Woolcott about the state’s uncanny continued success despite modest foal production.  “We’re just living in this nanosecond of misfortune where things worked out such that the Virginia Thoroughbred breeding operation was sucked out of the state.  There are always leading and lagging things when there are changes in a society, and we’re still blessed with what Mother Nature gave us.”

It’s safe to say that racing’s powers that be are hoping for a Triple Crown on June 7.

But if things don’t go according to plan?  Well, that’s Tonalist’s specialty.