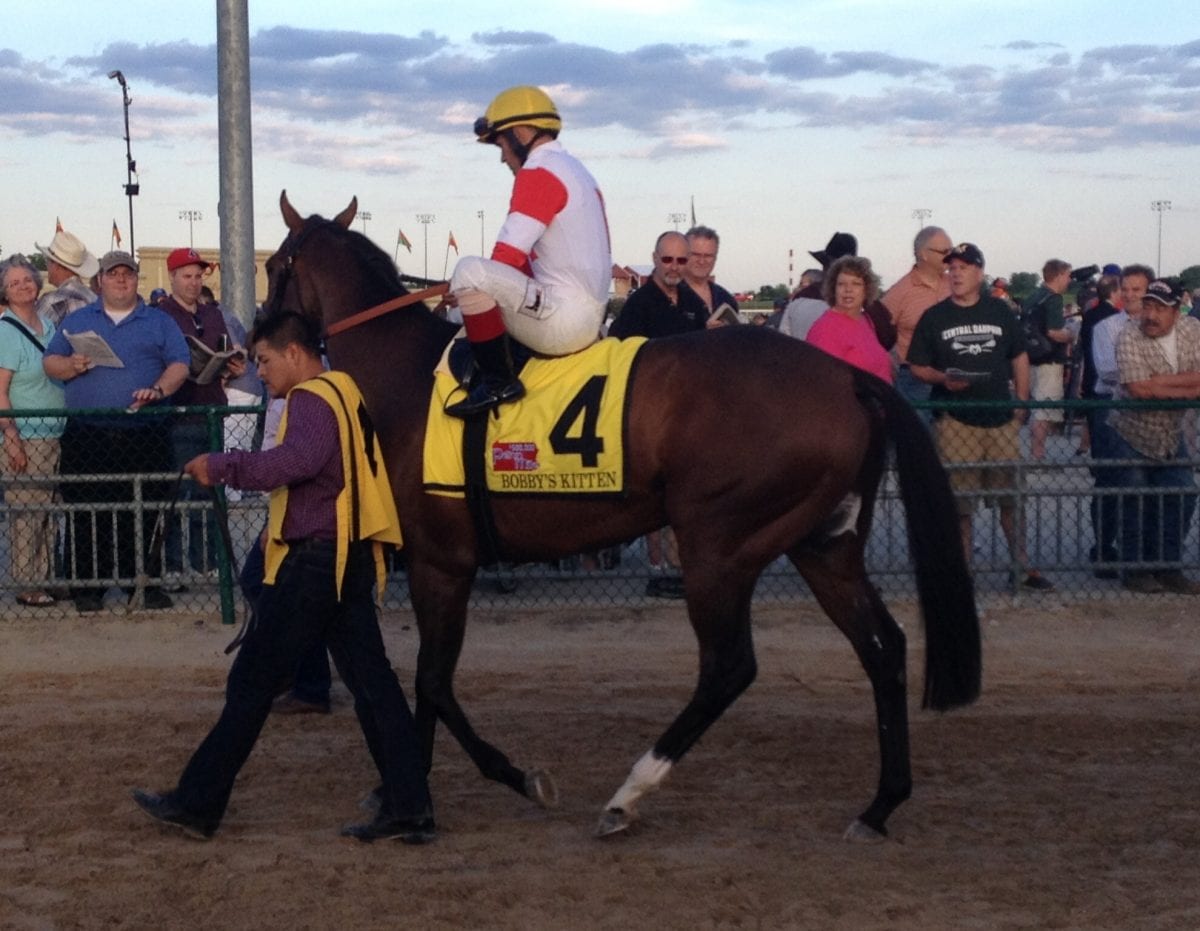 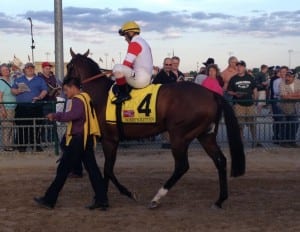 A crowd watches as Bobby’s Kitten makes his way to the track for the Penn Mile. Photo by The Racing Biz.

Chances are, Bobby Frankel never made it to Penn National.

His namesake horse — Bobby’s Kitten — made his first visit this evening, however, and made it a splashy one, posting a dominant 2 3/4 length victory in the second running of $500,000 Penn Mile for three year-olds on the grass.

“I thought he did a beautiful race,” said Jeff Ramsey, the son of co-owners Ken and Sarah Ramsey.  “It went really, really well.”

Indeed it did.  Under jockey Javier Castellano, the son of the Ramseys’ uber-stallion Kitten’s Joy, out of the winning Forestry mare Celestial Wood broke alertly, sat comfortably off the…

Wait, what was that?

The horse who’d run on the lead of every previous winning start, who notably set absurdly fast fractions before finishing third in the Grade 1 Breeders’ Cup Juvenile Turf last November, and who just last month packed it in after failing to make the lead in the Grade 1 Bluegrass at Keeneland tonight bided his time behind hopeless longshot Sing the Dream through moderate fractions before zipping past that rival to open a clear lead before finishing under a hand ride.

Rider Javier Castellano, who won three of the four major races on the card, agreed.  “He was wonderful today,” Castellano said.  “I really like the way he did it today.”

Global View and Storming Inti rounded out the triple.

As the crowd in the winner’s circle began to thin, the trio of buglers began to belt out “Fugue for Tinhorns,” the paean to horse racing from “Guys and Dolls.”

“I got the horse right here, his name is…” 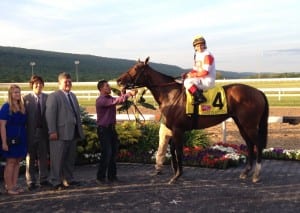 Stephanie, William, and Jeff Ramsey smile for victorious Bobby’s Kitten after the Penn Mile. Photo by The Racing Biz.

It seemed apt, this song from a musical about a lost New York swelling after a horse named for a late trainer.

“Bobby was one of my dad’s favorite trainers,” said Jeff Ramsey, who attended the race with his son William and daughter Stephanie, all three of whom have Kitten horses named for them.  “They get along really well and had a lot of big times together.”

When Frankel passed away, Ken Ramsey decided to name a horse in his honor.  Along with trainer Chad Brown, he narrowed his choices down to two horses, both of whom, Brown said, were extremely talented.

Together, they settled on this horse and named him Bobby’s Kitten.  He’s now won four of seven career starts with earnings of just shy of $600,000.  He’s likely headed, Ramsey said, to the $1.25 million Belmont Derby in July.

And the other horse?  He’s not running, Ramsey said.

The running time of today’s second running of the Penn Mile was 1:35.82, nearly two seconds slower than the 1:33.99 posted by Rydilluc in last year’s inaugural event…

Kitten horses have finished in the exacta in both runnings of the event; Charming Kitten ran second last year…

Chad Brown’s two runners finished first and third, with Pennsylvania-bred Storming Inti along for the show spot, a nose ahead of late-running Divine Oath…