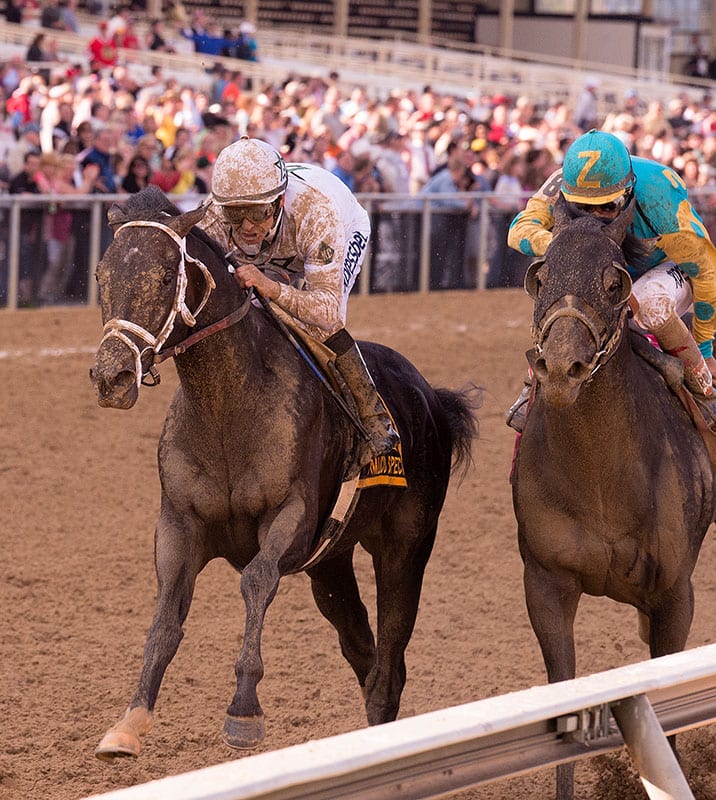 The Todd Pletcher-trained 4-year-old was slow to get into stride over the racing surface that was turned ‘sloppy’ by 2-1/4 inches of rain that fell during the morning hours but was upgraded to ‘fast’ shortly before the 44th running of the Special.

After trailing the nine-horse field by open lengths heading into the backstretch, the son of War Pass leveled off under jockey Mike Smith and steadily made progress heading into the far turn, where he began to circle the field.

“That was a good win,” said Pletcher, who also won the Grade 2 Black-Eyed Susan Stakes earlier on the card.  “He came from way, way off it (the pace). We didn’t anticipate being that far back, but I felt a little better when the fractions were as fast as they were.”

Revolutionary loomed as a wide threat at the top of the stretch and kicked in with a determined bid to catch Prayer for Relief at the wire by a neck. Cat Burglar finished another 1 ¼ lengths back in third.

“I started picking up horses about the 4 ½-pole,” said winning rider Mike Smith.  “Going past the five-eighths, he really started to level off and I felt very confident that he was going to run well.”

“I am very happy with the day considering where we were this morning,” Maryland Jockey Club president Tom Chuckas said. “At 5:30 it was raining sideways and you couldn’t see.  The card got pulled apart with six races coming off the turf creating a lot of scratches which made it difficult. But overall I am pleased. My team did a great job and worked hard under adverse conditions. The track was fast by the end of the day and we will be good to go on the turf tomorrow.”

The Ultimate Girls Day Out festivities also included an infield concert with the Counting Crows, The Fray and Annie Bosko and a keynote address by Academy Award-nominated actress and author Mariel Hemingway at the inaugural Morgan Stanley Women in Business networking event & luncheon in the Preakness Village. Proceeds benefitted the Maryland Affiliate of Susan G. Komen for the Cure® and Baltimore-based Suited To Succeed.

Revolutionary, who paid $6.40 to win, earned $180,000 for his fifth victory in 12 lifetime starts. Last year, the Kentucky-bred colt won the Withers (G3) and the Louisiana Derby (G2) before finishing third in the 2013 Kentucky Derby. He had not won a race since capturing an allowance test at Gulfstream Park to start 2014 and most recently finished second in the Oaklawn Handicap (G2).