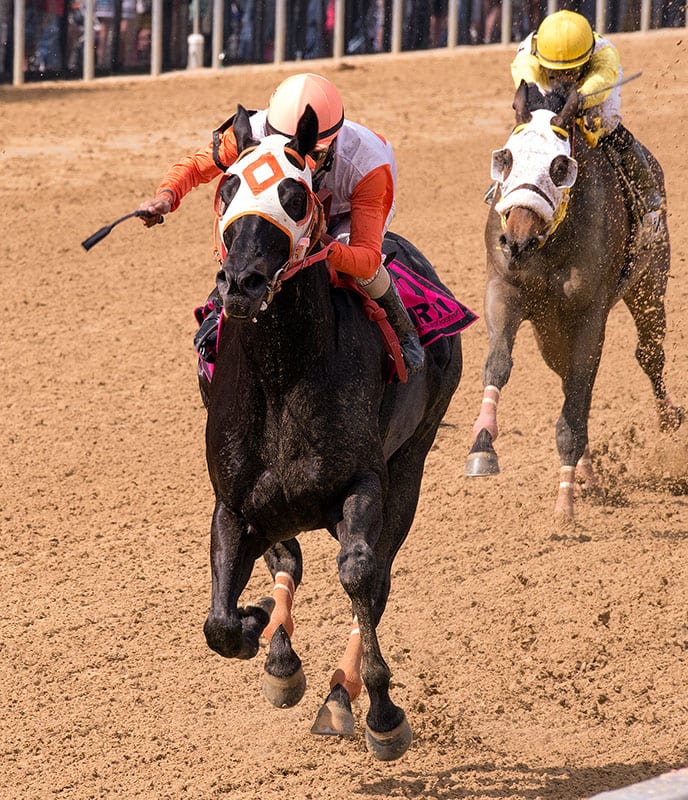 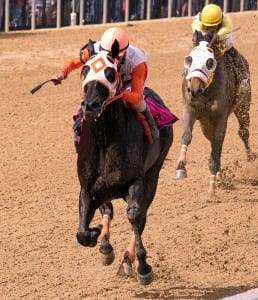 Turf or dirt makes little difference to Ben’s Cat, who was much the best today. Photo by Jim McCue, Maryland Jockey Club.

The Jim Stable’s Ben’s Cat maintained his amazing winning ways Friday at Pimlico, winning the $100,000 Jim McKay Turf Sprint for the third time. The victory was his 21st in stakes competition and 26th career win from 39 starts, a ledger that also includes five consecutive wins in the Mister Diz Stakes.

King Leatherbury bred, owns and trains Ben’s Cat, an 8-year-old gelded son of Parker’s Storm Cat. The field for the Jim McKay was whittled down from nine starters to four after the race was switched from the grass to the main track but the racing surface seems to make little difference to this runner.

“I was hoping for the slop,” Leatherbury said.  “He really loves the slop.”

Regular rider Julian Pimentel sent Ben’s Cat after the speedy leader, Great Attack, and pushed ahead at the eighth-pole. Ben’s Cat reached the finish line in 57.75 for five furlongs, winning by 1 ¾ lengths over a ‘good’ track. Great Attack was second and Smash and Grab finished third. Ben’s Cat was the overwhelming favorite, paying $2.80.

“I just have to hold on,” Pimentel said of his riding style aboard Ben’s Cat.