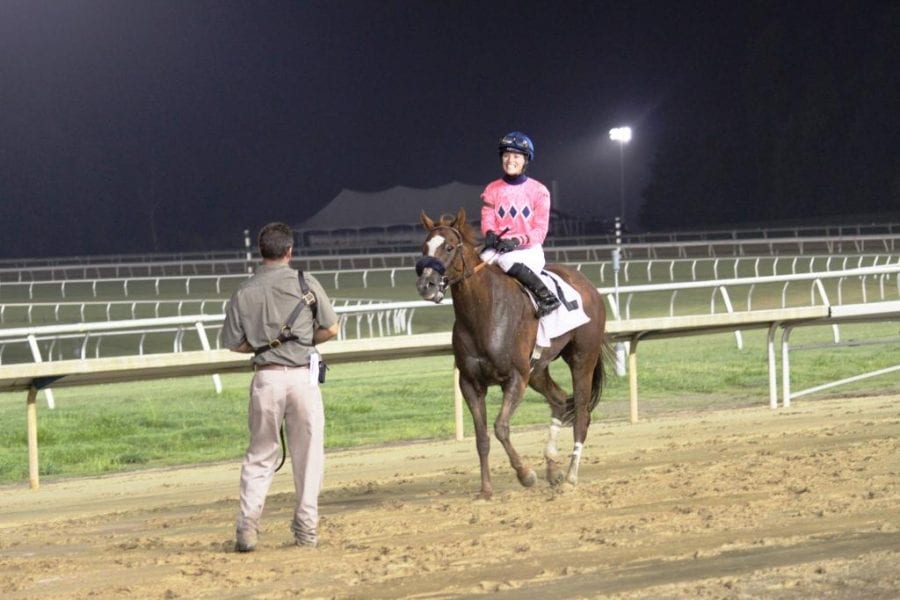 She’s 15-1, and you may need to use a little imagination to get Susan Cooney’s Embarr into the $150,000 Gallorette (G3) winner’s circle Saturday afternoon.

But to Susan Cooney, the six-year old mare’s chances are very real.  The ten horse turf field going a mile and a sixteenth could be considered as Cooney’s Preakness.

If Embarr wins, Cooney’s name can take up an entire column in the winner’s circle photo as the breeder, owner and trainer.  The remaining lines are left to her sire Royal Academy, dam In too Deep by an Irish stallion The Deep, and jockey, usually Forest Boyce.

It was the idea of Cooney’s Irish husband Patrick to name Embarr after what Susan Cooney describes as an immortal, white horse of Irish lore who could gallop over the earth without dirtying a hoof and skim the seas without wetting a hair on his tail.  The Embarr fable is thousands of years old but the story began to appear in print in the 1880s. 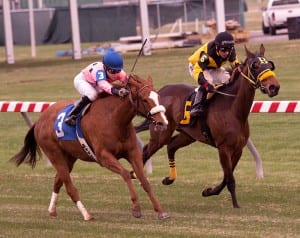 It’s already getting easier to see that win.  After all, Embarr’s very name means Imagination.

Embarr has eight wins in 25 starts, including the last two runnings of Dahlia Stakes at Old Hilltop.  She has four wins from five starts on the Pimlico lawn, with her only defeat coming in last year’s edition of the Gallorette, where she ran sixth.

That day, she was five wide, but her regular jockey, Forest Boyce was under direction to swing wide.

“A lot of people want to say Forest didn’t do a very good job and got caught wide, but that’s her (Embarr’s) style,” Cooney explained.  “She runs best when she pulls here out coming around the turn and comes up the middle of the track.  She does not like to be in-tight on the rail.  All her wins are when she circle’s the field on the outside.”

Horseplayers regretted not using their imagination when Embarr broke her maiden at Colonial Downs paying her backers $64.80.  Two starts later, in the $50,000 Brookmeade at Colonial Downs, she scored again and paid $51.20 to supporters.

“Early on, I knew she was going to be good.  She had always shown good work ethic and some speed.  She has good action for a turf horse.  She barely picks her feet off the ground,” said Cooney about her Virginia-bred.

Her price has trended downwards since then except when running in graded stakes company, as she is on Saturday.  With Friday’s rainfall, Cooney believes the turf is in her favor — something which was not the case in last year’s Gallorette, when Gallorette zipped a half-mile in 46 3/5 seconds and never looked back.

“Pianist got loose on the front and I don’t think anyone thought she would go that fast and not come back.  It made it very tough for a closer and you couldn’t make up ground.  With the soft turf this year, that’s not going to happen.”

This mare means so much to Cooney that she said she would never sell either Embarr or any of her offspring.  Still, winning winning a graded stakes with Embarr, especially in the mid-Atlantic, would have real meaning for the trainer.  Cooney sees Somali Lemonade (7-2) as the horse to beat, and she knows favorite Strathnaver (3-1), who beat Embarr in last fall’s Lady Baltimore at Laurel.

Still, Embarr is talented enough that, in the right circumstances, she could find the winner’s circle on Preakness day.  Picture it: all it takes is a little imagination.