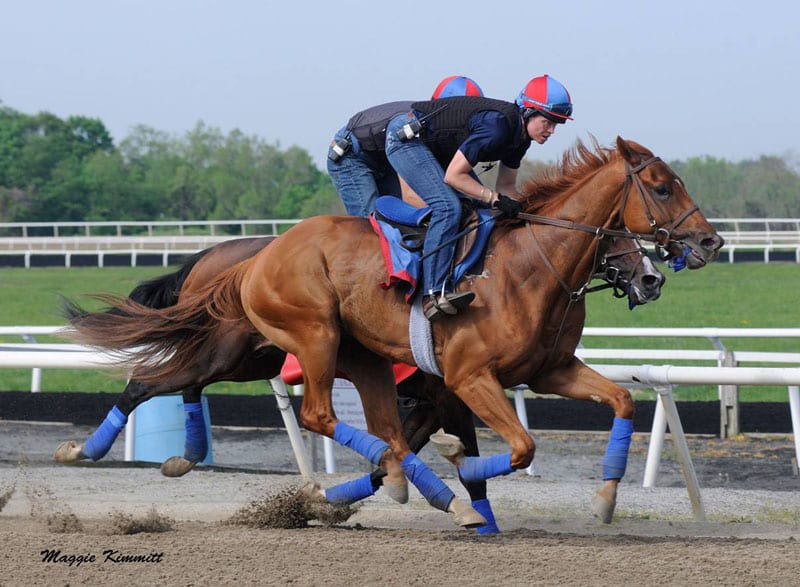 Who is Ring Weekend?

While on the outer edge of the Kentucky Derby trail, Ring Weekend hails from a barn that is familiar with success in the Run for the Roses. Trainer Graham Motion has already won a Derby with Animal Kingdom and he represents the hopes of Maryland-trained runners in the Preakness. The Tapit colt based at the Fair Hill Training Center has won twice in four starts this year, including a victory in the Grade II Tampa Bay Derby before running second in the ungraded Calder Derby.

What they’re saying about Ring Weekend

“So far, so good,” Motion said after Ring Weekend worked six furlongs in 1:13.1 over the Fair Hill strip on Saturday morning. “He galloped out the mile in 1:41. That’s what I was really most pleased about. He went out for a long jog on Sunday morning and everything went well. He jogged about a half-mile here behind my barn.”
[boxify cols_use =”3″ cols =”6″ position =”right” box_spacing =”5″ padding =”3″ background_color =”gray” background_opacity =”10″ border_width =”1″ border_color =”red” border_style =”dashed” height =”250″ ]Ring Weekend File

Ring Weekend has actually made seven starts in his career at six different tracks and is no stranger to success on the dirt. He was fifth in his debut last summer at Saratoga, then was third in consecutive tries at Churchill Downs and Keeneland. He finished second in his seasonal debut at Gulfstream Park then won there in February against maiden special weight rivals before capturing the Grade II Tampa Bay Derby in a dominant, 14-1 upset.

Although he has displayed a fondness for dirt surfaces and boasts a Grade 2 victory, Ring Weekend still has plenty to prove. After breaking his maiden at Gulfstream he bypassed all of his allowance conditions and went directly into stakes company and is still eligible for non-winners of two other than conditions. He also appeared to dodge many of the serious horses on the Derby trail this winter while competing in Florida.  He lost the Calder Derby by nine lengths to Our Caravan, who subsequently ran sixth in the Grade 2 Peter Pan.