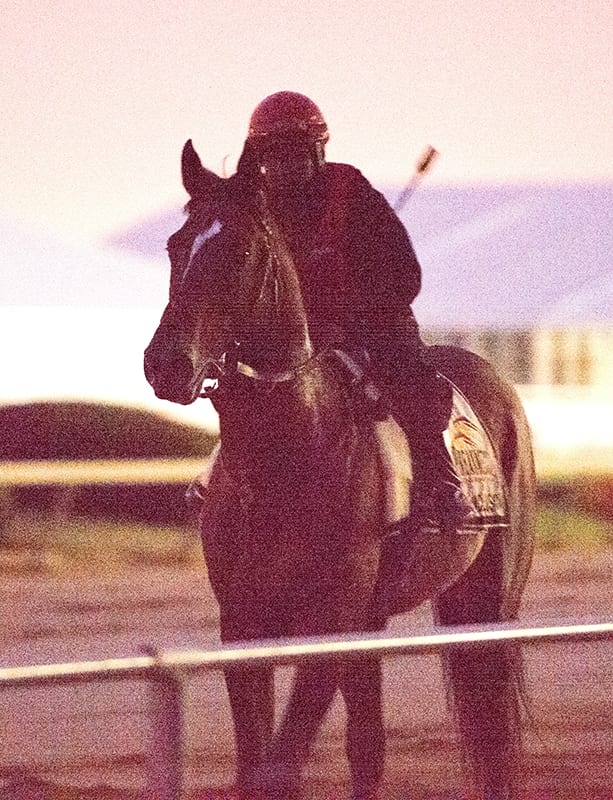 “He galloped out a mile in 1:41. That’s what I was most pleased about: how he galloped out,” said trainer Graham Motion, whose Preakness prospect was ridden by longtime assistant and exercise rider Alice Clapham.

Ring Weekend, who captured the Tampa Bay Derby (G3) and finished second in the Calder Derby, missed the Kentucky Derby due to a fever. The gelded son of Tapit missed a few days of training but has been training well since the setback.

“So far, so good,” said Motion, who will continue to monitor Ring Weekend’s training before committing to the Preakness.

Trainer Wesley Ward was especially upbeat Saturday as he talked about Pablo Del Monte’s six-furlong breeze in 1:12 1/5 at Keeneland, the colt’s final workout for the 139th Preakness Stakes.

In a change of plans, Pablo Del Monte, who finished third in the Blue Grass Stakes (G1), will be shipped from Lexington, Ky. to Baltimore on Monday rather than on Wednesday. He will be one of five Preakness candidates arriving at Pimlico that day.

High Wire Kitten, owned by Ken and Sarah Ramsey, is headed to Baltimore to run in the Hilltop Stakes on Friday.

“She has been working very, very well. It’s a good workmate for him,” Ward said.

High Wire Kitten and Pablo Del Monte have breezed together for about a month.

“Two weeks out from the Blue Grass we put her six or seven lengths in front and it was tough on him to catch her, and he did,” Ward said. “John Velazquez worked him that day. I think he ran so hard in the Blue Grass that it had an effect on him, but now he’s really getting to her. And she’s working very, very good; she working three-quarters of a mile in :12 herself. And they are finishing heads up.

“It’s everything you’d want to see in the last two works. He’s coming into this race as good as he could possibly be and doing everything right. I really think that Mr. Ramsey’s filly is going to run a big race in the Hilltop Stakes.”

Ward said he feels good about how Pablo Del Monte is doing a week out from the Preakness Stakes. He made the decision to move up the shipping date by a couple of days because the Monday flight is leaving from Lexington’s airport, which is very close to Keeneland.

Rontos Racing Stable Corp.’s Social Inclusion visited the racetrack extra early Saturday morning for his morning exercise. Training hours were limited to one hour between 5 and 6 a.m. in order to accommodate “Canter for a Cure,” a fundraising event for breast cancer research that ran between 6 and 11 a.m.

“He went out at 5. We were happy to do it, ‘Canter for a Cure’ is such a good cause,” said Rontos Racing’s Ron Sanchez. “He was full of energy. He really likes the track. He galloped a mile and a half and came back with good energy. He was full of himself. He’s settled in at Pimlico really nice.”

Sanchez reported that Social Inclusion, who finished third in the Wood Memorial (G3) after winning his first two races impressively at Gulfstream Park, is scheduled to gallop again on Sunday at 8:30 a.m. and breeze on Monday.

Jockey Luis Contreras, who has retained the mount aboard the Manny Azpurua-trained colt, is scheduled to be at Pimlico for Social Inclusion’s breeze Monday.

Kentucky Derby (G1) winner California Chrome made an earlier-than-usual appearance on the track at Churchill Downs Saturday for his morning exercise: a gallop of 1¾ miles under exercise rider Willie Delgado.

“I wanted to go out before the track got chewed up,” assistant trainer Alan Sherman said of California Chrome, who hit the track at 6:30, about 20 minutes earlier than his norm. “He has been on a ‘wet-fast’ track before, but I don’t know if he has been on a sealed track.”

The track had been sealed Friday evening after the 10-race program.

California Chrome backtracked to the eighth-pole in a light rain, but by the time he had finished, the rain had increased in intensity.

“We probably haven’t had this much rain (in California) all year,” said Sherman, son of trainer Art Sherman. “I know we sure could use it.”

California Chrome is scheduled to leave for Baltimore on Monday.

“We are supposed to load at the barn at 10 o’clock Monday morning and the plane leaves Lexington at 12:30,” Sherman said. “He will train that morning and then go.” 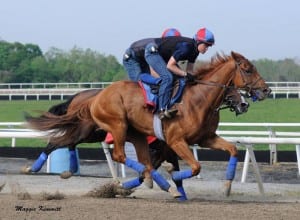 Maryland-based jockey Julian Pimentel will ride Kid Cruz in the Preakness Stakes for trainer Linda Rice. It will be Pimentel’s second start in Maryland’s signature race; he was up on Norman Asbjornson, who was 11th in 2011.

“It’s very exciting to be in those kind of races,” Pimentel said, “I’m really looking forward to it. It was a great experience back then. I’m pretty sure this is going to be the same.”

Pimentel, 33, rode Kid Cruz to off-the-pace victories in the Private Terms on March 8 at Laurel and the Federico Tesio on April 19 at Pimlico.

“He’s a really nice horse,” Pimentel said. “I’ve ridden him twice and he’s won both times. He did it going away pretty good. We’ve got a race on the racetrack, which should help. It’s a tough race, but he’s tough.”

Kid Cruz is scheduled to train at Belmont Park on Monday morning and ship to Pimlico later in the day.

John Oxley’s Illinois Derby (G3) winner Dynamic Impact was scheduled for a workout Saturday morning in preparation for next Saturday’s Preakness, but weather forced assistant trainer Norman Casse to call an audible and scrub the work.

Before the track opened at 6 o’clock, Casse stood in a light rain as tractors floated the track.

“I am afraid this will be the last day we will be able to work,” said Casse, son of trainer Mark Casse. “There is more rain coming and who’s to say it won’t be worse later today or tomorrow?”

In the end, Casse decided to wait a day and instead have Dynamic Impact gallop 1½ miles under exercise rider Marco Cano at 6:30.

“A lot of my horses didn’t go out and I am happy he at least got to gallop,” Casse said. “We are prepared to go tomorrow and if not, it is not a big deal and we can go Monday.”

Christopher Dunn and Loooch Racing Stable’s Ria Antonia, sixth in the Kentucky Oaks (G1) in her most recent start, visited the starting gate and then galloped 1½ miles under Maurice Sanchez.

“She had blinkers on in the Oaks and we are going to change equipment for her next race; whatever that will be,” trainer Tom Amoss said. “She stood in the gate with blinkers off, which is required for an equipment change.  We are still up in the air about the Preakness. She will work Sunday or Monday, depending on the weather.”

With trainer Billy Gowan looking on from the six-furlong gap, Ride On Curlin picked up the pace his second time around the track.

“I loved the way he trained this morning; he was very strong,” Gowan said.

Beccia, who has been the colt’s regular exercise rider since the first of January, was similarly enthused.

“That second mile was the most aggressive he has been with me all year,” Beccia said. “(The Derby) didn’t take anything out of him. I think he is better now than he was going in.”

Ride On Curlin will return to easy mile gallops the next two mornings before leaving for Pimlico Monday.

General a Rod will run in the colors of Skychai Racing in the Preakness. Starlight Racing and Skychai Racing purchased the colt from its original owner J. Armando Rodriquez a few days before the Kentucky Derby.