For Rosie Napravnik, a homecoming, minus a familiar face 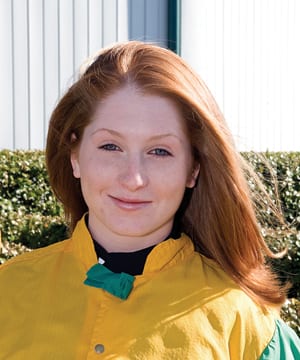 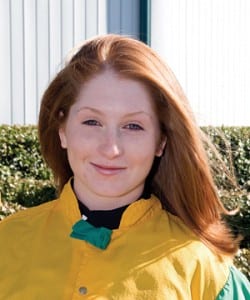 When Rosie Napravnik ventures to Pimlico Race Course to ride Bayern in next Saturday’s 139th running of the Preakness Stakes (G1), the 26-year-old riding star can expect an emotional homecoming.

A familiar face will not be there to greet her. Trainer Dickie Small, who gave her a leg up on her very first winner, passed away on April 4.

“There’ll be a void at Pimlico,” said Napravnik, who guided the Small-trained Ringofdiamonds to victory at Pimlico in her first career ride on June 9, 2005. “When I ride in big races and do well, he’s one of the first people I think of.  I know how proud of me he would be.”

Small’s presence will be missed next weekend, but Napravnik can expect a lot of support from family and friends at Pimlico as she attempts to realize a schoolgirl’s dream of someday winning the Preakness Stakes, as well as the Kentucky Derby.

“It would be just as special. It’s a Triple Crown race. It’s my home track with all my friends and family around. We’d have half the grandstand cheering for us – that’s what would make it special,” said Napravnik, who began galloping horses for Small and trainer Holly Robinson at Pimlico while attending Hereford High School in Baltimore County.

“I would feel like – if I was able to ride the winner of the Preakness – that I was doing it for everybody who got me started in Maryland and who gave me the opportunities that led to Fair Grounds, Kentucky and Saratoga and having a horse in the Preakness.”

Napravnik, who finished third aboard Mylute in last year’s Preakness Stakes, expressed a lot of confidence in the abilities of Bayern, despite his disqualification from first to second in the Derby Trial at Churchill Downs on April 26.

“Coming out of the 1 hole, we had to play a forced hand and go to the lead and it was deeper on the inside of the track. He still ran a good race. He was a game horse,” Napravnik said. “The DQ, I don’t have much to say about that. He won the race and had to be very gritty to do it.”

Napravnik’s confidence in Bayern soared during a subsequent five-furlong workout in 58 1/5 seconds at Churchill on May 5.

“His work was absolutely incredible. He really impresses me in the morning. I was super-excited about him for the Derby Trial and if we’re able to have a little more options in positioning, I think he’ll be better around two turns than the one-turn mile,” she said of Bayern, who galloped 1 ½ miles at Churchill Saturday morning and is scheduled to ship to Pimlico on Wednesday.

Napravnik has become a key player on the national racing stage in recent years, having dominated the Fair Grounds jockey standings three straight years and riding many Grade 1 winners, including Untapable in the Kentucky Oaks (G1) at Churchill on May 2. Yet, the excitement of riding in major stakes such as the Preakness Stakes hasn’t waned.

“I don’t think the big races will ever be old hat. Certainly, I don’t think the Triple Crown becomes old hat for anybody,” she said. “With the experience of riding in these races more and more often, I’m not overwhelmed by it and can be more prepared each time and know more what to expect.”

When she arrives at Pimlico next weekend for yet another big race, she’ll pause to reflect back on the day Dickie Small gave her a leg up on her first mount.

“I didn’t know if I’d be terrible or successful or somewhere in between,” she said, “but it’s really been the ride of my life.”