Preakness notes for May 11: ‘Chrome’ a ‘rock star’ 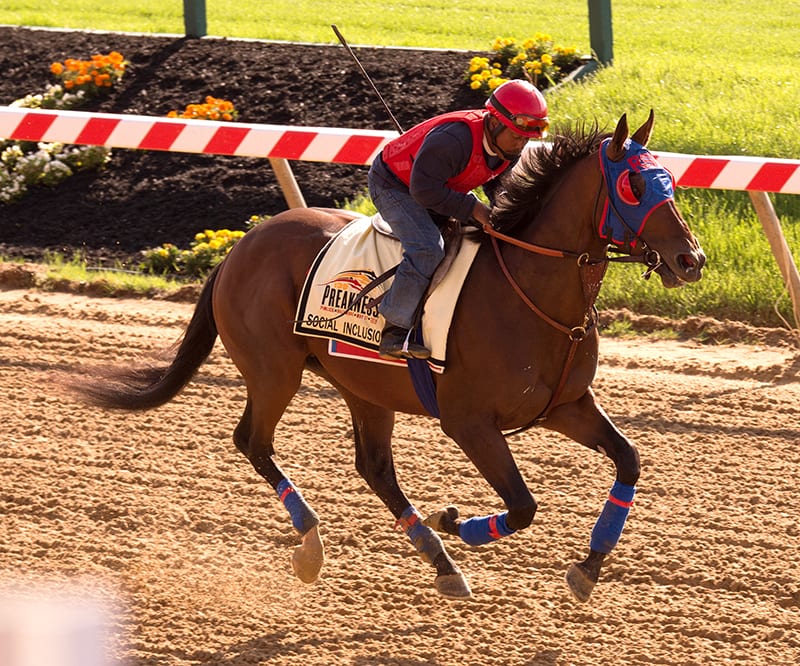 “He loves it out there,” exercise rider Willie Delgado said. “Whatever he does, I just let him do. He is a rock star and I am just a groupie. He is the Kentucky Derby winner; he can do whatever he wants.”

What California Chrome wanted to do in the first part of the activity was pick up the pace when a trio of horses galloped past.

“That’s just him,” said Delgado, who rode and trained in Maryland before venturing to the West Coast last fall. “He is so competitive that he wants to go.”

“I think he’ll love Pimlico,” Delgado said. “It is a lot like Los Alamitos with sharp turns and a long stretch.”

As far as any letdown from the Derby victory is concerned, Delgado doesn’t see it.

“I am amazed at how quick he bounced back from the race,” Delgado said. “I have never been around one that bounced back that quickly. He goes out and does a mile and three-quarters like it’s nothing.”

Alan Sherman, assistant to his father Art Sherman, said California Chrome would go to the track at 6 Monday morning to jog or gallop before making the journey to Baltimore.

The son of Offlee Wild has pressed the pace in all four of his career starts. He broke his maiden on Jan. 4 wearing blinkers but didn’t have them on for an allowance victory by 15 lengths on Feb. 13 or his third-place finish in the Arkansas Derby (G1) on April 12. The blinkers were back on for the Derby Trial (G3) on April 26, when he finished first but was disqualified and placed second.

There appears to be plenty of speed in the Preakness: Kentucky Derby winner California Chrome, Pablo Del Monte, Ring Weekend, Social Inclusion and Dynamic Impact have all been prominently placed in their recent races. After the Derby Trial DQ, Baffert said that the colt had to be able to stalk the pace, hence the decision to make the equipment change.

”If we’re going to get him to track horses, track the speed, he needs them off,” Baffert said Sunday.

Bayern, purchased by Kaleem Shah at a 2-year-old in training sale for $320,000 last year, galloped 1 ½ miles after the morning renovation break at Churchill Downs with exercise rider Jorge Alvarez aboard. The Baffert trainee, who later schooled in the paddock with the horses in Churchill’s first race, is scheduled to have his final work for the Preakness Monday morning and ship to Baltimore on Wednesday.

Dynamic Impact started a couple lengths behind his workmate and finished even at the wire with fractions of :13, :37.3/5 and a six-furlong gallop out time of 1:15 2/5. The move was the 18th fastest of 41 for five furlongs.

“I am glad we got the work in,” said Norman Casse, assistant trainer to father Mark Casse, of the move that had been postponed a day. “He started off a little slow, but finished strong and moved well over the track.”

Dynamic Impact had worked five furlongs in company in 1:00 1/5 on May 3 in his first breeze since winning the Illinois Derby on April 19.

Dynamic Impact is scheduled to fly to Baltimore on Wednesday and Mena, who will be riding in his first Preakness, is headed to Pimlico on Friday to ride Tepin for Casse in the $100,000 Miss Preakness Stakes at six furlongs. Mena has ridden Tepin in all four of her starts, including a victory in her most recent outing in the Delta Downs Princess (G3) in November.

“I’ve been a fan of the horse since I saw him run on Jan. 1 at Gulfstream (a head victory in the Gulfstream Park Derby),” said Starlight managing partner Jack Wolf, whose group joined Skychai in purchasing the colt from J. Armando Rodriguez days before his troubled 11th-place finish in the Kentucky Derby. “We didn’t see the real General a Rod that day. I think he’s got a lot of good races in front of him.”

Trained by Mike Maker, General a Rod had never finished out of the money in five starts before encountering traffic in the Derby under jockey Joel Rosario. Eclipse Award-winning jockey Javier Castellano has been named to ride him in the Preakness with Rosario having already committed to Ride On Curlin.

“Javier gave the horse a very good ride in the Fountain of Youth,” Wolf said. “I think it was an easy choice for Mike when he came open. I think he’ll do a good job for us and the horse.”

General a Rod, a $72,000 yearling purchase, has already earned $282,000 and is set to be Maker’s first Preakness starter. He was third in the Florida Derby (G1), losing by only 1 ½ lengths to well regarded Constitution in his final Derby prep.

KID CRUZ – The two-time Maryland stakes winner galloped 1 ½ miles and did some gate schooling at Belmont Park Sunday morning, Trainer Linda Rice, who is slated to saddle her first Preakness starter Saturday, reported that the son of Lemon Drop Kid was scheduled to school in the paddock before the fourth race on Sunday.

“He’s sharp and he’s ready for a race,” said Rice, who plans to van the Federico Tesio and Private Terms winner to Pimlico after training at Belmont on Monday.  “It’s a very prestigious race, and it’s very exciting to have a horse go to the Preakness that deserves mention. Frankly, I’m really not interested in going to a race unless I think we have a legitimate chance.”

Kid Cruz took an unlikely and circuitous route to the Preakness, having originally been purchased by Black Swan Stable for $80,000 at the 2012 Keeneland September Sale and sent to trainer by Bill Mott. After a dismal outing in his debut on grass, he was claimed out of a maiden victory at Aqueduct for $50,000 by Vina Del Mar Thoroughbreds with Black Swan later buying back  a share of the colt.

He has since won two of three starts on dirt for Rice, including the ungraded stakes at Laurel and Pimlico. The Preakness will be the first graded-stakes start for the confirmed late runner.

“We were not able to consider the Kentucky Derby because he didn’t have any points to get into it,” Rice said. “I had entered in the Wood Memorial (Aqueduct) with hopes of running, but we weren’t able to run that day. We ran him in the Tesio (Pimlico) instead in hopes of making the Preakness. It’s going to be a big step up in competition from his two previous wins, but at this point I’m excited about giving it a try.”

The Giant’s Causeway colt, bred by Ward and co-owned with Mrs. John Magnier, Derrick Smith and Michael Tabor, worked six furlongs in company in 1:12 1/5 Saturday morning. He will ship from Lexington, Ky. to Baltimore on a charter flight Monday.

Ward joked that Pablo Del Monte was doing so well Sunday that he had to bring in reinforcements to help out because the colt had so much energy.

Assistant trainer Blake Heap will handle the horse at Pimlico until Ward arrives later in the week.

RIA ANTONIA – Christopher Dunn and Loooch Racing Stable’s Ria Antonia worked a half-mile on her own in 47 3/5 seconds over a track labeled as “good” early Sunday morning at Churchill Downs.

With Calvin Borel up for trainer Tom Amoss, Ria Antonia covered the first quarter-mile in :24 1/5 and galloped out five furlongs in 1:00. The move was the fourth fastest of 52 at the distance for the morning.

“Everything has been extremely positive with her and whatever the plan is, we are excited about her,” said Amoss of Ria Antonia, who was transferred into his barn last Monday following a sixth-place finish in the Kentucky Oaks (G1).  “All of her preparation with me has been very good.”

Amoss said a decision regarding the Preakness would come Monday.

“I am going to talk with Ron (Paolucci of Loooch Racing) this morning and then again Monday morning after she’s had a day,” Amoss said. “I am sure a decision will be made tomorrow.”

RIDE ON CURLIN – Daniel Dougherty’s Ride On Curlin galloped an easy 1 1/8 miles after the morning renovation break at Churchill Downs with exercise rider Bryan Beccia up.

Trainer Billy Gowan said Ride On Curlin would go to the track at 6 o’clock Monday morning to train before being prepared for a 10 a.m. departure by van to Lexington to join California Chrome on a flight bringing him to Pimlico.

Beccia’s departure will be quicker.

“As soon as I jump off him, I’m jumping in my car and heading to Baltimore,” Beccia said.

“He went out for a jog this morning and everything went well,” Motion said. “He jogged about a half-mile here behind my barn.”

“He looks good,” said trainer Manny Azpurua as the 3-year-old son of Pioneerof the Nile walked off the track under exercise rider Domingo Navarro. “He’s ready for tomorrow.”

Social Inclusion is scheduled to breeze at 8:30 a.m. Monday.

“How far, it all depends. But right now, I think he’ll go a half mile,” the 85-year-old South Florida-based trainer said.

Jockey Luis Contreras is scheduled to travel from Woodbine to Pimlico for Monday’s breeze.

Social Inclusion is slated to make his fourth lifetime start in the Preakness. The Kentucky-bred colt kicked off his career with a pair of easy victories at Gulfstream, including a track-record breaking allowance score at 1 1/16 miles in his second start before finishing third in the Wood Memorial (G1).