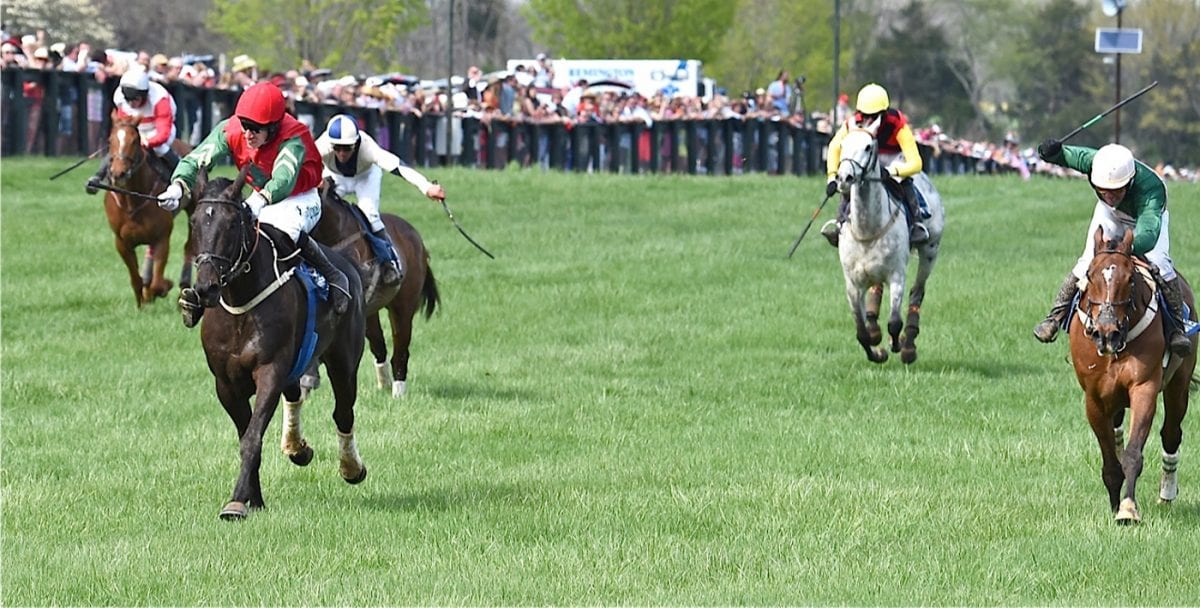 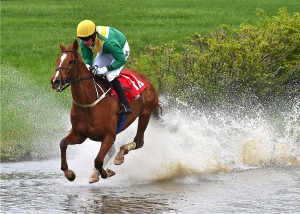 Dr. Alfred Griffin, Director of Racing for the Virginia Gold Cup, estimates that approximately 75,000 racegoers attended the event, backing up traffic on Route 17 and Interstate 66 until 3:00pm as tailgaters maneuvered into Great Meadow.  With wagering available through pari-mutuel windows and mobile technology, many could actively back their favorites in the six carded races.

That the Gold Cup is held on the same day as another important racing event, the Kentucky Derby, is not lost on Gold Cup organizers.

Perhaps as many as 30,000 stayed around for the Kentucky Derby, which was shown on the two big screen televisions and many other monitors broadcasting in the numerous tents around the steeplechase course.  Next year, racegoers will be able to have more than a simple rooting interest in the Run for the Roses; legislation approved by Virginia’s General Assembly will allow wagering on the Kentucky Derby itself at Great Meadow.  The legislation goes into effect this summer on July 1.

“The encouraging thing here is that this is another dimension for racing in Virginia,” commented Griffin.  “It’s not to take the place of Colonial Downs, but we have all of these good sanctioned races and gradually under our umbrella we could expand it to other sanctioned events in Virginia.”

Virginia Racing Commission Fiscal Officer Dave Lermond confirmed the handle at the Gold Cup was $135,811, up 68% for the six races up from $81,017 during over the same event last year.  Last year’s fall event, the International Gold Cup which typically draws one-third of the spring crowd, pumped $38,939 through the window.

In Virginia, the takeout — the amount removed from the mutuel pool for purses, the racetrack operator, the breeders fund, and taxes — ranges from 18 percent on win-place-show wagers to 22 percent on exotic wagers.  Under its agreement with the Virginia Horsemen’s Benevolent and Protective Association, the Gold Cup can keep both the racetrack operator share and the purse account share of the takeout from wagering on Gold Cup races.  That means the organization retains 15.5 percent of win-place-show money wagered and 18.33 percent of exotics — a total of approximately $22,000 based on Saturday’s wagering.

Virginia has a long history of steeplechase racing, and spring crowds at steeplechase events, which mostly take place in rural estate settings, commonly number in the tens of thousands.  Yet, historically, these races have not permitted parimutuel wagering; the only way race watchers could participate has been by the means of unofficial “tailgate pools” such as writing your name in a program beside a horse.   Griffin sees parimutuel wagering as contributing to purse dollars.

“I see this thing as a positive thing for Virginia horsemen.  The way we get money back to the horsemen is through purses.  Sometimes I think that is lost in the translation of what people are doing or thinking.”