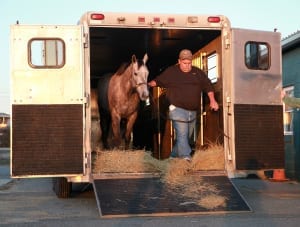 Virginia-bred Trish’s Wish, trained by Henry Carroll, was one of the first horses to enter the Monmouth Park stable area, led by David Lewis. hoto By Bill Denver/EQUI-PHOTO

It was, as George Harrison suggested, “a long, cold, lonely winter” in the mid-Atlantic region.

So when Monmouth Park opened its doors last week and welcomed horses back into the New Jersey racing facility, trainer Chuck Spina was more than overjoyed.

Monmouth Beach resident Spina is not the only New Jersey-based trainer happy to be back at Monmouth Park in preparation for the Sunday, May 10 opener.

Gregory Sacco is part of perhaps the oldest family of New Jersey Thoroughbred trainers. His father, William J. Sacco, was Monmouth Park’s leading trainer back in 1962. His uncles Vincent and Salvatore were also trainers, and uncle Johnny was a jockey and trainer for W.J. Sacco during his tenure.

“When I walk into Monmouth Park, I always think of my Dad and two uncles,” Gregg Sacco said. “My brother and I would spend our summers in Dad’s barn, working with the horses. That’s how I got hooked. Monmouth Park is a special place for me. It’s like going home.”

Patrick McBurney is another New Jersey-based trainer who brought his stable of horses home to Monmouth last week.

“I was in Florida, but I was still driving to get home to New Jersey,” said McBurney, a resident of Fair Haven. “I got in Monday and the track opened Wednesday.  I had to be here.  No place is prettier.  Monmouth Park continues to be one of the best tracks in the country.”

Sacco will have a full barn of 52 horses to train at Monmouth Park. His so-called “star of the barn” will be Charleymillionaire, who is prepping for the $250,000 Grade III Pegasus Stakes, a mile and a 16th race for 3-year-olds, in June.

The speedy New Jersey-bred son of Sky Mesa is a homebred for Red Oak Stable.  He sports three wins from eight starts and placed in the Jersey Juvenile and Jimmy Winkfield Stakes.  Most recently, he was fifth, but beaten less than two lengths, in the Grade 3 Bay Shore at Aqueduct.

“We have a lot of horses rested from last year,” Sacco said. “We have some nice allowance horses. We trained all winter in Ocala, Florida and we’ll now see what happens. With a little bit of racing luck, we should be very competitive at Monmouth this year. We have others that are right on the cusp of being big winners.”

Although Sacco used to travel to Florida during the winter months, he said he remained close to his Ocean Township home to be with his kids, who are approaching their teenaged years.

“It was a brutal winter,” Sacco said. “But we had a very good winter at Philly (Parx Racing).”

McBurney already has 17 horses housed at Monmouth Park and will have approximately 30 horses in the barn when the 2-year-olds are ready to run.

McBurney was in Florida for most of the winter.

“It was only our second season going to Florida,” McBurney said. “Luckily we did go, because we wouldn’t have been able to get any training done here. It was a lucky year to be in Florida.”

Just Call Kenny, a three year-old, Virginia-bred son of Jump Start that he trains for ABL Stable, et. al., scored a flashy, 19-1 upset of the Spectacular Bid Stakes at Gulfstream in January.

Just Call Kenny suffered a condylar fracture in that race, but surgery and recovery have thus far gone smoothly.

McBurney has brought Just Call Kenny to Monmouth, where he won his debut last August.  He has a 3-2-1-0 ledger and earnings of more than $90,000.

Another McBurney-trained horse for the course is Lucky Rag Doll, a 4-year-old filly who won back-to-back races at Monmouth last July before running third in the Grade 3 Monmouth Oaks.

Speaking of horses for courses, Spina will house 16 horses at Monmouth Park, including Monmouth ace Winiliscious.

“We have a lot of nice babies and I’m looking forward to working with them,” said Spina, who said that 12 of his horses spent the winter months at Jim Crupi’s New Castle Farm in Ocala.

Perhaps Spina’s best horse is 5-year-old filly Winiliscious, who was second in the Monmouth Beach Stakes here last May.

“She’s run in a lot of nice races here,” Spina said of Winiliscious, who, though winless at home last year, won five races at Monmouth Park in 2012. “I claimed her for $7,500 and she’s won a couple hundred thousand.”

Spina said that he’s prepping Winiliscious to run once again in the Monmouth Beach Stakes on May 25, but he would like to get her a race before that date.

After this year, Spina said that the plans are to breed Winiliscious to former Kentucky Derby contender Uncle Mo.

New Jersey-bred City’s Fast Lane, a 4-year-old, and Captain Derek, a 4-year-old named after New York Yankees All-Star Derek Jeter, will also race at Monmouth Park this meet for Spina, who has an ownership stake in both.

“It’s the place that I want to be,” Spina said of Monmouth Park. “I’ve been coming here forever.  This is my life.”

McBurney said that the dirt track at Monmouth Park was “picture perfect” after a bizarre mid-April snowstorm blanketed the area.

“It was a rude awakening for our staff,” McBurney said. “We left Florida and it was 80 degrees, and we come here and it’s 32 and snowing. I was scraping ice off my windshield. Our horses came from Florida and ran first rate. I’m keeping my fingers crossed for a great meet.”

He added, “Plus, it’s always exciting when the 2-year-olds come out.”

The Monmouth Park meet begins May 10 and will be highlighted by the Grade I William Hill Haskell Invitational, with a $1 million purse, on Sunday, July 27.