Safely Kept, the Maryland-bred filly who was the Eclipse champion sprinter in 1989 and won the 1990 Breeders’ Cup Sprint, was euthanized yesterday because of the infirmities of old age.  She was 28 and had been living 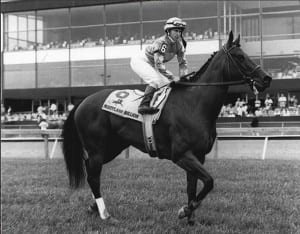 at Burleson Farms in Kentucky.

Bred by David and JoAnn Hayden, she was a daughter of Horatius out of the Winning Hit mare Safely Home, a hard-knocking claimer who won 16 of 73 starts.  Safely Kept earned a spot in the National Racing Hall of Fame in 2011 and was a member of the inaugural class of the Maryland Thoroughbred Hall of Fame, in 2013.

Born in 1986, Safely Kept won 24 of 31 career starts and earned more than $2 million.  She won 22 stakes in her career.  Those included, in addition to her Breeders’ Cup victory, the Grade 1 Test at Saratoga and a quartet of Grade 2 events.

She also finished second in the 1989 Breeders’ Cup Sprint, losing by a nose to the late-running Dancing Spree.

Safely Kept began her career running in the colors of the Haydens’ Dark Hollow Farm, winning two Pimlico stakes as a two year-old.  “Offers poured in,” according to the Maryland Thoroughbred Hall of Fame site (here), “and the couple sold their star filly for $300,000 to a partnership headed by Barry Weisbord, under whose colors she would compete for the rest of her marvelous career.”

As a broodmare, Safely Kept was the dam of stakes winners Contrast and Peace Chant.