In the Mister Diz, eight year-old star Ben’s Cat made his 2014 debut a winning one, cruising to a nearly two-length win for breeder/owner/trainer King Leatherbury.  It was the 25th win of his remarkable career and pushed his earnings past $1.9 million.  What’s more, it was his fifth consecutive win in the Mister Diz, a turf sprint for Maryland-breds.  “Here’s the thing,” said Leatherbury afterwards.  “Five years from any one year, there’s not a lot of horses even running, much less of stakes caliber.”  (More on the Mister Diz here and here.)

The Twixt, a 1 1/16 mile main track race for three year-old Maryland-bred fillies, saw the only true outsider in the field of five get the money.  Ten-race maiden Aunt Ellen was 18-1 — no other horse went off longer than 7-1 — and for most of the race seemed distinctly outclassed, dawdling well behind the field in last.  But in the last eighth, the others, who’d been sparring for the lead, began to run out of steam, while Aunt Ellen finally found her best stride.  She nipped favored Steady N Love by a head.  “In midstretch I saw that all of them were struggling a little bit,” explained Ferris Allen, who trains Aunt Ellen for her breeder, Hickory Ridge Farm, “and I said – where’s [Aunt Ellen]?  And she was blasting down the middle of the track.”  (More on the Twixt here.) 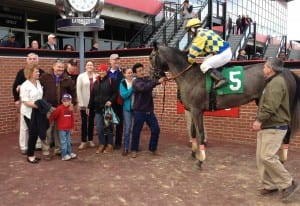 You’ll be forgiven if you thought the Dahlia Stakes was a replay of last year.  For the second straight year, trainer Susan Cooney’s homebred Embarr got the money, this time holding off ultra-game longshot C C Gold in the one-mile turf test for older fillies and mares.  It was her first start of the year, just as it had been a year ago.  “She comes to the races fresh this time of year,” explained Cooney.  On the docket for her may be a return engagement at Pimlico, in the Grade 3 Gallorette on Preakness weekend.  (More on the Dahlia here.)

It was a rough weekend for horses in the top Midlantic-bred poll.  Though none of the top older horses ran, four of the top five three year-olds did:

The good news is that two horses who figure to get plenty of consideration in the older horse category — Ben’s Cat and Princess of Sylmar — made triumphant 2014 returns to the track.