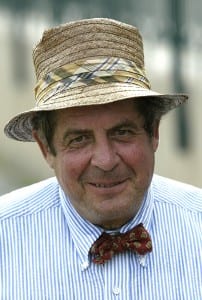 A consummate horseman.  A man’s man.  A guy who knew every situation.

As they come to terms with the passing of legendary trainer Richard (Dickie) Small, those are some of the words that Marylanders in the racing game use to describe the only man to condition two members of the Maryland Thoroughbred Hall of Fame.

Small, who won nearly 1,200 races in his career – 1,199 to be exact – saddled Broad Brush, Caesar’s Wish and Concern to win numerous Grade 1 stakes, and he was hardly reluctant to send those horses anywhere in the country to compete.

Yet those who knew him have greater, fonder memories that extend well beyond the race track.

“Over the last 40-45 years, I probably spoke with Dickie four or five times every week,” said breeder and veterinarian Tom Bowman, of Dance Forth Farm in Chestertown. “And most of the time the conversations didn’t revolve around the horses. We talked about our families and politics and economics and any number of things, and eventually the topic would get to horses. But Dickie was very smart and he was very complex. He loved the horses, but that was only part of who he really was.”

Bowman noted that Small, who served two tours of duty in the Vietnam War as a member of the Green Berets, was an avid military historian. Whenever he had the chance, Small would visit military musuems and former battle sites.

Yet Small was also very compassionate when it came to helping people on the backstretch stay clear of trouble.

“You know, Dickie was not a softy, but he would go out of his way to help people, especially young people,” Bowman said. “He had my daughter, Becky, work for him one summer and my son, Brook, went to work for him and learned the ropes. He didn’t cut him any breaks, either. Dickie loved helping out kids on the backstretch. He really wanted to make sure they steered clear of trouble. He really liked helping the young, female riders get started.” 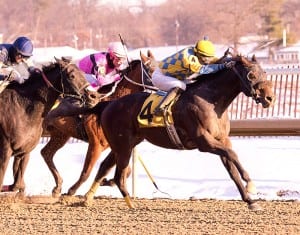 Small has long had a reputation for helping women riders become successful on the Maryland circuit, including Rosie Napravnik, Andrea Seefeldt, and Forest Boyce.

Another young woman, Dylan Smith, has galloped horses for Small for the last eight years while also working as an assistant trainer. On Sunday afternoon at Pimlico, Smith saddled Wise Minister, a former Small trainee, to a second-place finish – he was promoted from third to second when winner Ghareeb was disqualified and placed last – in the featured allowance race, her first as the program trainer.

“I started galloping for him when I was 17,” said Smith, 25, in a series of text messages on Sunday evening, admitting she was too emotionally drained to endure a phone interview. “He taught me things about the horses that I could not have learned anywhere else. He truly was one of a kind. The first horse I galloped for him was Something Indian. He told me not to fall off.”

Smith galloped many horses for Small, including multiple stakes winner Broad Rule, and often she was befuddled by his instructions. But they always proved to be the right ones.

“Dickie always told me the trick is to get the horse to do something, not to make the horse do something,” Smith explained.  “That’s always stuck with me. Sometimes when I would get on a horse he would tell me something that didn’t make sense. But he knew what he was doing. He understood the horses better than anyone could ever know.”

Longtime Bowie trainers Eddie and Linda Gaudet have known Small for decades.  They remembered him, as many others would, for his character more than his horsemanship.

“Dickie was always the consummate horseman, a true gentleman and a real man’s man,” Linda said. “He was all-Marine and all-Green Beret. He was such a big, strong man. It’s a shame to see how the cancer was able to finally take him. He loved the horses and he really had tremendous respect and passion for the horses. Unfortunately, trainers like him are dying off.”

Longtime Maryland trainer King T. Leatherbury, who recently turned 81 and on Saturday watched his barn’s star, Ben’s Cat, kick off his eight-year-old campaign with his fifth straight score in the Mister Diz Stakes on the turf at Pimlico, had the utmost respect for Small.

“We didn’t run a lot of horses against each other, but I know Dickie was a true gentleman and a true horseman,” Leatherbury said. “One time at Pimlico we were saddling horses in the indoor paddock and his horse reared up and caught him in the head. He was bleeding pretty good and I asked him if he was okay, but Dickie walked that horse all the way over to the starting gate for a six-furlong race. I know if a horse kicked me in the head, I would have gone straight to the hospital.” 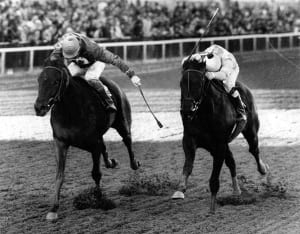 Small graduated from Gilman School in Baltimore and later played lacrosse at the University of Delaware. He learned a lot in his early days about being a horseman working closely with his father, Doug Small, a longtime trainer on the circuit. His two most accomplished trainees, Broad Brush and Concern, a son of Broad Brush, have already been inducted into the Maryland Thoroughbred Hall of Fame.  Broad Brush was a member of the inaugural class of 12 inductees in 2013, while Concern was one of only two inductees in 2014.

Broad Brush was one of the sport’s genuine stars in the late 1980’s and garnered an Eclipse Award as champion older male. Concern was a very good three-year-old, but his exploits were overlooked until he rallied to win the Breeders’ Cup Classic at Churchill Downs in 1994. It was a moment that Bowman would not forget, but for a different reason.

“Dickie rarely talked too highly of his own horses,” Bowman said. “If he said he liked his horse in a race, that was as much as you would get out of him. But before the Breeders Cup Classic that year, Dickie called me and said he wanted me to come to Kentucky for the race. He told me, ‘I think I’m going to win it.’ So, I went there with my son, Brook, who was only 12 at the time. Right after Concern won the race, Brook went running to the winner’s circle. While Dickie was being interviewed by NBC, he handed the reins to my son and told him to walk him back to the barn. I couldn’t believe it, but Dickie said, ‘That horse just won the biggest race in the world, he’s too tired to do any more running.’

“That was Dickie. He always knew every situation.”