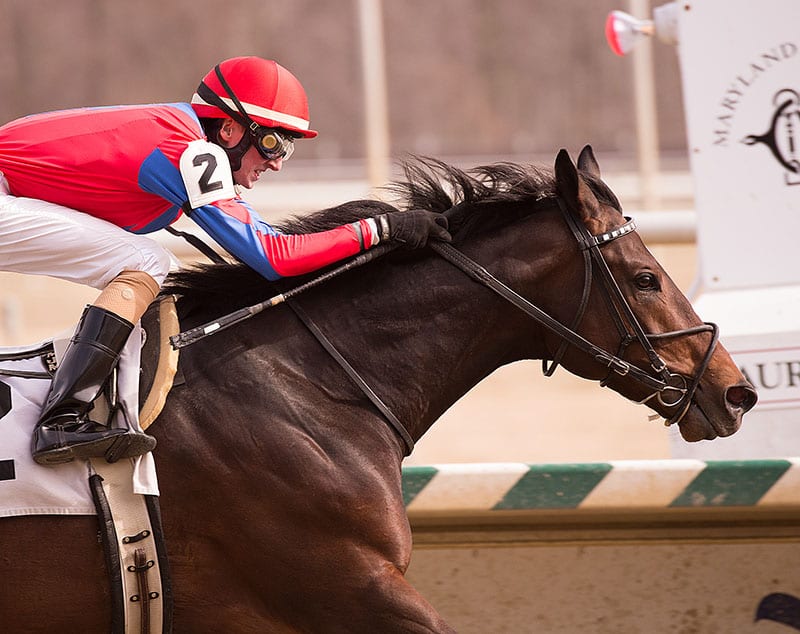 Ground Transport and Mr Palmer ran 1-2 all the way around and that’s how they finished in the $100,000 Harrison E. Johnson Memorial Handicap for three-year-olds and up at Laurel Park Saturday afternoon.

West Point Thoroughbreds, St. Elias Stable & Get Grounded Stable own Ground Transport, who shipped from Fair Grounds to win the mile and one eighth test, his first stakes victory.

At the finish, Trevor McCarthy and the son of Big Brown were 3-1/4 lengths ahead of Mr Palmer. It was another 3-1/2 lengths back to Swift Warrior, who bettered Behemoth by a half-length.

“The plan was for us to go for the lead and control the pace and we were able to slow the pace down,” McCarthy said. “That gave us lots of horse for the lane and it worked out very well. He can be a tricky horse to ride and has to have his way. Today he got it. Once we got to the three-eighths pole we were confident but when we got to the 1/8th pole I thought I was the winner.”

Ground Transport covered the distance in 1:52.17 and paid $8.60. Michael Stidham trains the winner. He is now two-of-four this year, including a fourth place finish in the Mineshaft Stakes (G3) at Fair Grounds last month.

“I told Trevor if they give us an easy lead we’d be there. If not, rate him and just ride it as it comes up,” said assistant trainer Chris Davis. “We brought him in here Thursday morning and trained him yesterday. Obviously he likes it here, just a consummate professional. The trainer and I are on the same page. He’s one of those trainers who doesn’t give you a lot of instructions because too much can get a horse beat. Trevor rode him perfectly. Got him settled, relaxed him and took him home.”

McCarthy is in position to capture his first riding title with a commanding lead in the jockey standings. The 19-year-old apprentice has ridden 51 winners, 16 more than Victor Carrasco.