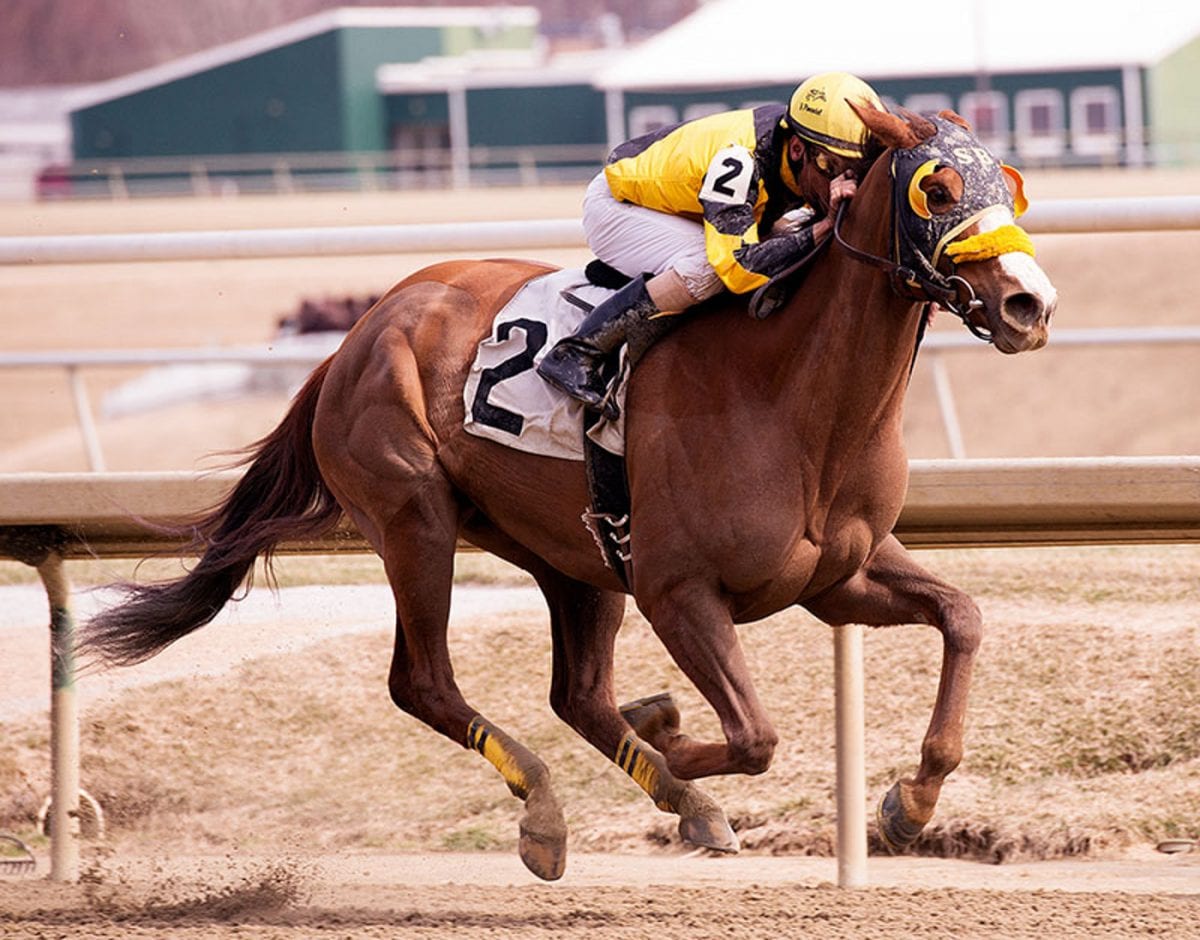 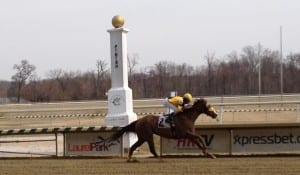 More Than a Cruise takes the Conniver. Photo by The Racing Biz.

Larry Murray’s tie had a lot going on: leprechauns and pots of gold, frosty mugs of beer and shamrocks.

So he dusted it off for More Than a Cruise’s race, in Saturday’s Conniver Stakes for Maryland-bred fillies and mares at Laurel Park.  That he got to flash it in the winner’s circle was a bonus, and one that, if not entirely unexpected, wasn’t exactly expected, either.

At 9-5, the daughter of More Than Ready out of the stakes-winning Not for Love mare River Cruise, was the second choice in the field of five.  Sagamore Racing’s Tell a Great Story, running for the first time since a third place finish in the Grade 2 Delaware Oaks last July, was the bettors’ choice to win the race but finished last.

More to the point, More Than a Cruise had just three wins to her credit in 19 starts.  Eleven other times she’d come in second or third.  “A tremendous number of seconds and thirds,” Murray said.  There was every reason to see her in the triple or the exacta; the win slot was less certain.

Still, a couple of factors argued in her favor.  One was the absence of Bold Affair, the race’s two-time defending champ who was retired last April.  “I wasn’t sorry to see her go,” Murray said with a laugh.  “With no Bold Affair in this one, I thought we had a pretty good shot.”

The seven furlong distance of the race was another; in a race full of horses that wanted a little more — or a little less — ground, the distance hit the Sondra and Howard Bender homebred right between the eyes.

“I gave her the summer off last year just to target these races going seven-eighths here in the fall and winter,” Murray said.  More Than a Cruise won a second-level allowance going seven furlongs on New Year’s eve.  That gave her a record of 3-1-2-0 in races at the distance.

And then there was the paddock scene.  Several of her rivals were noticeably worked up prior to the race, while More Than a Cruise was practically serene.

That was, to some extent, how the race played out.  Brenda’s Way set a fast early pace — 23 for the opening quarter, 46 3/5 for the half — but couldn’t sustain it.  Tell a Great Story, close up for the half, dropped out thereafter.

“They were going pretty quick up front and she was nice and relaxed in the back,” said jockey Julian Pimentel.  When he steered her outside and gave her her cue nearing the lane, she shot past the field easily and was never challenged late.

The victory was More Than a Cruise’s first stakes triumph after a pair of earlier stakes placings, one in this race a year ago. 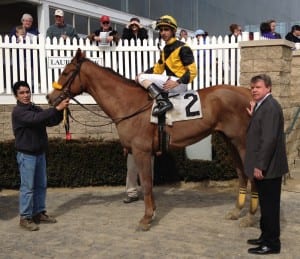 Trainer Larry Murray, right, with More Than a Cruise in the winner’s circle after Saturday’s Conniver. Photo by The Racing Biz.

Her longer term future is clear; this will probably be her last year on the track, Murray said, and then off to the breeding shed.

Oddly enough, it’s her immediate future that’s murky.  Seven-furlong races can be hard to come by — Pimlico, Delaware, and Monmouth don’t card them at all, for example — which leaves her betwixt and between, choosing among races that are shorter than ideal and those that are longer.

“I do think seven-eighths is probably her best,” Murray said with a chuckle.  “So we might be in trouble now — no seven-eighths at Pimlico.”

“She always tries,” Murray added.  “She’ll do anything you ask her to do.”