In Colonial Downs dispute, OTB tellers stuck in the middle

It appears the dispute over the live racing days between Virginia horsemen and Colonial Downs officials will leave February and enter March.  The Virginia Horsemen’s Benevolent and Protective Association (HBPA) board met on February 25th and did not take any official action towards a resolution.

Meanwhile, Virginia’s Secretary of Commerce Maurice Jones is working with both sides of the stalemate that began in late January and has shut down wagering on Thoroughbred racing on Colonial’s Off-Track Betting network throughout the Commonwealth.

“There are some fundamental differences,” noted Colonial Downs President and CFO Ian Stewart.

“It’s very unfortunate that the OTBs are shut down (for Thoroughbred racing), but there is still on-line wagering through EZ horseplay or any of the other 3 ADW companies approved in Virginia,” commented Frank Petramalo, the executive director of the VHBPA.

Colonial had originally proposed a 2014 schedule of just 12 live days over four weeks.  It has, however, said that it would accept a reprise of last year’s schedule, which included 25 live days over five weeks.  The HBPA’s proposal included 32 days over eight weeks.

Yet left at the starting gate are those caught in the middle, like the mutuel tellers and food service employees who work in Colonial’s OTBs.  Four OTBs are closed as a result of the “staredown” while another four, (two in Richmond and one each in Hampton and Chesapeake) remain open but with reduced hours for harness wagering only.

The impasse over summer live Thoroughbred racing live days is having an impact on their lives well before the first day of spring arrives.

“There are people that are out of work,” acknowledged Colonial’s Stewart.  “I’m sure it’s tough.”

Yet right now, those people are not feeling very appreciated.

“We don’t see a future in it.  I’ve never been like that,” says Dusty Melton, a teller currently dealing with depression and anxiety over the impasse.  “When we go to work, we’re afraid the doors are going to be locked.”

Melton was hired by Colonial prior to the grand opening of the Richmond OTB in December of 1996. For nearly two decades, she has seen the rewards of what friendly service can mean at the window.  A major portion of Melton’s income comes in the form of tips, so while she still has a job as a full-time teller, she is taking a substantial pay cut.  Melton now accepts wagers from $2 harness bettors at night instead of the big money Thoroughbred bettors she would see during the day.  With her shifts switched to late afternoon and evenings, it’s been difficult on her household as a single mom with two teenagers in school.

[pullquote]“There are a lot of people that enjoy coming in, but right now there are a lot of bets not being made.  I don’t see who’s winning.  I just hope they can work something out.” — Robert Young[/pullquote]

Melton still sees many of her customers who come in to see how tellers are doing without betting.  They are also a source of news about the disruption.

“They look out for us more than Colonial does right now,” says Melton about many of her longtime customers.  “They have no other reason to come in other than to say ‘hi.’  We hear more from them than Colonial right now.  They leave us in the dark.  They’re still getting a piece of the pie, but we don’t.”

Teller Robert Young also had been punching and cashing tickets since 1996.  While Young is approaching retirement age, he maintains a vision of how a successful wagering future can work.

Young has seen people come into the West Broad Street parlor and enjoy pari-mutuel wagering as a great form of entertainment but right now, these days are the darkest he’s seen.

“It’s tough to go in and just sit there,” says Young who calls in several times a week to see if he is working.  “It’s very ‘iffy.’  The morale is not good there anymore.  Everybody is on pins and needles.  All we can do is the best we can.”

Colonial would not disclose the number of full and part-time employees employed in the OTBs, but it’s estimated that the number of full-time tellers in the Richmond OTB prior to the standoff was around 10, with another 15 part-time tellers rounding out the work week in that facility, one of eight that were in service in January.  While the full-time shifts have been altered, the part time shifts have virtually disappeared.

Beverly Southers, a part-timer teller who retired from the Virginia lottery in 2004, is another in a dwindling class that has worked since Richmond’s grand opening.  Having some seniority, she now may be fortunate to complete two shifts a month.

“I absolutely love my job,” says Southers.  “I feel like the customers like me and I enjoy them.  We have made a lot of friends.  A lot of our customers are our friends now.  When customers ask me about what’s going on, I just try to remain positive.” 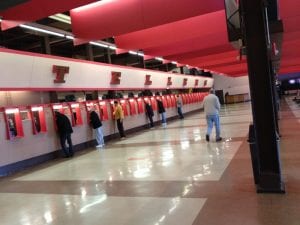 The OTB employees, the first impacted by the disagreement, work at the most critical point of the industry’s financial flow, where disposable income becomes handle.  With the development of self-serve windows and advance deposit wagering, the number (and role) of tellers has diminished.

Still these tellers serve a valuable role with beginning bettors, those who don’t trust their own keypunch skills or those who simply prefer the human element of making wagers the traditional way.  As racing’s human face in the OTBs, they can serve a role in the growth of racing’s economic future.

They may be feeling pretty small in Virginia’s racing equation these days, but if you get enough plankton, you can feed a whale.