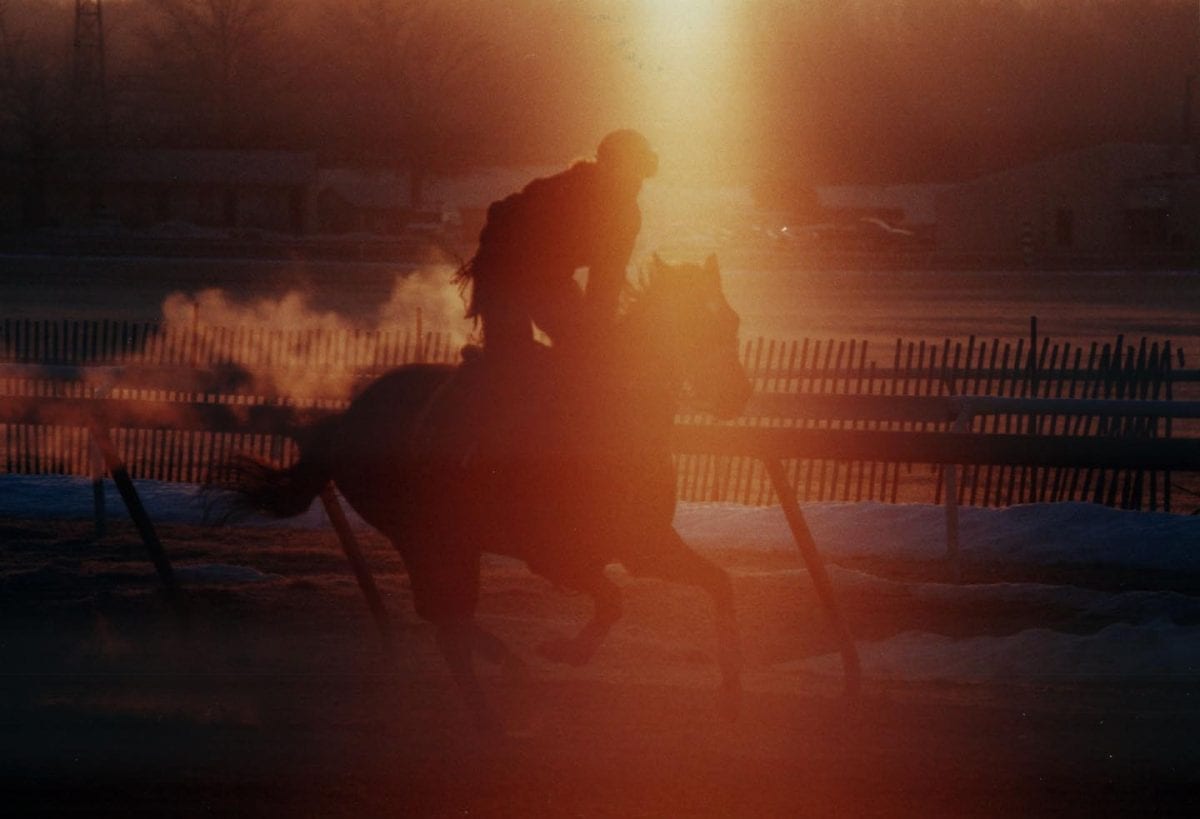 Anyone connected electronically with Lisa Molloy began seeing her queries pop up on social media earlier this month. On Twitter and on Facebook, on personal and organizational pages, she began her own investigation, trying to get to the bottom of what she suspected was a scam.

Late in 2012, a Booster.com t-shirt campaign was set up, allegedly to raise money for ReRun Thoroughbred Adoption, based in Suffolk, Virginia, and Remember Me Rescue, in Burleson, Texas.

Problem was, none of the money was finding its way to the organizations.

Booster.com is an online fundraising platform, offering organizations the opportunity to design and sell t-shirts, with an unspecified amount of the proceeds benefiting the fundraising campaign. It’s the online equivalent of the bake sale to raise money for new team uniforms. 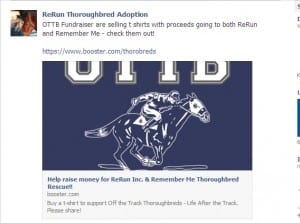 The auto-generated link to the Booster site that Lisa Molloy placed on ReRun’s Facebook page.

“Fast & Easy Set Up. Free to Run. Unlimited Potential,” boasts the Booster.com site. The site also says that campaign funds can be sent to the organizers or to the recipient of their choice.

When Molloy, the program director for ReRun, became aware of the campaign this past November, she shared a link on ReRun’s Facebook page. The text generated by the link read, “Help Raise Money for ReRun Inc. & Remember Me Thoroughbred Rescue!!”

In response to a follower’s query, Molloy acknowledged that the organization selling the shirts was not part of ReRun, but a separate group fundraising for her organization.

At least one ReRun supporter got a Facebook friend request from a group calling itself “OTTB Fundraiser,” a page that no longer exists.

But by the beginning of February of 2014, neither ReRun nor Remember Me Rescue had received any of the promised funds, and Molloy began posting queries.

Several followers said that they had bought and received the t-shirts; Remember Me Rescue’s co-founder Donna Keen confirmed that, like ReRun, her organization hadn’t received any proceeds from the sales. Keen also wrote that she had spoken with a representative of Booster.com, who told her that a check had been sent to “a lady in Alaska.” 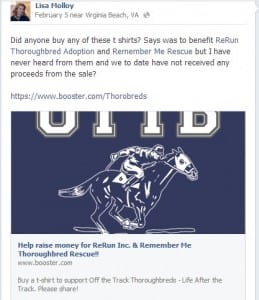 By February, Molloy had begun to smell a rat.

Keen exhorted on ReRun’s Facebook page, “DO NOT BUY A SHIRT, THIS IS A SCAM!!!!” posting a link to a similar fundraiser set up at another site, the page for which has since been taken down.

Vicki Morgan, a member of the board of directors of Remember Me Rescue, said that neither she nor Keen was aware of the fundraiser until Molloy had contacted them about it. Morgan said that Booster.com responded immediately to their inquiry about it, saying that the matter was being referred to upper management so safeguards could be put into place to avoid a similar situation in the future.

Booster.com has not responded to multiple requests for comment.

“It just makes me so angry,” said Morgan, “that people are running around scamming and that people, probably working people like us, bought the t-shirts thinking that they were helping two really good rescues raise money.”

The current page for the Booster.com fundraiser lists the organizer as “Off the Track Thoroughbreds – Life After the Track.” It also notes, “All funds raised will go to V S, the organizer, for bringing awareness to OTTB’s!” [emphasis theirs], and that 212 shirts were told, with $1,640 raised.  The campaign, according to the site, is now closed.

“That would have been $800 to each of us,” lamented Molloy. “It would have paid for a horse on full board.”

She is less concerned about the money, though, than she is about the likely skepticism that might now be directed to legitimate fundraisers. 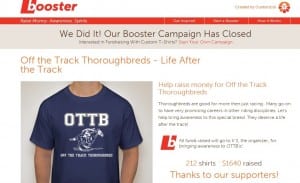 New OTTB Booster page explicitly states that the proceeds go back to the organizer and not to any charitable organization.

“The damage is done,” she said, adding that anyone interested in supporting an organization should, in most cases, buy the products directly from the organization or simply make a donation.

She is, at the moment, making an exception to that advice.

Hayley Blanchfield follows ReRun on Facebook and has owned a couple of retired Thoroughbreds. One of them, Joy Drive, just turned 22; he won three times from 50 starts, racing primarily at Delaware Park, Garden State, Philadelphia Park, and Penn National. In the aftermath of the discovery of the fraud, she felt so badly about the scam that she set up her own Booster.com fundraiser, with ReRun’s blessing.

“I saw ReRun’s logo and I thought, ‘That’s kind of cute,” she said. “I used to design t-shirts for promotions at a bar I used to work out, and I thought, ‘I could put that on a shirt, and maybe we could make more than that person took.’”

For Email Marketing you can trust.
[/boxify]A dog groomer who lives just outside of Washington, D.C., Blanchfield worked with Molloy to set up the fundraiser. So far, her campaign has fallen short of the fraudulent one, but she’s hopeful that she can sell enough make up for what was illegitimately raised.

“You can buy a t-shirt for $20,” she said, “so you get something for your donation [to the organization], and you can feel good when you wear it.”

You can also be sure that in this case, the money will go where it’s supposed to.