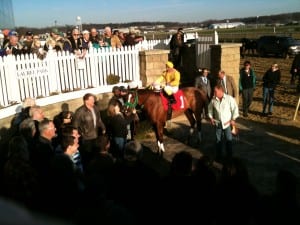 A festive crowd as Rapid Redux wins for the 19th consecutive time in 2011, and 21st overall. Photo by The Racing Biz.

For Email Marketing you can trust.
[/boxify]Rapid Redux was claimed by owner Robert Cole, Jr. and trainer David Wells for $6,250 in October 2010 from owner/trainer Kevin Fields at Penn National.  The Pleasantly Perfect gelding won that day but was disqualified and placed eighth.  He won his first start, against allowance foes, for his new connections, then finished eighth in a starter allowance.  He didn’t lose again, winning 22 consecutive races — virtually all in starter allowance company, and occasionally benefiting from numerous scratches — before being retired.