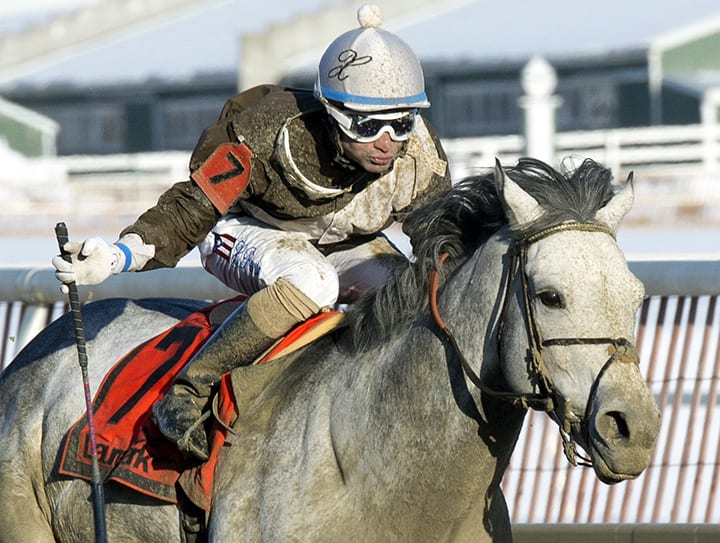 Monday’s 10-race card was the first since last Wednesday. A powerful storm dumped 17 inches of snow and nearly an inch of ice at the central Maryland track last week which caused Laurel officials to cancel live racing February 13-15. The $300,000 Barbara Fritchie Handicap (G2) was postponed a week until this Saturday.

Under Xavier Perez, Bandbox, who is trained by Rodney Jenkins, completed the 7-furlong distance in 1:24.18 and won by four lengths.

“Mr. Jenkins told me this race could set up really well for us today and it turned out just like that. He broke really well and I just kept him comfortable and kept him behind everyone as long as I could. I had so much horse underneath of me,” Perez said. “When we got near the top of the stretch I swung him to the outside and he just dragged me to the front.”

The 6-year-old son of Tapit posted a third place finish against optional allowance company on January 30 after missing nearly a year and a half of action. He won three stakes races during his two and three-year-old campaigns but missed nearly nine months after winning the 2011 Private Terms. He was winless in six starts from December 2011-August 2012 then fractured sesamoid and was on the shelf for the last half of the year and all of 2013.

“This horse has had problems all of his life,” said Jenkins. “He has run up on other horses and almost always had troubled trips and physical problems, like chipping his sesamoid and having suspensory problems but the horse came into the race beautifully.”

“I have always dreamed of winning this race and today our dream came true,” added Jenkins. “We don’t really have a plan for him after this race because our goal was to get the job done today.”

“Mr. Jenkins did a tremendous job off such a long layoff, added Perez. “It feels really great to win this kind of race.”

Tenango finished second, a half-length ahead of Service for Ten. Betting favorite Palace edged Broad Rule and Smash and Grab in a photo for fourth place. Well Spelled and Warrioroftheroses rounded out the field.

Defending champion Javerre scratched out of the race because horses are not permitted to ship out of Parx Racing. The Philadelphia track is under quarantine due to a suspected case of equine herpes.