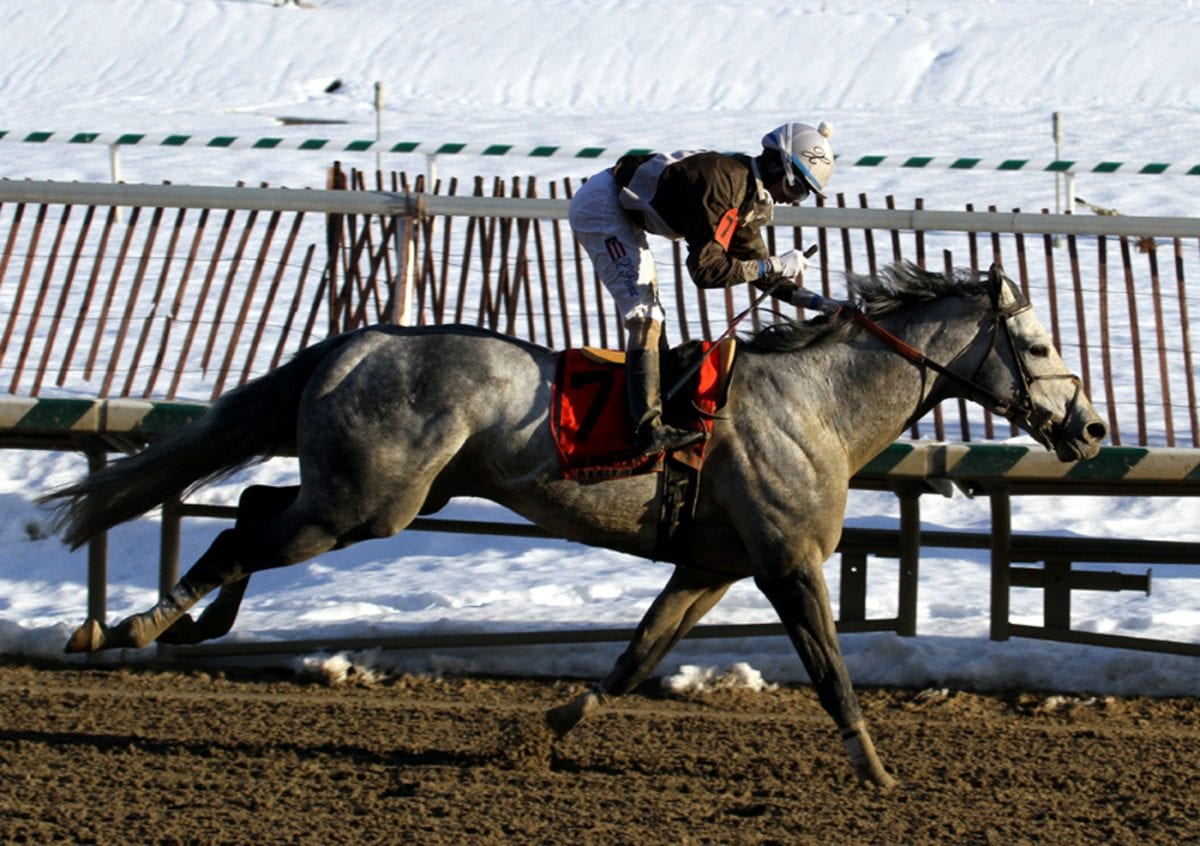 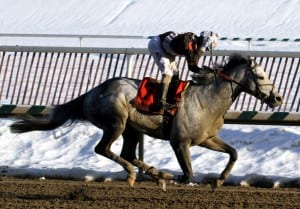 Xavier Perez exults as he and Bandbox roll to victory in the Grade 3 General George. Photo by Laurie Asseo.

“I’m afraid to ask what’s next for him,” owner Ellen Charles was saying in the paddock yesterday after the Grade 3 General George.  “I don’t want to get too far ahead of myself.”

And who could blame her for wanting to savor the moment a little longer?

Bandbox, her amusingly named six year-old son of Tapit out of the unraced Grand Slam mare Empty the Bases, had just posted his first win in nearly three years.  Making only his second start since the summer of 2012, the grey horse bided his time behind the speed in the seven-furlong race, came well wide leaving the turn, and cruised to an impressive four-length win, rewarding his relatively few backers with a $28.20 win payout.

Few backers, perhaps.  But this one went — surprisingly enough for a horse whose promising career has twice been derailed by physical ailments, including a chipped sesamoid — exactly according to plan.

“It set up perfect,” jockey Xavier Perez, aboard Bandbox for the second time, explained.  “It set up the way [trainer Rodney Jenkins] said it was going to set up.  I expected my horse to run the way he ran.”

As did Charles, who allowed that the connections had had their eye on the General George when they entered Bandbox in an allowance event at Laurel on January 30. That day, the horse ran willingly against a salty crew at a 5 1/2 furlong distance that figured to be too short for him to run his best.

So on the one hand, it was no wonder that they would target the General George.  After all, Bandbox had been first or second in all five of his tries at the race’s seven-furlong distance — a distance at which no other horse in the race had won.  And Bandbox was a three-time stake winner at two and three.

Still, there were the not inconsequential matters of the 17-month layoff before that January 30 race — and the seven-race losing streak he brought to Laurel.

“I was nervous about [.[targeting the General George],” Charles said, “just because I thought, ‘If he doesn’t show up, we had spent 17 months hoping he would come back.'”  She laughed and added, “Pretty much, I think he’s come back.” 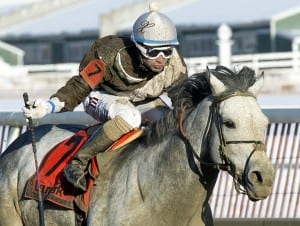 He has and, though he really hasn’t been anywhere, to some extent, so has Xavier Perez.

Perez rose to prominence last year as he enjoyed a career season punctuated by his successful partnership with trainer Ollie Figgins, III and Dance to Bristol, whose lengthy winning streak earned her a spot as an Eclipse Award finalist for champion filly and mare sprinter.  Though she didn’t win that award, the recognition was well deserved.

Yet her retirement, following November’s Breeders’ Cup, seemed to take something out of Perez, too.  Truth be told, Dance’s retirement took something out of all of her connections.  The day of her retirement ceremony, in Laurel’s winner’s circle, Perez, Figgins, his family, owner Susan Wantz, and her husband David choked back the tears as they, and the fans, honored once more the best horse they have been — perhaps ever will be — associated with.  It was — and felt like — goodbye.

For Perez, what had been a sluggish meet turned into a long slog through fall and winter.  He won only nine times at Laurel during the fall meet, and entering yesterday’s races, had just two victories during the winter meet.  Trevor McCarthy leads the colony, with 28 winners in 2014.

Yesterday, though, those same connections reconvened in Laurel’s paddock — standing in for the winner’s circle — with broad smiles on their faces to accept the trophy as Dance to Bristol was named Maryland-based Horse of the Year.

“This was easy,” someone said.  The horse was happy and healthy; the awards were still coming in.  That November day wasn’t goodbye, after all.

“I was a little bit emotional when I saw the presentation they did for Dance to Bristol because I miss her,” said Perez.  “It’s a good feeling to win this race on the same day.” 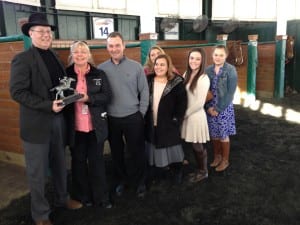 Talk among Dance to Bristol’s connections drifted in other directions: her impending breeding, the two maidens awaiting their first race.  The future.

Which is where Charles’s mind was pulling her, in spite of her efforts otherwise.  “He was a horse that was young and exuberant, and he was always getting himself in trouble because he wanted to get ahead of the other guys,” she said of Bandbox.  “Now he’s grown up, and he ran a very grown-up, wonderful race.  As long as he stays sound, I think we’ve got a lot of excitement ahead of us.”

Perez, who recently reconnected with J.D. Brown, the agent who had his book for most of last year, hopes so.  “I’ve been struggling a little bit with my business,” he explained.  “It feels really good to win this kind of race at home, here in Laurel.  Hopefully, we’re going to start going pretty good like we were last year.