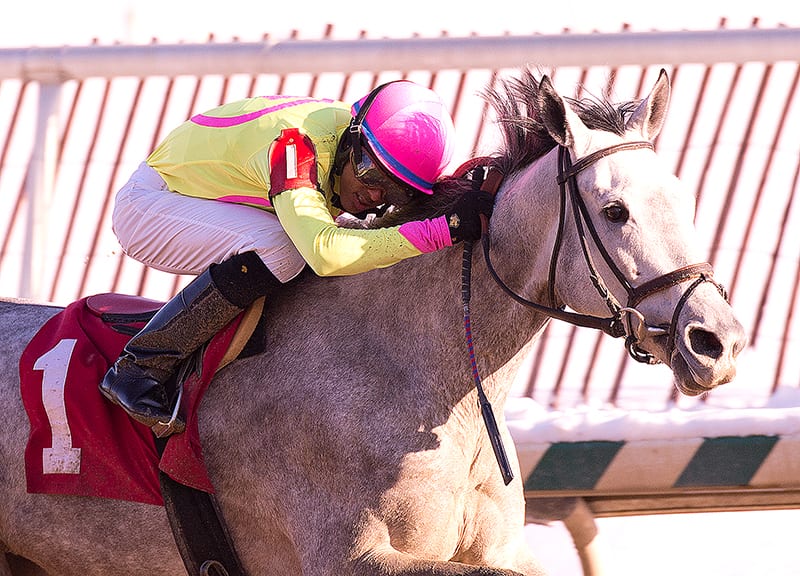 Add yet another achievement to Victor Carrasco’s resume.

The young rider, who led the nation’s apprentices in wins and earnings in 2013, locked down the first stakes victory of his career on Saturday aboard Michael Dubb, Bethlehem Stables LLC, Elkstone Group & David A. Ross’ Firenze Feeling.  Horse and rider saved ground to the far turn, angled outside and caught the frontrunner and then drew away to win the $100,000 Nellie Morse Stakes, the third of four stakes races at Laurel Park today.

Firenze Feeling is a lightly raced daughter of Macho Uno. She was making her first start since January 19, 2013 and her first for trainer Rudy Rodriguez.

“Rudy told me to wait on her and to find room when I was ready,” Carrasco said. “When I found the room I got her to run and she was strong. We clipped heels on the first turn but when I got her to relax and she got some dirt kicked on her she was fine.”

Carrasco led all apprentice riders in victories (215) and earnings ($4.3 million) last year. Since November 13, he has ridden at least one winner in 27 of the 31 live racing days at Laurel Park, including 18 multiple win afternoons.

“Rudy has really helped me by letting me ride his stakes horse as a bug rider,” added Carrasco, who will find out Wednesday if he is a finalist for the Eclipse Award for top apprentice jockey in North America. “Rudy has really been great to me.”

Firenze Feeling completed the 1-1/16th mile distance in 1:48.69, winning by 4-3/4 lengths and paying $5.80 as the second betting choice. Pacesetter Celtic Katie finished second, while Access To Charlie was third.