The holiday season can bring out the best in us, and racetracks are no exception. Though philanthropic initiatives proliferate throughout the year, at Thanksgiving and Christmas, racing people, both front side and back, make extra efforts to help those less fortunate.

The holiday work of the Central Pennsylvania Racetrack Chaplaincy of America (RTCA) Council and chaplain David Dow began at Thanksgiving, when the Chaplaincy offered a Thanksgiving Day meal to the backstretch workers at Penn National.

“People move around from track to track,” he said, “and they appreciate a family gathering.”

Approximately 60 people live on the Penn National backstretch; nearly 600 people, including maintenance and security, work on the backside. 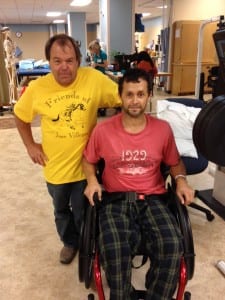 On the night before Thanksgiving, Penn National hosted a “Food for Friends” food drive to support the Chaplaincy’s Food Bank. Track patrons who brought a non-perishable food item to donate received a mystery wagering voucher worth between $2 and $100.

“People can come to the food bank when they’re having a hard time and are short on money,” Dow explained. “We can’t offer them money, but we can give them some extra food.”

At Christmas time, several local churches “adopt” backstretch families for whom to purchase gifts; Dow estimated that eight or nine families participated in the program this year.

In addition, the Penn National chaplaincy will host a candlelight service and meal on Monday night, December 23, and a Christmas day meal from 11:30 am to 1 pm, staffed by volunteers from the churches, who bring hot meals to serve.

The meal is funded by local churches and the Grantville (PA) Food Pantry.

Workers at Bowie and Laurel will also be treated to a Christmas day meal, courtesy of the Maryland Horseman’s Assistance Fund and the Maryland Jockey Club.

“We split the costs 50/50,” said MHAF executive director Bobby Lillis. “We seat everybody who comes in. People have work to do on Christmas and the horses have to be fed. If you find yourself working on these holidays, you’re certainly welcome to a free holiday meal.”

“We don’t turn anybody away,” said Lillis, adding that the families of backstretch workers are welcome at the holiday meals.

Up at Charles Town, a Thanksgiving food drive netted 6.22 tons of food, according to vice president of racing operations Erich Zimny.

“There are teams comprising two or three different departments,” he wrote in an e-mail, “where each team has its own pallet that gets weighted. There can be a little fun competition between the departments as to who raises the most. We’ve collected more than 80 tons of food since 2005.”

Other fundraising events raised about $8,000, which was donated to the United Way.

During the holiday season, the track’s food and beverage department bakes pies to sell in the employee café, with proceeds being used to buy toys for local toy drives.

Back in Maryland, trainer Tim Keefe is a one-man fundraising army, and while his efforts don’t always coincide with the holidays, they did this year when he and his family traveled to Mexico so that he could compete in the Ironman Cozumel triathlon, comprising a 2.4 mile swim, 112-mile bike ride, and 26.2 mile marathon on December 1, raising money for the Foxie G Foundation and the Ulman Cancer Fund for Young Adults.

“Being in a triathlon takes time to plan,” he said, in something of an understatement. “Being married with four kids who are 13 and under makes it even tougher, so competing during Thanksgiving week made it a little easier because of the time off.”

[pullquote]There can be a little fun competition between the departments as to who raises the most. We’ve collected more than 80 tons of food since 2005.” — Charles Town’s Erich Zimny[/pullquote]

Keefe first got involved in such rigorous competitions not to help others, but to help himself.

“As a kid I always rode horses,” said Keefe, “and when I first got into training, I galloped a majority of my own horses.”

As he got older and his business grew, he was no longer able to do that, so he started looking for other ways to stay fit and indulge his competitive streak. On the advice of a friend, he started training for triathlons.

“I got hooked on doing them,” he said.

Finding homes for retired racehorses has long been a priority for Keefe–a page on his website highlights the second careers of horses he’s trained–so he chose the Foxie G Foundation as one of the recipients of his triathlon fundraising. Devoted to rescuing, re-homing, and rehabilitating Thoroughbreds, the foundation also supports trap-neuter-release programs for feral cat populations.

Keefe chose the Ulman Fund as the other recipient because, he said, cancer has affected everyone in one form or another. The organization works to create and support networks of young adults battling and surviving cancer.

Keefe wanted to raise at least $3,000 for each organization, a goal he has not yet reached. Those interested in contributing can do so at Keefe’s website.  For many of us, the holidays can mean a break and the opportunity to celebrate with family and friends. Life at the racetrack, in an office or a barn, often means exactly the opposite, but thanks to the efforts of those in whom the spirit of giving is alive and well, the holidays at Mid-Atlantic racetracks offer a little more for which to be thankful.

From everyone at The Racing Biz, happy holidays to you and yours!