This morning, amidst a gray and scroungy day, Parx Racing canceled for the eighth consecutive day, and one imagines that a lot of people whose pay depends on being busy — jockeys, for example — are “bah humbuging” 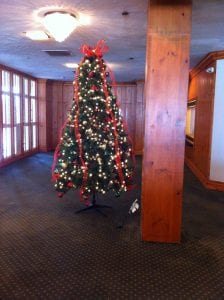 For mid-Atlantic fans, there’s plenty under the racing tree this year.

rather more than is seasonally appropriate.

Many of Maryland’s horsemen are belatedly angry that medication rules are slated to change on January 1.  Plus, Penn National Gaming didn’t win the cutthroat bidding for the newest casino license in Maryland, and that means that the harness track, Rosecroft Raceway, may have a future measured only in months.

Speaking of Penn National, the track announced its 2014 racing schedule which includes, in 200 days of live racing, all of six stakes races not restricted to state-breds.

It’s easy enough for racing people to concoct a lengthy parade of horribles: takeout’s too high and drug rules too lax, too few people attend the races except on those rare days when there are too many, too many cheats win too many races, and bad riders, don’t even get started on bad riders.

And yet, at this festive time of the year, there’s something to be said for cataloging what is right in lieu of, or at least in addition to, what is wrong.  Counting, as they say, our blessings.  In fact, let’s do just that, let’s count ’em, or at least 10 of ’em.  We are blessed that…

Merry Christmas and happy holidays to all!