Charles Town has received approval from the West Virginia Racing Commission for its racing and stakes schedule for 2014.

The schedule includes 220 live racing dates beginning with Charles Town’s January 2 card, with four live days per week from May through October and five live days the remaining six months.

In building on their transition to Tuesday night racing over the past few years, Charles Town will run all of its cards during the evening in 2014, with racing being conducted Tuesday through Saturday when five days of live racing are held and between Wednesday and Saturday when there are four performances per week.  Post time for the first race on all of Charles Town’s 2014 live programs will be its standard evening start time of 7:15pm EST, with the only exceptions being Charles Town Classic day on April 19 and Race for the Ribbon day on September 20, both of which get underway at 5:00pm and feature 13 races.

The stakes schedule features the Grade 2, $1.5 million Charles Town Classic and the Grade 3, $500,000 Charles Oaks, the former in April and the latter in September.

The 2014 stakes action at Charles Town kicks off on April 19 with the centerpiece of the track’s season – the $1,500,000 Charles Town Classic – as well as 5 other stakes on the evening’s 13 race program.  With its $1,500,000 purse, the Charles Town Classic continues to occupy its position as the richest race in the United States outside of the Kentucky Derby and Breeders’ Cup. 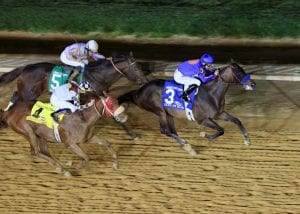 Game On Dude holds off Ron the Greek and Clubhouse Ride to win the 2013 Charles Town Classic. Photo by Coady Photography.

Most recently, the 2013 Charles Town Classic provided the race’s most memorable finish to date with winner Game on Dude, runner-up Clubhouse Ride and third place finisher Ron the Greek separated by just a half-length on the wire.

The most lucrative race on the April 19th undercard will again be the $200,000 Sugar Maple presented by CANTER Mid-Atlantic for fillies and mares going 7 furlongs.  The Sugar Maple has been run on the Charles Town Classic undercard since the inaugural running of both races in 2009 and was won in 2013 by Dance to Bristol, who would go on to win the Grade 1 Ballerina for trainer Ollie Figgins, III. Joining the Sugar Maple will be the $100,000 Robert Hilton Memorial, $50,000 Webb Snyder Charles Town Dash as well as the $50,000 Original Gold and Confucius Say for accredited West Virginia breds.

The Charles Town Oaks stands alone as the main event for the September 20 Race for the Ribbon card that includes 7 stakes. In addition to its newly minted grade, the Charles Town Oaks received a purse increase to $500,000 for 2014. With its $500,000 purse, the race joins the Test (G1) at Saratoga as the richest sprint for three-year-old fillies in the country.

“Between being graded for 2014 and how productive the Charles Town Oaks has been to date, we felt moving the purse to $500,000 should give us a true, marquee race that we can build a better event around,” said Hollywood Casino at Charles Town Races Vice President of Racing Erich Zimny.  “As a $500,000 graded race in late September, it’s our hope that the Charles Town Oaks can have some Breeders’ Cup Filly & Mare Sprint implications going forward.”

In 2011, Bobby Flay’s Her Smile competed in the Charles Town Oaks prior to running third in the Breeders Cup Filly & Mare Sprint less than 7 weeks later. The runner-up in the race’s 2011 edition – Groupie Doll – won the Filly & Mare Sprint in both 2012 and 2013.

Joining the Charles Town Oaks on the Race for the Ribbon card is a trio of unrestricted stakes, each worth $100,000.  The Researcher for three-year-old sprinters takes a purse decrease from the $400,000 it has stood at since 2010, while the Wild & Wonderful and Pink Ribbon each got bumped up into six-figures. Three $50,000 stakes for West Virginia breds – the Rachel’s Turn, Henry Mercer Memorial and It’s Only Money – round out the Race for the Ribbon day stakes action.

Including the 5 restricted stakes conducted on the Charles Town Classic and Race for the Ribbon days, 16 stakes for West Virginia breds, totaling $800,000 in purses are currently scheduled in 2014.

Not included in that figure is the Tri-State Futurity, open to horses bred in West Virginia, Maryland and Virginia.

All told, the 2014 Charles Town Stakes schedule is made up of 25 races worth a total of $3,550,000, excluding the West Virginia Breeders’ Classics whose purses have not yet been finalized.