Eighttofasttocatch and Joint Custody strike a blow for Maryland-breds 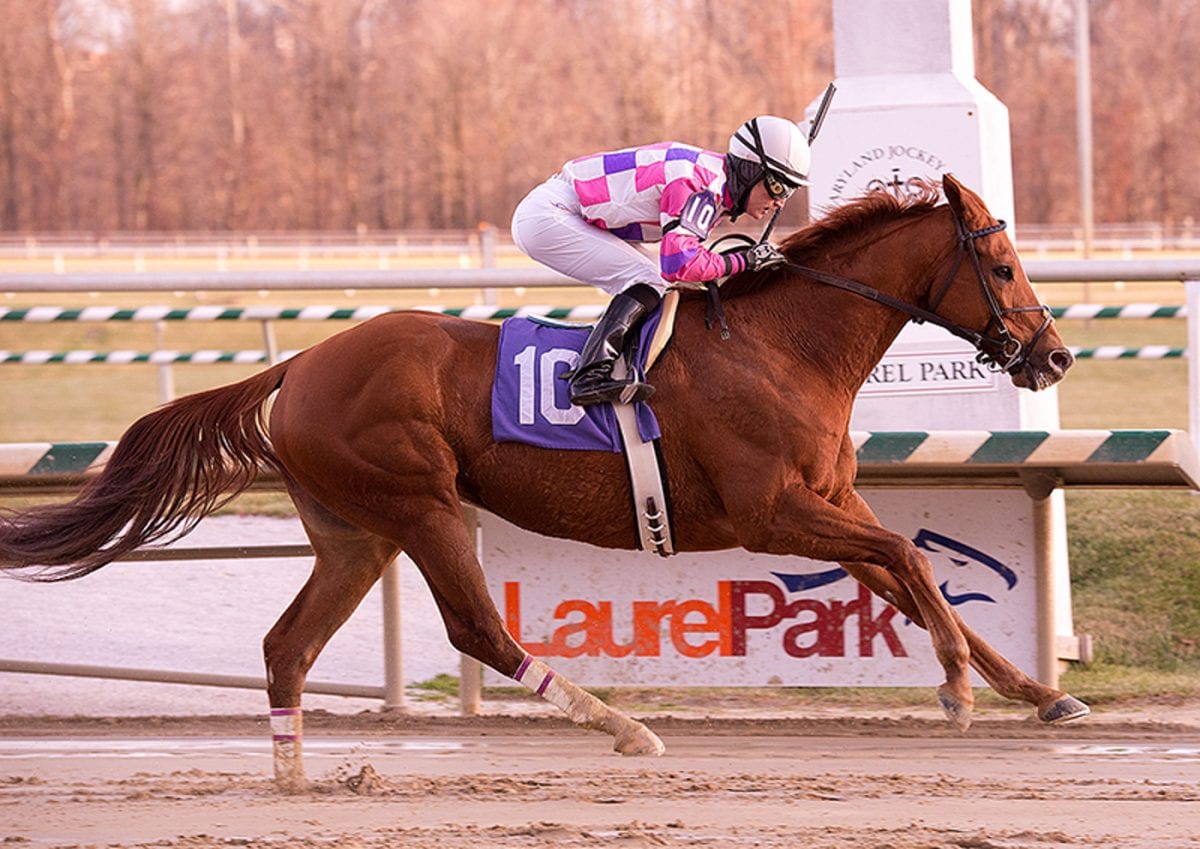 On a day when a trio of $100,000 open stakes races, contested over a muddy main track at Laurel Park, was expected to highlight the talents of several invaders, it was a pair of Maryland-breds who prevailed in smart fashion to shine some light on the quality of the state’s reviving breeding industry.

In the nine-furlong Broad Brush Stakes, named in honor of the immensely talented and well-traveled Maryland-bred who was no stranger to success in Grade I races for trainer Richard Small, it was the durable Eighttofasttocatch, with Forest Boyce in the irons, who again proved his ability to win against open company. The seven-year-old Not For Love gelding trained by Tim Keefe for owner Sylvia Heft, has won three runnings of the Jennings Handicap, two of the last three Maryland Million Classics, and finished second in the Pimlico Special last May. 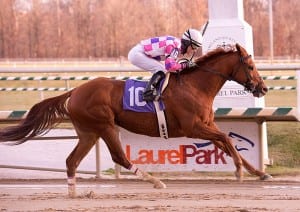 Keefe has always contended that Eighttofasttocatch prefers distances of one mile or one-mile and one-eighth, and Saturday he splashed home three lengths clear in 1:53.01 for his third straight victory, his fourth in eight starts overall this year and his 15th in 46 career outings, pushing his lifetime earnings past $900,000. Eighttofasttocatch has won 13 of 31 outings at Laurel and owns a 5-2-1 slate in 12 starts at the distance. It was also his fourth win in 11 starts over an off track.

“He’s always done well at a mile and a mile-and-an-eighth,” Keefe said of Eighttofasttocatch, who finished second in the Broad Brush last winter. “He’s always liked the off going. The track never seems to bother him. I thought he would show speed and be up close, which is how we’ve been training him lately. I was happy to see Forest let him run a little on the first turn and keep him out of trouble. They weren’t going much up front early and he was sitting in a perfect spot down the backside.”

Although Eighttofasttocatch has always thrived at distances from one-mile to a mile and a furlong, Keefe did not rule out the possibility of trying the gelding, who will turn eight next month, in the seven-furlong, $250,000 General George Handicap at Laurel on February 17. Eighttofasttocatch, who now boasts 10 stakes victories in his career, finished fourth in the 2012 edition of the Grade 2 General George Handicap.

“We are certainly going to consider the General George,” Keefe said. “I thought he ran respectably in the race a few years ago. He didn’t have the best of trips that day. He’s going to get a little break now, but we’ll certainly look at the General George. That race always comes up tough, but we might try it again. After that, we’ll have to look at the other options for him. Maybe try the Harrison Johnson again and maybe the Pimlico Special. It all depends how well he’s doing.”

In the very next race on the card, much of the attention focused on Jessethemarine, the 36-1 upset winner of the James F. Lewis, III stakes in his previous outing for John Rigattieri who was made the 6-5 favorite in the Marylander Stakes for two-year-old colts and gelding. But as was the case with the Broad Brush, fittingly the Marylander would eventually be captured by one of only two Maryland-bred juveniles in the field.

After winning his first two starts, Joint Custody finished a solid second as the favorite in the Maryland Million Nursery behind the talented It’s A Bang, then rallied from well off the pace to finish fourth in the Lewis. But Joint Custody had tried a different tactic that afternoon and trainer John (Jerry) Robb was not about to give jockey Wesley Ho the same instructions. Instead, Robb wanted Ho to allow Joint Custody to return to his natural, front-running style and this time got a better result.
[boxify cols_use =”5″ cols =”5″ position =”left” order =”none” box_spacing =”5″ padding =”5″ border_width =”2″ border_color =”blue” border_style =”solid” height =”60″]

Soon after the gate opened in the Marylander, Joint Custody displayed his natural early speed and led the field down the backside and into the far turn. Each time a rival came to him briefly, Joint Custody pricked his ears and sprinted away from him, and the Outflanker gelding held safe the late bid of Jessethemarine for a two-length score in 1:25.38. It was his third win in five starts for owner Janet Wayson, doubling his career earnings to nearly $123,000 and confirming the validity of this crop of Maryland-bred juveniles.

“I’ve always liked this colt,” Robb said. “Early on, it looked like I had a bunch of average two-year-olds, but they have all done well. This horse has some talent. He’s better when he can just get out on the lead. We had the inside in the last race and I wanted Wesley to take him back and teach him to rate and come from behind. But he didn’t like that. So today I told Wesley just let him run his race and he did. When those other horses came to him, he just pulled away from them.”

Joint Custody and Maryland Million Nursery winner It’s A Bang are expected to renew their rivalry later this month in the seven-furlong, $100,000 Maryland Juvenile Championship at Laurel on Dec. 28. With his victory in the Marylander, Joint Custody solidified the depth and quality of this group of Maryland-bred juveniles. After the Maryland Juvenile Championship, Joint Custody and It’s A Bang could meet several times next year at age three in open stakes in addition to the restricted Maryland-bred races.

“Both colts are really good,” Robb said. “It might be tough to fill all of the stakes races next spring because the open stakes and the Maryland-bred races are close together. It looks like this colt and Donnie Barr’s colt [It’s A Bang] are the two best two-year-olds here. I guess we’ll be seeing a lot of one another for a while.” 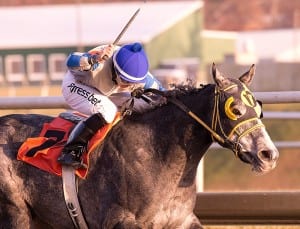 The current Marylander Stakes is a loose renewal of the former Maryland Futurity, a stakes race was once won by Challedon, a two-time horse of the year who has since earned a place in both the National Racing Hall of Fame and the inaugural Maryland-bred Hall of Fame.

For all the impressive on-track efforts, the biggest winner of the weekend might have been the Maryland breeding program itself, which saw two runners take the money against open company.  That program — reeling in recent years in the face of slots-fueled competition from nearby states — has in recent months begun to see an infusion of money for Maryland-bred runners.

And, though both Eighttofasttocatch and Joint Custody were bred before that program was a twinkle in anyone’s eye, they demonstrate the continuing ability of the state’s horsemen to breed and race a good horse.

Keefe, trainer of Eighttofasttocatch, noted, “Right now we have a handful of Maryland-breds who can compete in open stakes and graded stakes. I think my horse is still capable of doing well in the graded races and obviously Ben’s Cat is among the best turf sprinters in the country and so is Havelock. With the influx of money for the breeding program in Maryland, I think it will continue to improve.”

Robb agreed.  “There’s no doubt in my mind that the best two-year-old colts [at Laurel] are mine and Donald Barr’s [It’s A Bang] and we’re both Maryland-breds. I think we’ll see him again later this month and plenty of times next year. For a while there it looked like the Maryland-breds were dropping off, but the quality of the runners is still really high and it’s going to get better.”