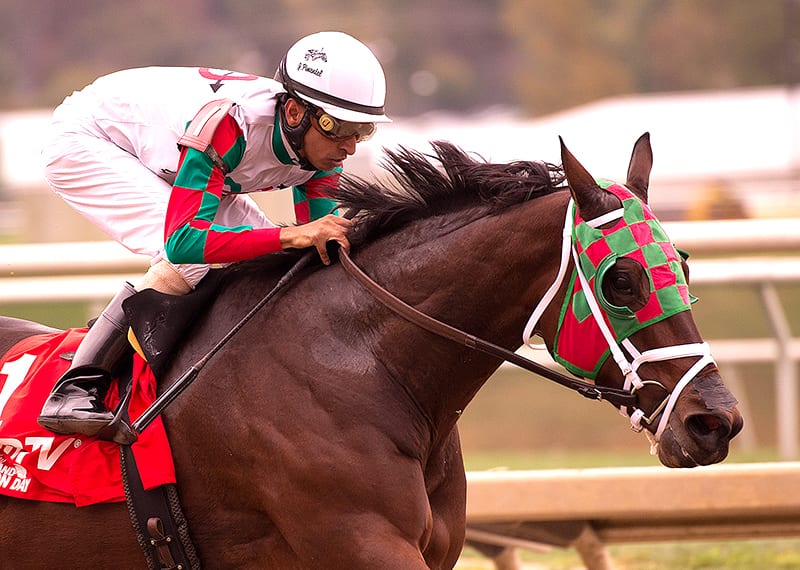 Quick from the gate and headstrong through the turn and into the stretch, Ribo Bibo carried Julian Pimentel to a 5-3/4 length score in 1:08.64 for the six furlong distance, beating last year’s Sprint winner Action Andy. The son of Preakness winner Louis Quatorze paid $3.80.

“I was just trying to slow him down a bit,” said Pimentel, who now has seven Maryland Million victories. “I didn’t have to do much, just keep him in as he came around the final turn because he was going so fast and running so easily. He is remarkable, winning so many in a row.”

Ribo Bibo’s win streak has carried him from Florida to Pennsylvania to New Jersey and Maryland, with the last seven starts under the guidance of trainer Jason Servis. Running mostly in claimers and starter allowance races, the 5-year-old has earned nearly $200,000 this year.

“Julian did a good job,” assistant trainer Carlos David said. “They were going a little fast, 22.1 for the first quarter. Julian held him and then let him go after the two horse (third place finisher Fersmiley) came up on the inside. After that, the race was over. He keeps moving up and winning races so we will take him to Florida. He is amazing.”

Ben’s Cat and Pitch N Roll scratched out of the Sprint to run in the $125,000 Maryland Million Turf later on the card.