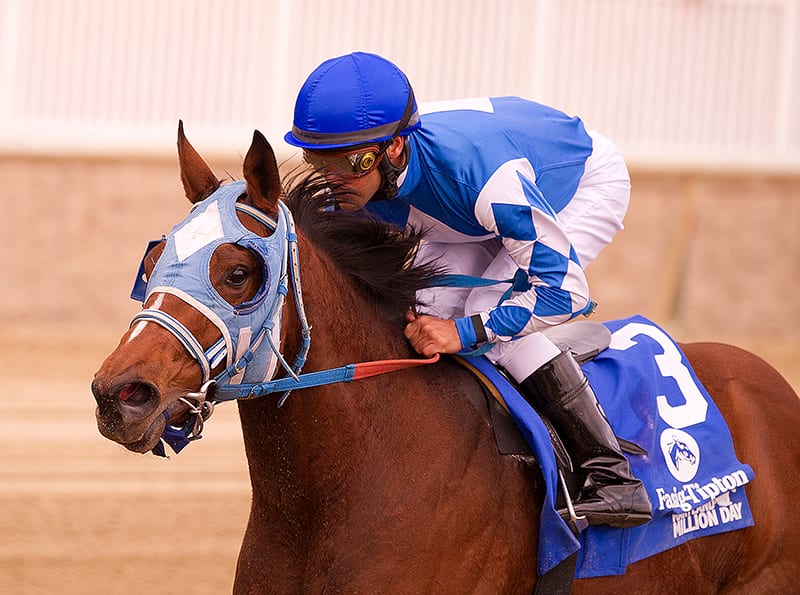 Despite steadying behind Weekends for Love down the backstretch, Brad Gould, Jr. & Hidden Hill Farm’s Jonesin for Jerry came home the easiest kind of winner in the $100,000 Maryland Million Lassie for 2-year old fillies.

Under Abel Castellano for trainer Jerry Robb, the daughter of Great Notion completed the six furlong distance in 1:11.04 and won off by 5-1/2 lengths. She paid $3 to win.

“She really made my job easy,” Castellano said. “When I got out to the stretch I didn’t have to ask her. I let her do what she needed to do and she did it.”

Jonesin for Jerry was the most experienced filly in the field, having competed in three stakes races in her first six starts, including a near-miss second in the Small Wonder Stakes at Delaware Park.

“She was pretty wound up in the paddock and I was pretty worried,” Robb said. “I was really worried when she was coming down the backstretch because she doesn’t like to be rated. She threw her head up but the jockey did a great job settling her.”

Robb, who moved into a tie for fourth place on the all-time Maryland Million win list with his seventh victory, also took the Lassie with Ameri Allen (1990) and Carnirainbow (1992).

Robb runners are now 8-for-13 at the current Laurel Park fall meet. He indicated Jonesin for Jerry would be pointed towards the Maryland Juvenile Filly Championship here on Dec. 28.