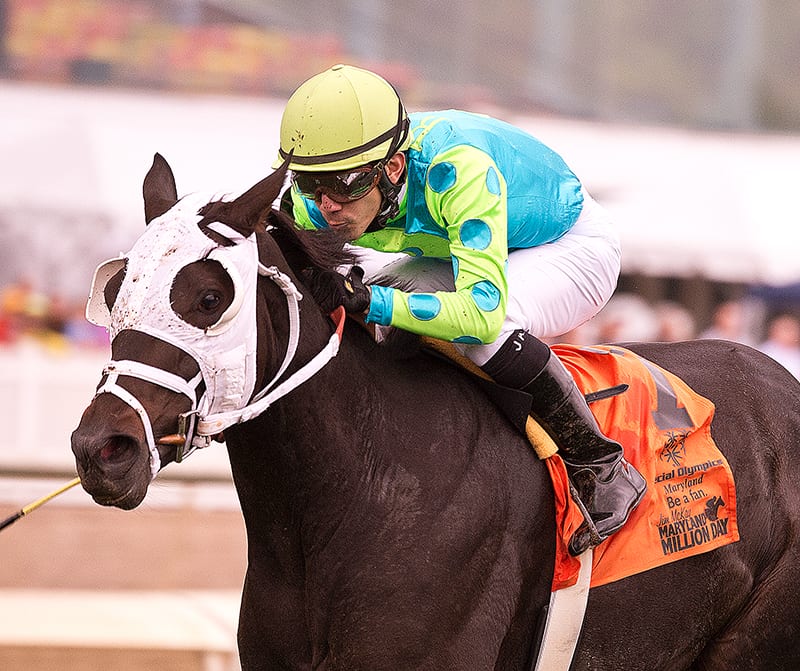 Charles J. Reed’s Monster Sleeping stalked the pace, then powered by the frontrunners to win the $125,000 Maryland Million Ladies on the turf.

Kept to task by Jose Garcia for trainer Dale Capuano, the daughter of Oratory beat Daydreamin Gracie by two lengths, as defending champion Pagan Priestess was along to take third.

“She broke very sharp,” Garcia said. “After a couple jumps the eight (Mystic Love) and ten (Daydreamin Gracie) wanted to go, so I backed her off into third position. I waited and when it was time to go at the quarter pole I asked her for run and she gave it to me. It was a perfect trip.”

The filly has finished in the money 10 times in 14 starts during her 4-year old campaign. This was Monster Sleeping’s first victory over the grass. In her previous start she finished third in Laurel Park’s Jameela Stakes.

“We had been preparing for this race for quite a while,” Capuano said. “She usually breaks well and today she broke sharp and raced like we hoped she would. We put a lot of time and effort into getting her ready and it paid off today.”

The victory was the 10th on Maryland Million day for Capuano, which moves him into a tie atop the standings with King Leatherbury. Leatherbury has a chance to move back into sole possession for first place with Ben’s Cat in the $125,000 Maryland Million Turf later on the card.

Monster Sleeping covered the nine furlong distance over the good turf in 1:53.54 and paid $10.20.