For Dance to Bristol, success is a matter of routine

Horses are creatures of routine.

To no small extent, horsepeople are that way, too, routines bound by the sandy ovals on which they train and run, clocks synchronized with the needs of horses and the rhythms of the racetrack.  Days repeating days, years repeating years, and, eventually, generations repeating generations. 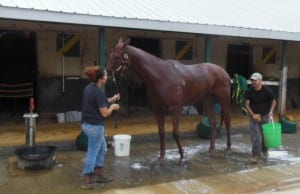 Like many horsemen, Figgins, who trains star sprinting filly Dance to Bristol, hails from a family that has been involved in racing for several decades. Both he and his wife, Clarissa McDowell, rode briefly, and their fathers rode, as did Clarissa’s uncle, Stanley Small, a longtime fixture on the Charles Town circuit.

Yet if Figgins thought he and his star pupil were blazing new trails, well, he had another think coming.  It turns out that Small, his wife’s uncle, piloted a horse named Ballerina to victory in the Maskette Handicap at Belmont Park in 1954.

Ballerina was good enough that they named a race for her, and the now Grade 1 Ballerina Handicap is conducted at seven furlongs at Saratoga each summer.

And it was a victory in that race this past August that catapulted Dance to Bristol to the front ranks of the filly sprinting division.

“When she won the Bed o’ Roses we started pointing her for the Ballerina,” said Figgins.  “After she had that rough trip in the Honorable Miss and still won that race, I knew she deserved a shot in the Ballerina and she ran big that day and held off Book Review. But going up there I had no idea my wife’s uncle [Small] had won a stakes race on Ballerina. It’s a pretty amazing coincidence.”

Amazing, yes, but founded on the same thing that racing success is always built on: routine.

In fact, throughout her long, successful campaign that truly began last winter, Dance to Bristol’s daily regimen has remained largely unchanged — and Figgins expects little to change in the run-up to the Breeders’ Cup.

“Really since the winter she’s stayed on her same schedule all year,” Figgins said Sunday afternoon after returning to the Bowie Training Center following a brief trip to Laurel where Dance to Bristol worked five furlongs in 1:01.3. “We’ve never had to alter her schedule at any point.”

When Dance to Bristol works or races, she has typically had the next two days off and then the third day resumes her normal routine. For instance, Figgins gave the filly Monday and Tuesday off from training and then put her right back on her regular schedule of gallops around the Bowie surface. Like many race horses, her day begins very early. Her groom, Juan Arias, begins to get her ready for the day at 4:30 each morning and then takes her to the track at 5:30 where she usually jogs or gallops a mile or even a mile and one-half.

“Juan usually starts getting her ready around 4:30 each morning and then he takes her over to the track about an hour later,” Figgins said. “She usually gallops a mile, sometimes a mile and a half over the track. Then he brings her back and cleans her up and she usually eats lunch around 11:30. After that she has a pretty quiet day. We make sure she finishes up and then make sure she’s cooled out okay and then around 5:30 in the evening she’ll eat dinner and we’ll make sure she eats up before she goes to sleep.”

Indeed, perhaps the only modest change to her recent schedule occurred last Sunday morning.  Figgins vanned the filly to Laurel Park from her Bowie Training Center home for one of her final two workouts before she departs to California.

“Her breeze at Laurel was simply to get her a little keyed up,” Figgins explained.  “She tends to get a little excited when she gets on the trailer. She knows she’s probably going to race that day. I just wanted her a little sharper for these last two workouts and she was tremendous [Sunday morning]. I couldn’t be more pleased.”

Dance to Bristol was one of only two horses to post a recorded work on Sunday, over a Laurel Park track rated muddy.

[pullquote]She’s actually a very well-mannered mare. Nothing seems to bother her and she never seems to bother anyone that walks by her. She’s pretty good at just taking care of herself.” — Ollie Figgins on Dance to Bristol[/pullquote]

Figgins has been able to keep Dance to Bristol on the same daily and weekly routine for nine months, a genuine rarity in horse racing when horses can suffer minor illnesses and from little aches and pains that can often force the trainer to alter the regimen slightly and even change the racing plans.  A rarity, but also an advantage.

“You know, it’s really so rare when you can map out a campaign for a horse and not have to change any of it along the way,” Figgins said. “She’s always kept the same routine. We look in on her every day at the barn and she’s usually standing there pretty quiet. She’s actually a very well-mannered mare. Nothing seems to bother her and she never seems to bother anyone that walks by her. She’s pretty good at just taking care of herself. But we haven’t had to change a thing with her since we brought her back here in January.”

Of course, one big change in routine remains.  On October 26, Dance to Bristol will board a plane at Baltimore-Washington International Airport for the cross-country flight to her date at the Breeders’ Cup.  That, you imagine, will be one memorable van ride in the life of a horse.

And once she gets to California?  Back to work.