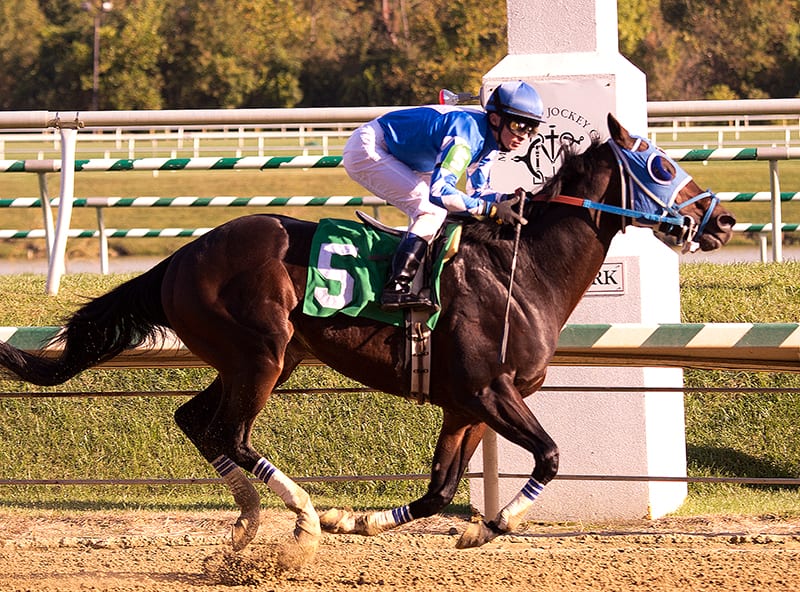 Hidden Hill Farm & Herman M. Braude’s Cherokee Artist led from start to finish in today’s 8th race feature at Laurel Park, a $50,000 allowance test at a mile on the main track. The six runners in the field had combined for 35 victories and nearly $1.9 million in earnings heading into the race.

Eric Camacho picked up the mount this morning from trainer Jerry Robb and stayed busy atop the frontrunner all the way to the wire, as post time favorite Indian Jones closed resolutely to just miss catching the leader. Cherokee Artist won by a length. The winning time for the mile was 1:36.23.

“He was getting a little tired,” Camacho said. “We set some fast fractions and for him to be there in the end proves how classy he is.”

Two races earlier, Camacho rode Mean Season ($6.60) to an impressive maiden score. The 3-year-old opened up a 15-length lead and cruised to victory in his debut, a one-mile test on the main track, stopping the clock at 1:37.08. Jose Corrales trains the son of Henny Hughes.

“He has been working lights out and I was really looking forward to today and he didn’t disappoint,” added Camacho.

FRANK WHO? FEUSTLE ON FIRE AS NEW ODDSMAKER

Keith Feustle, who replaced the retired Frank Carulli as the Maryland Jockey Club oddsmaker, is making it look easy. After the first five days of the Laurel Park fall meeting, 40 of Feustle’s 48 morning line favorites have been the actual betting favorite, a success rate of 83.3%