Strathnaver is just in time in Lady Baltimore Stakes 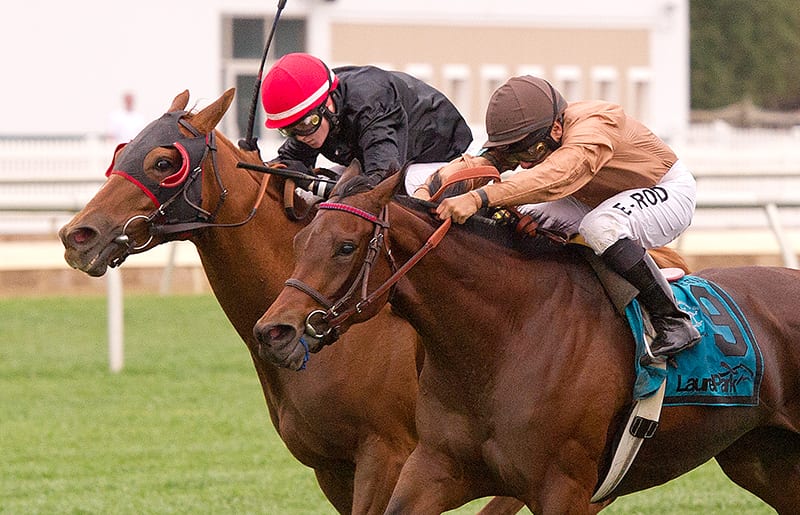 Andrew Stone’s Strathnaver (GB) travelled most of the way with the pack, then slipped out entering the stretch and was up in the final strides to win the $100,000 Lady Baltimore Stakes for fillies and mares at Laurel Park.

Second choice on the morning line but allowed to drift up to odds of 12.40-1, Strathnaver was winning for the third time in the United States after beginning her career in England. Her biggest success prior to the Lady Baltimore was a victory in the Bewitch Stakes (G3) at Keeneland last spring.

Today under Erick Rodriguez, she held off a furious late surge by program favorite Abaco and jockey Rosie Napravnik to win by a head , with Hunter Forward, who was leading going to the finish line, tiring to finish third.

Graham Motion trains the daughter of Oasis Dream. “It was a last minute decision (to ride Rodriguez),”  said Motion. “I wasn’t 100% sure I was going to run her. He rode a great race, a patient race. I told him if he had been too patient I was going to be upset but the class came through. The horse has been off since July. I took her to Saratoga but the race came off the turf and she didn’t run. This was plan B.”

“I found out earlier today that I would be riding for Graham,” said Rodriquez. “He said she had been training great and that he was disappointed in her last two races. The plan was to sit off the pace and wait, wait, wait as long as I could and then go. We were four or five back and I was just waiting to turn my horse loose. I knew I had plenty of horse left. I was just waiting for the right moment.”