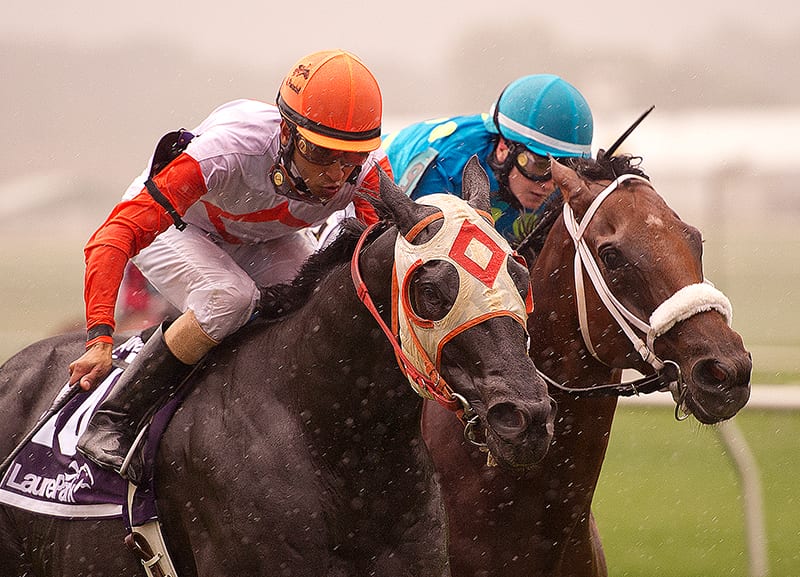 The Jim Stable’s Ben’s Cat was put to the test while being floated extremely wide down the lane and still got up to register a popular victory in the $100,000 Laurel Dash Stakes at Laurel Park.

Rosie Napravnik on Mr. Online did her best to keep Ben’s Cat from scoring his 18th stakes victory but the King Leatherbury trainee, under Julian Pimentel, is just too good on his home turf, and he completed the six furlong distance in 1:07.40. Their duel started in the middle of the stretch and ended close to the outside rail, with the margin of victory a neck.

“That was a typical Ben’s Cat race,” Leatherbury said. “He wins a lot but never by much. He’s one of the most fun horses I’ve ever trained but you just don’t know if he’s going to get there. We had given consideration to the De Francis Dash, but after I took a good look at it, I realized that there were a couple other horses that could beat us on paper. So we opted for what I thought would be the easier spot but that nine horse that Rosie rode probably ran the best race of his life. She was definitely riding to win the race and beat us.”

“He broke very good,” Pimentel said. “I sat third most of the race. I just waited for him to tell me when he was going to kick in and he did. I think that we won by about a neck but pretty easily.”

Now seven, Ben’s Cat had to recover from a broken pelvis before he made his maiden debut at age four in 2010, then began his career with eight consecutive victories. He has three graded stakes victories on his resume, all on the grass, and is 6-for-7 on the Laurel Park turf with his only loss coming in the 2012 Laurel Dash.

“We have a couple of options coming up on Maryland Million day (Oct. 19 )in either a six furlong dirt sprint or a mile turf,” added Leatherbury, who ranks fifth on the all-time win list with 6,401 career victories. “Then there’s always a race in Canada (G2 Nearctic Stakes), but let’s just say for now we’re aiming for Maryland Million day.”