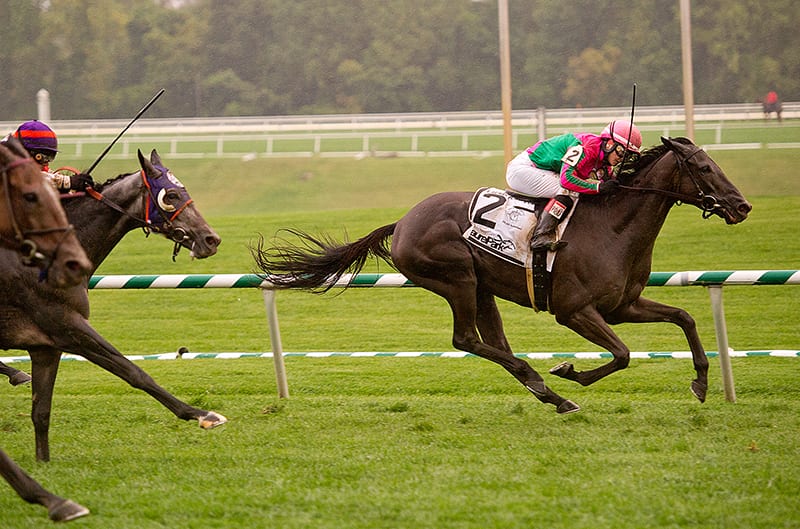 Under a patient ride by Rosie Napravnik, Tricky Hat (CHI) took the short way home, arriving first at the finish in the 1-1/2 mile $100,000 Laurel Turf Cup.

Scoring his first stakes victory and fourth lifetime win for trainer Shug McGaughey, Tricky Hat stalked the eager pacesetters while saving ground during the marathon turf test contested under rainy conditions. When the field turned for home, Tricky Hat emerged from the pack along the rail, opened a short lead and held off late closer Eagle Poise to win by a neck, with Macho Mas Macho taking third.

“We had a great trip and he handled the wet turf well,” said Napravnik.  “We were sitting in a good spot and I was able to get through on the inside. The horse was the class of the race.”

Napravnik began her career in Maryland as a 17-year-old apprentice rider in 2005.

Assistant-trainer Jenn Patterson said, “I talked to Rosie beforehand. This is the kind of horse you need to get into the race and she did that. He’d had a good run last time at Saratoga, so we decided to give him the opportunity to step up.”

The winner is owned by Andrew Rosen, Robert Trussell & Gainesway Stable.  He paid $9.80.