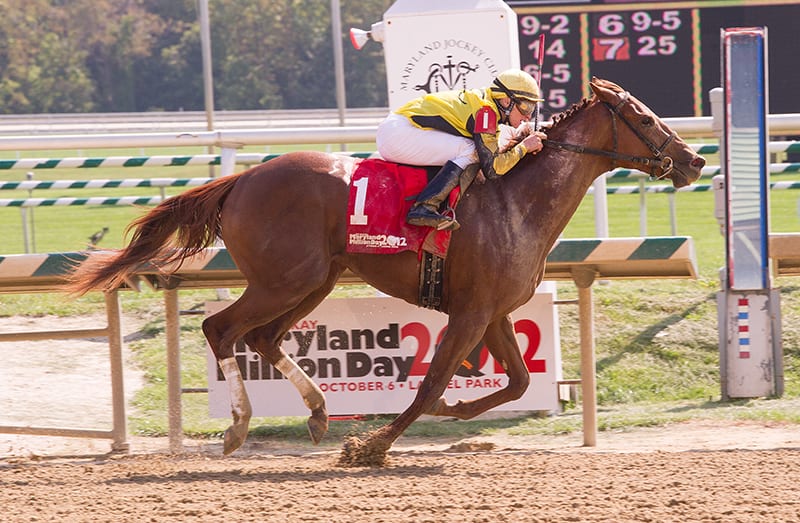 Parx Racing played host Saturday to the 13th edition of Pennsylvania’s Day at the Races, a day that celebrates the success that has become the breeding industry here in the Commonwealth.  Under beautiful sunny skies, the state’s best competed for $375,000 in purses and indeed put on a terrific show for the local fans that turned out to enjoy.  It was an afternoon that produced plenty of drama and when the dust settled, it was jockey Kendrick Carmouche who was the star of the day.

The $75,000 Mrs. Penny Stakes for fillies and mares at one mile and one-sixteenth on the turf went to Augustin Stable’s Ski Holiday.  Breaking from post four in the field of eleven, winning jockey Kendrick Carmouche deftly got her forward enough to get past the rivals on her inside and then saved ground into the first turn while running sixth through the first half mile.  Patiently watching Arlene’s Holiday set a contested pace, Ski Holiday was a good eight lengths back onto the backstretch, but then made steady progress to draw within five with three furlongs to go.  Carmouche was finally able to swing her three wide and into the clear with about a quarter mile to go and the 4 year-old Harlan’s Holiday filly responded and roared past the leaders passing the eighth pole.  Sixth and Arch would rally for second but would prove no match for the winner.  Trained by Graham Motion and sent off at 14-1, Ski Holiday paid a handsome win mutual of $31.80.  The final time over a course labeled firm was 1:41.41.

Turning back a host of challengers, even money favorite Fersmiley captured the $75,000 Banjo Picker Sprint by just over a length.  Sprinting past the quick breaking Miami Mako to take the lead after an opening quarter of :22.00, the 5 year-old gelded son of Domestic Dispute took the field midway around the far turn before Patrick S made a strong run to challenge on the inside.  After turning back that rival, turning for home, suddenly Generally George loomed a major threat on the far outside.  As Fersmiley kept going and Generally George began to level off, here came Officer Alex as he found his best stride late between horses. It would be too late, though, as he was quickly running out of racetrack.  Fersmiley held him safe to win the first stake of his 18 race career.  It was only the second start since late December for Fersmiley, who was trained by Lisa Guerrero and guided to victory by Pedro Requena.  He paid $4.00 to win and finished the six furlongs in 1:09.35.

Cavanaugh & Breen Farms’ This Ain’t No Bull won a dramatic photo to win the five furlong turf sprint, the $75,000 Marshall Jenney Handicap by a nose.  The 6 year-old gelded son of Holy Bull raced up front with the race favorite Madrilena down the backstretch, finally forcing her to surrender with a little more than a furlong to go.  Pulling out to a length and a half lead in mid-stretch, This Ain’t No Bull then had to deal with the late running Love Those Boots who was closing strongly in the middle of the course.  The two bobbed heads at the wire, with This Ain’t No Bull prevailing.  The win was his first stakes win and kept him unbeaten in three starts on his newly found preferred surface.  Trained by Cynthia Reese and ridden by John Bisono, This Ain’t No Bull went off at 7-2 and paid $9.80.  The final time was a swift :55.85.

The $75,000 Roanoke Stakes went to Thomas McClay and Harry Nye’s Norman Asbjornson.  The 5 year-old son of Real Quiet sat a perfect ground saving trip throughout the one mile and one-sixteenth main track test, but found himself pinned in behind a wall of three rivals as the field turned for home.  Winchell had gotten first run and had pinned Norman Asbjornson in behind the two fading leaders at the top of the stretch.  Winning jockey Kendrick Carmouche did a masterful job of steering his horse to the far outside after Winchell had cleared and then asked his mount for all he had.  “Norman” surged to the front with just less than a sixteenth of a mile to go and went on to win by a length.  Off as the 7-5 betting favorite, trained by Carlos Mancilla, he paid $4.80 and stopped the timer in 1:42.93.

Michael Cox’ Classy Coco held off a stiff late challenge by favorite Power of Snunner to win the $75,000 Dr. Teresa Garofalo Memorial by neck.  The 3 year-old Not for Love filly was a close seventh in the eight horse field in the opening furlong, but then found a seam beaten horses and charged through on the inside to take the lead with just over three furlongs to run.  Coming off the turn, she sprinted away to a two and a half length lead passing the eighth pole and then was dead game to hold on late and win the second stake of her young career.  Trained by Bernie Houghton and ridden by Matthew Rispoli, Classy Coco was a bit overlooked at the windows, went off at 6-1 and paid $14.80 to win.  The final time for the six furlongs was 1:10.32.