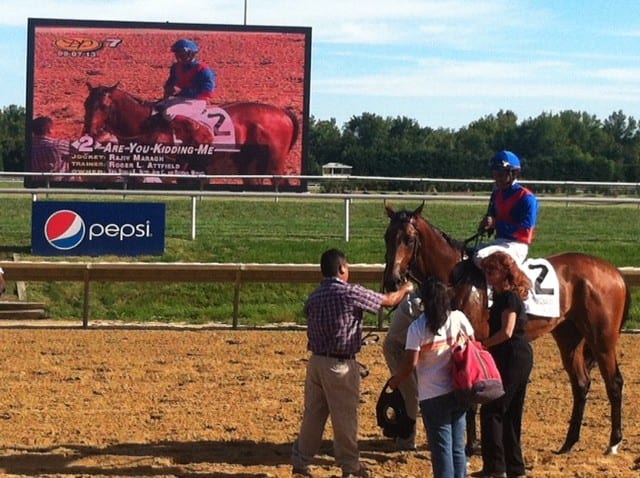 Ronald Kirk, John Bates and Michael Riordan’s Canadian invader Are You Kidding Me made every pole a winning one with his impressive victory in the $200,000 Grade III Kent Stakes at Delaware Park today.  The Kentucky-bred conditioned by Roger Attfield posted a four-length victory and returned $4.80 as the favorite in the field of seven.  With Rajiv Maragh aboard, the 3-year-old son of Run Away and Hide cut early fractions of :48.69 for the half mile and 1:11.65 for the three-quarters mile before completing the mile and an eighth over a firm turf course in 1:47.61.

“The trip was pretty straight forward,” said winning jockey Rajiv Maragh.  “He broke really willing, he got comfortable on the lead, and he had a lot left at the finish.  He broke on the lead and nobody really challenged him.  I figured if he is going to be on lead and he was comfortable, I was going to take advantage of it.  When I got to the 3/8ths pole and I asked to him to go, he really took off.  At that point, I knew they were  really going to have to finish strong to catch us.”

Michael With Us , with Gabriel Saez, finished second a head in front of Hard Enough, with Daniel Centeno, in third.

The Kent Stakes was the first stake and graded stake victory for Are You Kidding Me who raised his career mark to three wins from 13 starts with earnings of $301,689.

(Featured image, of Are You Kidding Me following the Kent, courtesy of Delaware Park.