The Delaware Handicap, shining brightly in the shadows 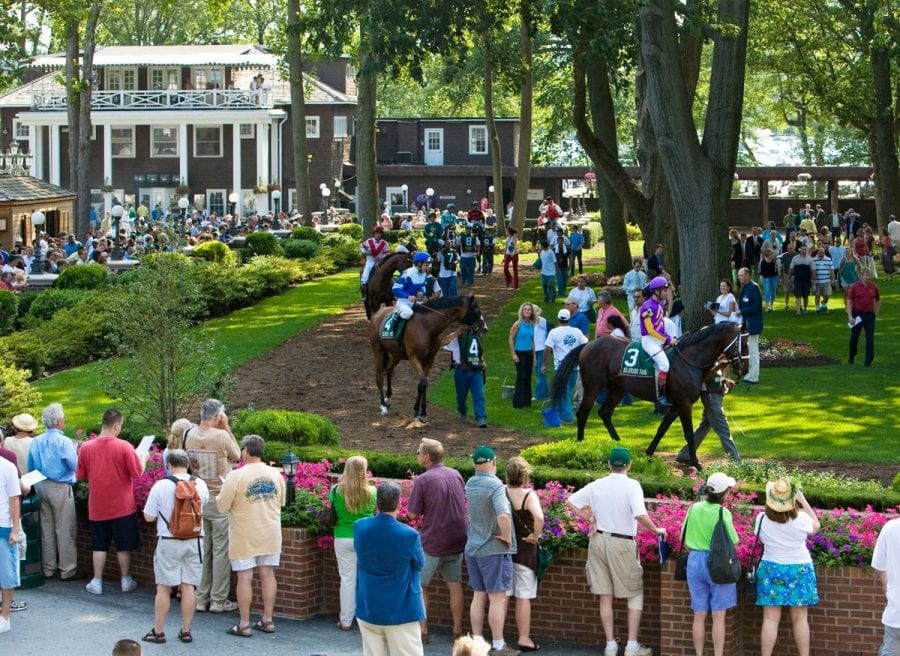 A fashionably late crowd is beginning — but only beginning — to fill in some of the blanks in the Delaware Park grandstand.  Out back, in the Grove, families and tailgaters are sauntering towards the fence to watch the race from the clubhouse turn.

It’s probably 80 degrees in the pressbox, but that’s better than whatever it is outside.

The chart caller sings his staccato song: “6 a head, 3 a head, 4 a half,” outlining in minimalist terms the progress of the race.  His colleague has the Phillies-Mets game on the TV, which is likely the baseball equivalent of the nickel claimers rounding the track.  Three horses slug it out most of the way, which enables Victor Carrasco and Navy Wings to swoop in late and get the money.

A group crowds into the winner’s circle, and the simulcast feed informs us that the race is the International Society for Equitation Science Trophy Race.  Whatever that is.

It’s midway through Delaware Handicap day, and there’s a bit of buzz in the air.

It’s true, these days the Delaware Handicap is up against it.  A glance at racing Twitter accounts will tell you what you probably already know: the opening of Saratoga pretty much takes the air out of the rest of the East Coast racing balloon.  Tweet after tweet outlines what just happened at the Spa, with not a character to spare for any other track.

And Del ‘Cap day falls against the opening Saturday of Saratoga, pitting it against the Grade 3 Shuvee — which pulls from the same group of older fillies and mares — and the Grade 1 Coaching Club American Oaks, for sophomore fillies.

It’s not ideal for either track.  Todd Pletcher scratches Authenticity from the Del ‘Cap — where she was the 3-1 second choice — and opts instead for the Shuvee (and less money), where she figures to have it her own way.  Chad Brown makes the opposite decision, choosing the Del ‘Cap over the Shuvee for Summer Applause.

The result: six in the Shuvee, five in the Del ‘Cap.

Racing — with its dwindling coterie of fans and bettors — loses again.

Still, the Del ‘Cap is a great race whose past is written in racing’s history books.  Two-time winner Susan’s Girl resides in the Racing Hall of Fame, as does Cicada, twice second here.

The champion handicap mare has come through “Little Saratoga” in each of the last two years.  Royal Delta outlasted Tiz Miz Sue en route to handicap mare honors last year, and in 2011 Havre de Grace, defeated here by Blind Luck in an absolute thriller, rebounded to win both divisional honors and Horse of the Year.

And, if one of the traditional measures of a race’s importance is its longer term impact on the breed as a whole, the Del ‘Cap’s bonafides are in order.  A quick swing through the winners’ progeny finds names like Gulch, Easy Goer, Creme Fraiche, Go For Wand, Forward Pass, and Buckpasser — to name a few.

It’s a race that deserves better, you think, a more prominent share of the racing nation’s attention.

And then, in a maiden claiming event, two horses slug it out down the lane.  Suddenly you hear it, the increasingly urgent din of the crowd as the horses speed to the wire.

And you think: all that’s true, but there’s a crowd here, and the best filly in the land is in the house.  It’s Del ‘Cap day, there’s a bit of buzz in the air, and one way or another, what happens here today is likely to end up in racing’s history books.

(Featured image, of the paddock, courtesy of Delaware Park.)