From the grandstand, the inner oval at Colonial Downs looks more like Richmond International Raceway than the Secretariat Turf Course.  When standing on it, however, you know you’re not on asphalt.

Burning the Bermuda does several things for Thomas.  It blackens the ground to absorb sunlight beneficial to early season growth.  It removes the thatch that can choke growth and transfers nutrients from the leaf to the soil.  Bermuda won’t “re-green” after dormant periods, so with the burning Thomas no longer has to “cut and blow, cut and blow”. 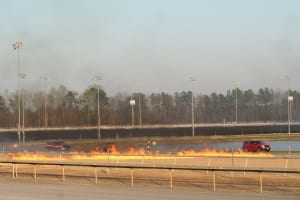 This year’s burning proved to be a bit of an adventure.  Fire department personnel standing by during the ignition were called out on an EMS call shortly after ignition.  The furlong between the grandstand and the tote board acts as a miniature wind tunnel.  But, thanks to plentiful watering of the perimeters and an evening lull in the winds, this year’s adventure didn’t take a turn for the worse.

The day after the burn, Thomas added his own special ingredient to his turf course when he dumped 12 tons of crumb rubber over what comprises Colonial’s dual turf course.  Crumb rubber has been used by many Virginia high schools in rebuilding their multipurpose athletic fields solely.  Thomas adds a small application, allowing it to work its way into the profile, a technique he learned from Villanova University.

“You can’t do it all at once.  You have to add it over a period of years,” explains Thomas.

Thomas uses a moderate dose considering the 1 & 1/8 mile length and 180 foot width of the turf course, mixing it into the medium to create mini-voids and to avoid over compaction.   The crumb rubber adds “give” without having to use so much water to soften the course.  At this moment, Thomas believes he will withhold the crumb rubber next year, satisfied now that his mild applications over five years have done the job, but it’s all subject to a core sampling at the end of Colonial’s season.

As you may have expected, it took Thomas several years to pitch management into such a diabolical scheme.  Torching Colonial’s signature asset six weeks prior to its annual debut and covering it with what appear to be “Nerds” candies made of tire isn’t exactly what many track managers go for, at least not right away.

Thomas’ spring schedule consists of burning, applying crumb rubber, punching holes (aeration) and applying chemicals for broadleaf weeds and growth.  It may sound like abuse, but participants and fans alike are rewarded with a magnificent racing surface by early June, the earliest time of the year Colonial can start racing on the turf.  By June, the warm season grass gets enough root growth that thoroughbreds can gallop over it.  Careful not to over-hype the innovative technique, racing officials have been pleased with the results but not only for the way the course greens up. 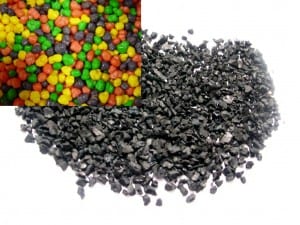 Crumb rubber versus Nerds (in the upper left).

“The number of breakdowns has been diminishing in the last four years,” noted Dr. Richard Harden, the track veterinarian for the Virginia Racing Commission.  “What’s causing that directly, I can’t say.  The turf does appear to have more give, more cushion.”  Despite an abundance of low- and mid-level horses, the breakdown rate at Colonial has declined from 2.5 per 1,000 starts in 2008 to 1.6 last year.

Colonial’s turf course was built from scratch in what was previously a valley.  Its base of gravel and sand was hauled in so it drains well.

“We’ve got a safe course that annually is at or below the national average on incidents per start,” states Harden.

There are so many outside factors that can be attributed to breakdowns, from the level of horses to the geometry of the course, that a direct relationship to this treatment and breakdowns is difficult.  The turf’s safety performance will be measured over the meets but if appearances matter, what looks like hell in spring looks great by summer.