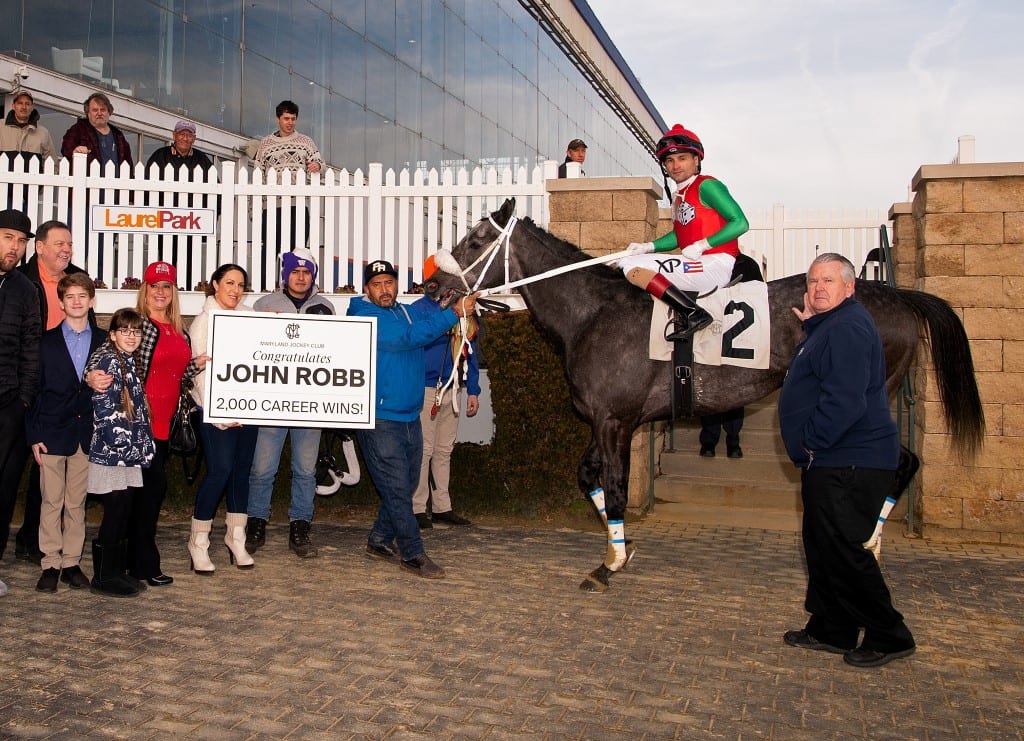 No Guts No Glory Farm’s Stroll Smokin was sent to the lead early and never gave it up in a one-length front-running triumph at Laurel Park to give trainer Jerry Robb his 2,000th career victory and cap Saturday’s stakes-filled Winter Carnival program.

“It would have been nice to get it two races earlier, but she ran good. She didn’t embarrass us,” Robb said. “It’s exciting and I’m very appreciative of it. I have to thank all my owners, all my help, my [riders], everyone. It’s a team effort.”

“It’s exciting. I’ve had a lot of highlights; it’d be hard to pick any one of them. Anna’s Bandit is a highlight,” Robb said. “I’m very proud because I did it with a small stable, 50 wins at a time. It takes forever. I doubt if I’ll make any more thousands. But, we’re happy with 2,000.”

Robb, 67, is a Washington, D.C. native best known for training Maryland Thoroughbred Hall of Famer Little Bold John, who raced 105 times with 38 wins and almost $2 million in earnings before being retired in 1993. His 25 stakes wins were a Maryland-bred record until surpassed by Ben’s Cat in 2016.

Currently, Robb’s stable star is 10-time stakes winner Anna’s Bandit, a 6-year-old mare who finished 2019 in a seven-way tie for most wins of any horse in North America with nine from 11 starts, including a six in a row to cap the year. She had her win streak snapped when finishing second in the Geisha Stakes Jan. 18.

Robb registered a career-high 114 wins in 1988 and has reached the $1 million mark in seasonal earnings 14 times, with a high of $2.3 million in 2002. A four-time meet-leading trainer in Maryland, Robb overall has had more than 12,000 starters and $36.5 million in purses earned since winning his first race with Hail Aristocrat at Penn National in 1973.

He has won nine career graded-stakes, five of them courtesy of Little Bold John from 1987-89. Other graded winners are He Is Risen, Lightning Paces, Pioneer Boy and Debt Ceiling, his most recent, in the 2013 Bashford Manor (G3). He also saddled Pulverizing in the 1989 Preakness.