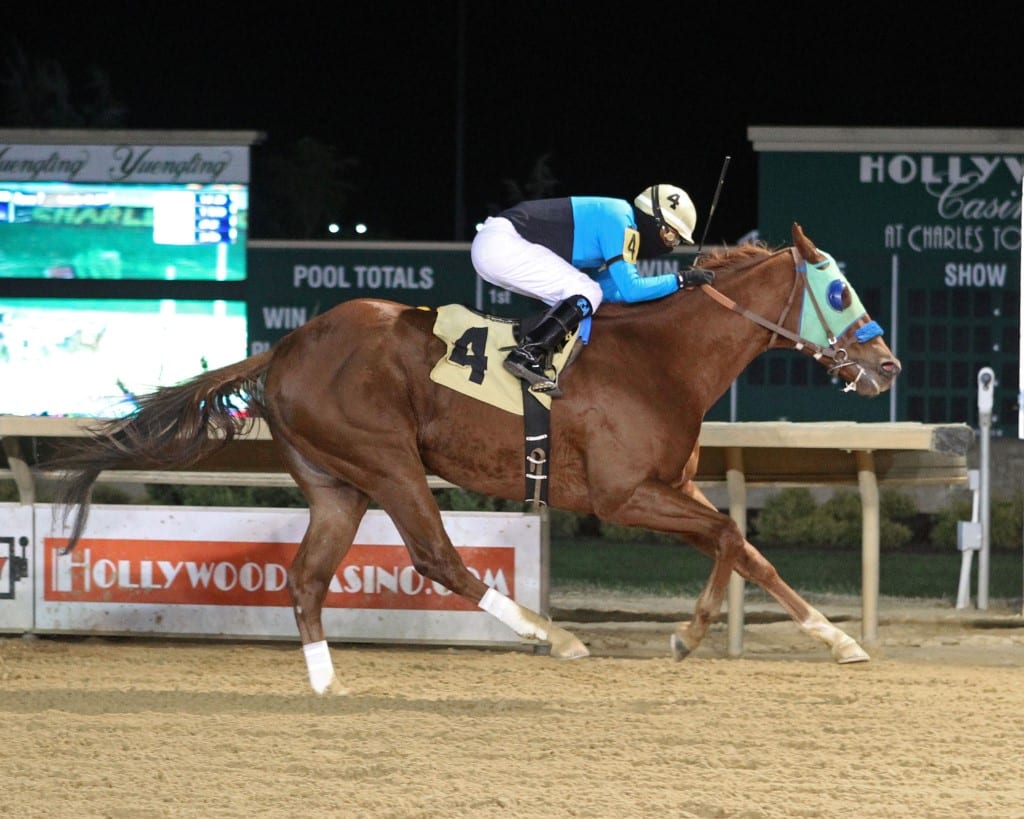 Penguin Power cruised to victory in the A Huevo Stakes at Charles Town Races. Photo by Coady Photography.

There’s no truth to the rumor that Saturday night’s $50,000 A Huevo Stakes at Charles Town Races was renamed the Jeff Runco Invitational.

It just felt that way.

Runco, frequently the leading trainer at Charles Town, sent out three horses in the 1 1/8-mile fixture, and they ran one-two-three virtually all the way around the track, with Penguin Power, the 1-2 favorite, leading throughout en route to a 1 1/2-length victory.

It was the seventh consecutive win for Penguin Power, a four-year-old son of top West Virginia sire Fiber Sonde. It was also his third consecutive win in stakes company, a streak which began in the seven-furlong Frank Gall Memorial in September and continued with a win in the seven-furlong West Virginia Thoroughbred Breeders Association Onion Juice Breeders’ Classic last month.

Overall, Penguin Power has 10 wins from 12 career starts and has earned $208,315. He has never finished worse than third.

A full brother to the multiple stakes winner Aye a Song, Penguin Power was bred in West Virginia by John McKee. He is owned by David Raim.

The A Huevo outlook changed last month when reigning top WV-bred Runnin’toluvya was slightly injured and ran up the track in the West Virginia Breeders Classic. Penguin Power had upset that runner, who got away poorly, in the Gall, but the question facing him was how he would take to three turns and a route distance.

With no Runnin’toluvya, bettors were plenty confident in Penguin Power, and they turned out to be right. Under Arnaldo Bocachica, Penguin Power broke alertly to grab the early advantage with only modest pressure from stablemate Opera Nite, with Luis Batista up. They were one-two, with Penguin Power holding a one-length lead, after a half-mile in 49.31 seconds.

The third Runco runner, North Atlantic, who won this event in 2017, was third, another length farther back.

And that was the running order the rest of the way, through six furlongs in 1:15.50, a mile in 1:41.20, and the nine furlongs in 1:55.36. Penguin Power was 1 1/2 lengths clear at the end, with North Atlantic another three-quarters of a length farther back, West Virginia Breeders Classic winner Castle Bound could mount only a mild rally for fourth, a neck behind North Atlantic and a neck ahead of Mean Bean.

CHARLES TOWN NOTES Bocachica won four races on the evening, teaming up with Runco for three of those… Rider Denis Araujo won a pair of maiden special weight races, with Best to Be Me, trained by John McKee, and Tamaqua, for trainer John Carlisle…